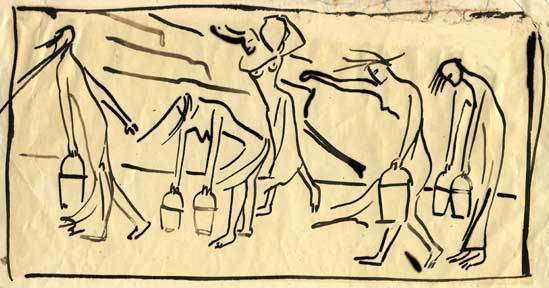 Devon, PA.  Thanks in part to the series of fine essays John Médaille has provided us during the last several weeks, the implicit economic vocabulary on the Front Porch has added to that of the Agrarian that of the Distributist.  All writers here have articulated the nature of place as one of limits, as something that shapes, binds, obliges, and even disciplines us, and some have emphasized that the family farm does this in a unique and inimitable way.  It has perhaps not always shown forth clearly that an Agrarian society is not one in which everyone is “reduced” to farmers, but one in which agriculture provides a society its type, its norm, its understanding of what is good.  Nor perhaps might it have been obvious that the particular claims of the Agrarian trace at least one of their roots to the abstract principle of private property that historical Distributism defends.  (Mark Mitchell has written on Hilaire Belloc twice, and Patrick Deneen on G.K. Chesterton, so perhaps Distributism will have struck some readers as more obviously informing FPR than I suggest).

If life on the land should be an everyday blessing–the way of life that, as it were, most persons should live–then behind that prescription lies also a belief in the goodness of ownership.  Private property, as Thomas Aquinas argued, is a multifoliate good for the human person and for human society as such.  Thus, Distributism is that economic philosophy that refuses the boostering of a free market as either an instrumental good or a good in itself, and refuses also the pleas of the socialist for the state’s ownership and distribution of property according to some bureaucratic rule.  The Distributist contends that private property constitutes one necessary element of the good life for man, the political animal, and that, therefore, as intrinsically communal or social, man desires the widest possible distribution of private property among his fellows, not to mention property for himself.  The highest end of all economic activity should be the creation and cultivation of private land ownership supporting private households.

To be disabused of this first superstition, one would do well to converse with a libertarian.  To be disabused of the second, one need only look around oneself, or read some of the quantified data Lew Daly provides us in his FPR essay, to suspect some other measure and means of prosperity must be possible.  But the third superstition I hope I may reserve to myself the pleasure of exorcising in the aforementioned essay.  There, I follow Hannah Arendt in insisting on the specious conflation of the idea of private property (which Aquinas was right in defending as necessary to a good society) with that nefarious invention of modern usury, unlimited wealth accumulation:

Private property is not a euphemism for anything I happen to acquire, but a reference to the place in the world that is necessarily mine if I am not to be reduced to dependence on another. The way to secure such property is not usually to expand it and widen its frontiers (though that may sometimes be the case), but to fortify it, to fill it with the productive means necessary to maintain it and for it to maintain me. That kind of security and self-sufficiency-in a word, autonomy and autarchy-requires stewardship and conservation rather than expansion and avarice. Such virtues serve the purpose of having the property remain my property with a permanence approximating to the solidity of its literal foundations. If one cannot reasonably imagine one’s children and grandchildren still cultivating one’s own land and household, one probably has not made them sufficiently private or sufficiently one’s property.

The early modern defenses of private property did not have such permanence in mind, except as a residue of the long western tradition of private ownership. They sought rather to expand the definition of property beyond its literal signification to include anything individual human industry and ambition might acquire; wealth-in all its placelessness, its liquidity, its versatility, and its instability-replaced property. The reasoned defense of a place in the world to provide for, and so relieve one of the burden of, life’s necessities; a place to house the fragile human life in the moments when it bows to its inexorable needs; a place that contained, limited, and secured, was reconceived in a defense of endless, material, and yet abstract acquisition. And so, we reply to the capitalist that he does not defend private property but, instead, rationalizes endless wealth accumulation, and in so doing he does not defend the one, best hope for the wide distribution of private property. He advocates, rather, the source of its usurpation and dissolution.

The essay proceeds to set forth private property rightly understood as the economic good par excellence for society.  It is a public good but also provides for the individual household the basis for what is itself a great good, the foundation of a family’s liberty: autarchy.  And the autarchy of the family household, I contend, is the analogous foundation, the microcosmic model, for still another public good: the sorely needed autarchic independence of our country.

On this note I conclude by way of  explanation for why I began with the suggestion that Distributism adds something to Agrarian thought that may necessarily lurk in the background but does not always stand forth as obvious.  The principles of the private family farm-a discipline and diversity that make for self-sufficiency-are the root principles of any truly prosperous and sustainable country as well.  One need not desire to return to the land and till it in order to understand something of great and imperative consequence; the obscene use of the phrase “homeland security” over the last decade may have benumbed us to its luminous truth.  We all rightly, as persons and as citizens, desire to be secure; the surest and most rewarding path to such security will be found less in the strategic fortification of the homeland and its thorough wiring with intelligence services and more in the making of the homeland into a productive, self-sufficient place.  That family flourishes best that is most secure in its ownership; our country would be more secure if it learned once again to grow and make everything it requires for itself, and to reduce or eliminate its dependence on the labor and resources of foreign nations.  Property makes for autarchy and autarchy is the most incontestable material condition of prosperity.