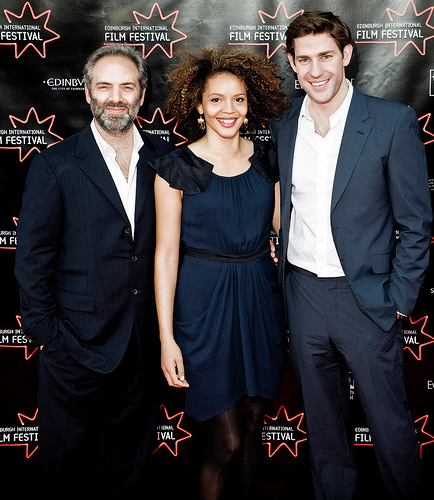 “Away We Go” – the new movie co-written by Dave Eggers and Vendela Vida, directed by Sam Mendes, and starring John Krasinski and Maya Rudolph – is a powerful story of American placelessness, the story of a thirtysomething couple who are trying to put down roots when every connection they have has been uprooted, who are trying to settle down when everyone they know is unsettled.

Or, in my husband’s words: “This is the perfect story for our demographic.”

(Warning: I am going to spoil the ending of this “perfect story for our demographic” below, so beware. Another warning, while I’m doing warnings: If you’re planning to see this movie, plan to encounter some of the most poignant cursing you have ever heard.)

When the movie begins, Verona and Burt are living near his parents, mostly because they want to raise their child near family. (Her parents have been dead for a number of years.) But halfway into her pregnancy, his parents announce that they are finally going to live their dream – by moving to Belgium. They’ve rented out their house and won’t be back for two years, and aren’t Verona and Burt happy for them?  Burt’s parents are oblivious to the fact that in living their own dream, they’re abandoning their soon-to-be-born grandchild. Or they’re not oblivious, and they don’t really care.

Either way, Verona and Burt decide that they need to find some place to live where they know someone. And thus begins their trek across North America.

It is a hilarious trek and a hilarious movie, which it has to be because the storyline is really so sad.

Everywhere they go, Burt and Verona find families in some kind of disrepair, with a relationship to place that is tenuous at best. Everyone in the film has moved to where they are from somewhere else, cobbling together some kind of idiosyncratic life. Even the kind of minimal connections that Burt and Verona seek elude them.

In the end, there turns out to be a family home, after all – Verona’s sister has never sold the house in which the two of them grew up – and it is a beautiful old farmhouse, too, located on a lake that must have been added in a special-effects room somewhere. The ending of the movie probably has to be what it is, plot-wise, but it is highly improbable.

Few of my students are growing up in the places where either of their parents grew up, and usually their parents grew up in different places. Many of them – at least the wealthier ones – are barely out of the door before their parents sell the family house. (A common story, for instance, is: “Well, my parents only lived in [insert name of town] because of the school district, so now they don’t have to live there anymore.”) For those students, the real-life Burts and Veronas, the loss is preordained and out of their control: Even if they wanted to return to a childhood or ancestral home, there isn’t one to find.

Often, I wonder how much of what people call America’s “cosmopolitan elite” is cosmopolitan – or at least detached from place – as a matter of choice.

Having a home is a hard thing in America, more a matter of work and effort and luck than a matter of inheritance or history.

On Saturday, Claremont had its annual Fourth of July extravaganza. The day included a 5K race, a fair, parties, fireworks, a parade (in which, I should tell you, my husband and I marched on behalf of the threatened Bernard Field Station). Before we went to bed, I asked him what his favorite part of the day had been.

He didn’t hesitate: “Starting to feel like a part of this place.”