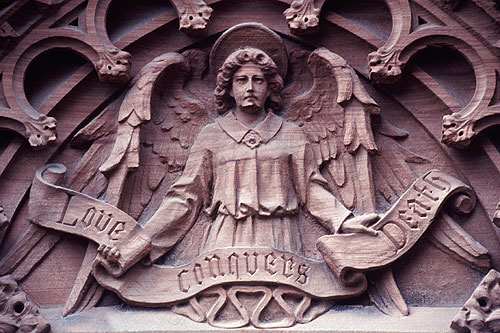 I have just returned from two weeks in England, were I was more or less out of touch with the internet. The occasion was a conference at the University of Nottingham on “Christian Social Teaching and the Money Power,” which Chris and I extended into a tour of York, Edinburgh, and Manchester. The conference was great, and made even more relevant by the release of Caritas in Veritate, more of which in a moment. York was fantastic, and the Yorkminster Cathedral (the largest Gothic cathedral north of the Alps) was tremendous.

Edinburgh calls to mind Mark Twain’s remark that “The coldest winter I ever spent was the summer in San Francisco.” 51 degrees really isn’t winter, but with the rain and wind it was a pretty good imitation for July. Nevertheless, the town is beautiful, and well worth the trip. We also visited Rosslyn Chapel, which was made famous by the “Da Vinci” code films. The guide was rather contemptuous of the movie, as he should be, but the publicity has generated funds for the restoration of the chapel, which is good. The chapel is a jewel, a Gothic cathedral in miniature. All the things which are grand but distant at Yorkminster are close and personal at Rosslyn. The chapel was barely saved from destruction during the Reformation, although later Cromwell did stable his horses there.

Speaking of the destruction of the Reformation, we also visited the ruins of St. Mary’s abbey in York, which was a magnificent structure, and its ruins give one some idea of the senseless and pointless destruction and violence of the English Reformation. One gets the same feeling of fury and sadness looking at the ruins of St. Augustine’s abbey in Canterbury. Stripped to its foundations and some of the undercroft, one does get a real sense of the scale of these building projects, the faith which raised them, and the sheer hatred and greed that destroyed them.

Still, the destruction of a building is one thing; the destruction of a teaching is quite another. On any given teaching, there are always interpretive disputes, and good men can come to opposite conclusions. One need not always question the good will of those who hold opposing interpretations, but we can question whether an interpretation is being subjected to some other agenda. One recalls the “Pope Endorses Capitalism” headline in the Wall Street Journal after the publication of Centesimus Annus. This was a rather strange interpretation of an encyclical that denounced the “the human inadequacies of capitalism and the resulting domination of things over people (33)” and stated that “it is unacceptable to say that the defeat of so-called “Real Socialism” leaves capitalism as the only model of economic organization (35).” Nevertheless, this interpretation of the encyclical dominated the public discussion, if not the academic and theological one. The Wall Street Journal’s headline was backed by neoconservative pundits such as Michael Novak and George Weigel. For the neocon, the question was not “Capitalism, yes or no?,” but “Capitalism, how much or how little.” And the only real debate they permitted was whether any concessions ought to be made to social justice and the common good. In practice, they conceded very little to either, and read the encyclical as an endorsement of capitalism, which it manifestly was not. This view, alas, dominated the public interpretation, and the effect of the encyclical was thereby muted in America.

Now we have a new encyclical, Caritas in Veritate, and a new interpretive battle. This battle will be quite different from the last one. Now there can be no doubt that an encyclical that mentions “justice” 50 times and “redistribution” of wealth eight times posses tremendous difficulties for the neoconservative view. Indeed. George Weigel, who did so much to undermine John Paul’s social teaching, has as much as admitted that he will not be able to do the same job of destruction on this Pope. Weigel’s initial take in National Review Online poses an elaborate historical fantasy about both this encyclical and its predecessor, Centesimus Annus. Basically, Weigel is claiming that Benedict wrote only small sections of the encyclical and doesn’t really believe in the rest, but was forced to sign it by a shadowy (but unnamed) “peace and justice” faction in the Vatican. Weigel names no names and cites no facts, but undoubtedly his next post will claim that proof of this conspiracy is buried in Rossalyn Chapel, right next to the Holy Grail and the Jesus’s marriage license to Mary Magdalene.

More of Weigel’s fantasies in a moment, but first, the reasons Weigel must resort to such outlandish conspiracy theories. Benedict in this new encyclical has consciously revived the thought of Paul VI, that most reviled of modern popes. Paul wrote, among other things, two highly controversial encyclicals. Populorum Progessio enraged the neocons and Humanae Vitae outraged the liberals. Benedict has combined the thought of both encyclicals into Caritas in Veritate, and the neocons are already expressing their outrage. Benedict proclaims that PP is the Rerum Novarum of our time, and this new encyclical is on its fortieth anniversary, making it the Quadragesimo Ano of our time. Those who are familiar with the history of Catholic social thought will immediately recognize the significance of this, but for those who don’t, let me point out that QA introduced the term “social justice” into the Catholic lexicon, a theme which Benedict expands upon at great length. Benedict makes two over-riding points. The first is that any sane economy must be subordinated to justice (your humble blogger is particularly pleased with this point, since it is the basic theme of all my work). Charity is, in truth, intrinsic to economic order. This theme is offensive to neocons, who insist that economics is a science on the order of physics, and no systematic moral considerations can be relevant; morality is completely confined to the realm of individual actions, and not a consideration of economics per se.

The second point follows from the first. Benedict insists that the concern for life, from conception to death, is intrinsic to human development, and therefore to economic development. Those who have little concern for the baby, at whatever stage, will have, for example, little real concern for the environment, whatever they may claim. Taking the two together, Benedict has produced a brilliant examination of the failures of modern capitalism in the light of the teachings of Paul VI. It is carefully worked out in a well-developed thesis and in detail not often seen in encyclicals that deal with topical subjects.

Weigel posits his historical fantasy because he has no other response. He can only encourage Catholics to disregard the Church’s teaching by spreading rumors of a Da Vinci Code-type conspiracy which relieves Catholics of the duty they have of taking the encyclical seriously. In other words, Weigel can defend his position only by attacking the pope and the Church. Better he knock down a few abbeys, or stable his horses in the sanctuary, then posit such fantasies (which, Da Vinci-like, he never actually documents) and encourage open dissent.

Cleanup in pew 16. Weigel has read the encyclical and his head has exploded, leaving behind an awful mess. I would not for a moment attack the sincerity of his Catholicism, but I will note that throughout his sad career, he has been more concerned to preserve a rather “liberal” conservatism then to defend the actual Church that claims his nominal adherence. For the rest of us, Catholic and otherwise, we can note with amusement the neocon quandary, but we can read the encyclical for ourselves; we may agree or disagree, without resorting to the subterfuge of a Dan Brown conspiracy theory, no matter how well this might sell. Weigel and Brown have sold their conspiracies in the past, but this time I think they will have greater problems.