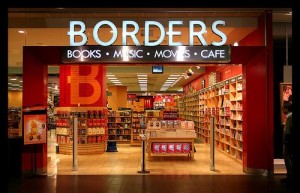 Kearneysville, WV. Question: what do these two books have in common? A Garfield the Cat book and My Horizontal Life: A Collection of One Night Stands. Or what about these: A book on Mother Teresa’s spirituality and Holy S**T: The World’s Weirdest Comics featuring, on the cover, “Tales from the Leather Nun,” complete with a bare-breasted woman. Answer: these books are paired alongside each other at my local Borders. Presumably, the Garfield was intended to attract the kids whose parents, perhaps, could then browse the confessions of a randy woman while they waited on their tots. I’m less sure about the intention behind the second pair. Part of me hopes that these incongruities are the work of an employee who is silently, but symbolically, rebelling against perceived social norms. Unfortunately, in all likelihood, no such person is at work, and these juxtapositions are completely random acts of carelessness. I find this second possibility to be far more disturbing.

If this act was intentional, that would indicate a sense, or at least an awareness, of propriety and a desire to offend. Rebellion requires a set of norms that are pushed against. Or to put matters in religious terms, heresy requires orthodoxy. And if there is an orthodoxy, there is hope, for there is a stable set of beliefs and commitments by which a community lives, and against which some rebel. An orthodoxy can change, but even in the change, there is continuity, and that continuity provides structure, stability, and a communal sense of propriety.

On the other hand, if, as I suspect, those books were placed together on the displays for no reason other than chance, we have good reason for concern. In such a case, the sense of propriety (against which one might rebel) has been replaced by apathy. Or perhaps not apathy so much as a lost ability to make distinctions. When we lose the ability to distinguish between the silly and the serious, between the public and the private, between the sacred and the profane, we have lost the ability to live as civilized human beings.

These books at Borders can, I think, stand as a symbol of our cultural astigmatism. And as odd as it may seem, I think we can learn something about our current economic troubles, for at root our problems are not economic at all. Instead, they are complex issues tied invariably to a culture that does not recognize the impropriety of placing a book on Mother Teresa’s spirituality beside one depicting the bare breasts of a cartoon vixen.

Such a world is one where limits have collapsed. In our headlong rush to embrace the fruits of our individual freedom, we have forgotten that freedom without propriety leads to irreverence, irresponsibility, and ultimately, disintegration. The economic turmoil our leaders are laboring so mightily to stave off is the product, not of anonymous market forces, but of our failure to respect limits.

A sense of propriety provides limits for individual and corporate action. Limits create stability; they give form and meaning to society, like a skeleton gives form to the body. When a broad consensus on what constitutes propriety is lost, the sense of limits collapses. Form is reduced merely to a massive lump where distinctions are lost; where sacred means nothing and therefore nothing is profane; where all things are made public and privacy loses its meaning; where the silly and the serious mingle and no one knows whether to laugh or to mourn.

We have been told that we can be rescued from our financial woes by a massive infusion of money. We have been told that all means must be employed to protect our way of life. But why are we not being asked to take a hard look at our way of life? Perhaps it is precisely this way of life that has brought us to such dire straits. When Americans fail to see the impropriety of running up record levels of consumer debt, we should not be shocked that our public officials do not hesitate to spend hundreds of billions of dollars to shore up our way of life even at the expense of our children and grandchildren. Surely we have lost a sense of propriety when we are willing to secure our comfort at the expense of future generations. The solution to our troubled times is not, primarily, a government-sponsored bailout. That is the easy way that asks nothing of us save the tacit permission to write more checks against the wealth of future generations. The real solution is a restoration of a sense of limits—of responsibility born of propriety. If we choose this harder but better way, our grandchildren will thank us for it. If we don’t, they will, as they should, rue our lack of restraint as they chafe under the burden of our irresponsibility.

This essay was orignially published in Touchstone: A Journal of Mere Christianity (April 2009).