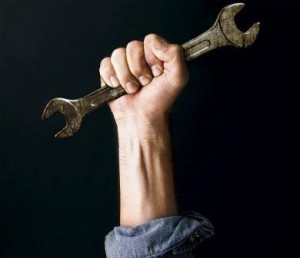 Kearneysville, WV. At 10:00pm on New Year’s Eve 2008, just as his shift was ending, Patrick McCarron was asked to turn in his badge and keys and to clean out his locker. This was his first official notice that his facilities maintenance job had been terminated. So this father of five young children, went home, celebrated New Years with his family, and on January 2 went to work for himself.

On Labor Day, I sat down with Patrick to ask him about the past eight months. “I knew I was ready,” he told me. “I could take the skills I’ve acquired in thirteen years and apply them on my own.” I asked him how he broke the news to his wife. “I told her this was a new beginning for us, a new chapter.” He’s been working steadily as a handyman ever since.

When his job was terminated, it didn’t come as a complete surprise. Rumors had been circulating for some time, so he made preparations. He began saving as much money as possible; he began doing odd jobs on weekends; and perhaps most importantly, he began to prepare himself mentally for the possibility that a major change was possible. When the news finally came down, Patrick and his family were ready.

While the loss of a steady paycheck was, understandably, the most difficult aspect of this change, he doesn’t miss the 42 mile (each way) commute that cost him one hour and twelve minutes twice each day. Nor does he miss the culture of indifference that characterized many of his former co-workers. “It wasn’t a workshop, it was a hideshop,” he explained, shaking his head. “People attempted to get out of work. They were always quick to defend their rights, but never quick to put out.” Continuing, he noted that “there was a perverse incentive structure: if you worked hard, you got paid. If you shirked, you got paid. That’s exactly the opposite of what I do now because I have to produce.”

Productivity is something Patrick has been forced to think about a lot in the past few months. The success of his new venture is directly related to what he produces. He is struck by the contrast between this reality and the way many of his former co-workers operated and how the denizens of the cubicle can do the same. For too many “economy and livelihood are not predicated on productivity. People can waste time at work on the internet and still get paid.”

One thing he especially appreciates about his new job is the freedom. “I love the flexibility. It allows me to be creative in performing certain tasks. In my other job we were constrained by rules and prescribed procedures.” He notes that this flexibility is most obvious when it comes to tools. “The best thing is I get to use my own tools. I can use the tool that suits me. In my other job, the contractor was responsible to provide virtually all the tools.” He was constantly frustrated by the fact that some of his co-workers didn’t take good care of the tools they were all required to use. He now buys and uses his own tools and appreciates the fact that he is accountable for them. In addition, he is free to organize his own day. “I’m not confined to an eight hour day. I have a strong incentive to maximize my time, to do the best job possible, so I can survive.” But the new-found freedom is not without constraint. “I’m free to choose my work and my price, but now that freedom comes with responsibility. In my other job, I was just a cog in the wheel, and although I worked hard, the incentive was less.”

But with this new freedom, also comes a greater sense of risk. In his old job, “the work was supplied. Now I have to find the work myself. This creates a strong incentive to present myself well so people are willing to have me come into their homes. I have to consider things beyond the work, itself. I avoid slang, use good language, and dress neatly. I keep a clean polo shirt in the van in case I need to meet a customer to discuss a job.”

This new life has, Patrick told me, been harder on his wife than on him. “Every week and every month are different. Some are very good. Some are tight.” This has forced his family to live frugally. “I try to save as much as I can. I avoid credit cards. I’ve taken out no loans. I did have a bit of money squirreled away and if I need a loan, I borrow from myself and pay it back on my own terms.”

I asked Patrick if he saw this less certain situation as a stop-gap measure between permanent jobs or if he hopes he can make it work for the long term. He didn’t hesitate with an answer: “I want to see this extend indefinitely. I love to go to a person’s house, solve their problem, and get paid for it. I hope this can last. I don’t see it as a stop-gap measure.” He continued: “In a sense, the monetary reward is secondary. I want each job I do to be a work of art, even something as mundane as painting a wall.” He leaned forward to make the point: “a satisfied customer is the best reward.”

Of course, Patrick’s transition was possible because he has marketable skills. He works with his hands, owns the tools of his craft, and can meet the needs of people who are willing to pay for his services. Writers as disparate as Matthew Crawford (Shop Class as Soul Craft), Hilare Belloc (The Restoration of Property), and Wendell Berry (The Gift of Good Land) have argued that there is a kind independence that can be achieved through the manual arts and the ownership of one’s land or tools that is not possible when one is part of the so-called information economy. That independence is clearly a bracing sort of tonic, one that Patrick finds exhilarating.

As we were finishing up, the phone rang. It was a customer calling about a small job. Patrick offered to come that very afternoon (on Labor Day) to take care of the problem. The customer decided it wasn’t urgent, but asked that he come later in the week to do the small job but also to begin a larger one. Such is the life of a self-employed handyman. May he prosper.