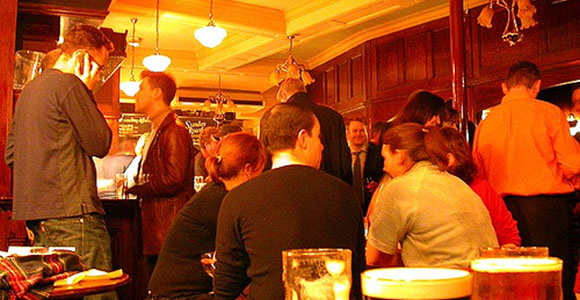 Claremont, CA. The news is dreadful: According to the Census, since 2006 we have been living in a republic where, for the first time in the history of the republic, Americans drink more bottled water than we drank beer.

Why is this important?  It’s important because beer is a socially oriented beverage, and bottled water is a privately oriented one.

Drinking beer emanates, albeit clumsily and with all the familiar risks, from essentially social impulses.  Most people drink beer to lower social inhibitions, to make it easier to have conversations with other people, to assuage loneliness, to grease the wheels for engaging in what my students euphemistically call “relationships” – in other words, to give a form and excuse for social life.  You don’t drink beer to improve your private, individual health.

By contrast, you don’t drink bottled water if you want to have an excuse to hang out with your friends.  Drinking bottled water emanates from essentially private or individual concerns.  It’s pretty straightforward, actually: you drink bottled water precisely because you do not want to drink common water; you literally do not want to sip from the public trough.   The ascendance of bottled water in America is yet another signal of the ascendance of a culture that is individually oriented, almost pathologically obsessive about bodily health, and suspicious of the public sphere.

Now, we political scientists have long recognized that one of the dominant trends in American life is the increasing atomization and isolation of the American individual.  More and more, Americans are retreating from the public sphere in all of its forms and falling back into what Alexis de Tocqueville described as “the solitude of our own hearts,” into a kind of apathetic insularity.  Robert Putnam, the Harvard political scientist, has described this as the “decline of social capital” in America – the deterioration of almost every organized community and social bond that makes for a vibrant civic life.

In terms of small-d democratic life, of course, this is a dangerous trend: The less people’s lives are outward-looking, spent outside and with others, and the more people’s lives are inward-looking, spent inside and on insular terms, the less care attends to the public sphere.  And as a number of political scholars have pointed out, any time you have a pervasive and soft indifference to the public sphere, you are likely to develop a politics that loses its moderation, that becomes ever more polarized, dominated by extremists and oligarchs.

Now, it seems, that danger is at an all-time high.

The American retreat from the public sphere and associational activity now extends, apparently, beyond the avoidance of often frustrating and tedious civic rituals like attending a town council meeting or running for a seat on the PTA.  Now that avoidance seems to have extended into the fun and vaguely bacchanalian civic rituals, like going out for a drink after work.

This is the kind of thing that, well, makes me want to go out for a drink.

How to Make and Lose Friends (& Influence a Few People):...