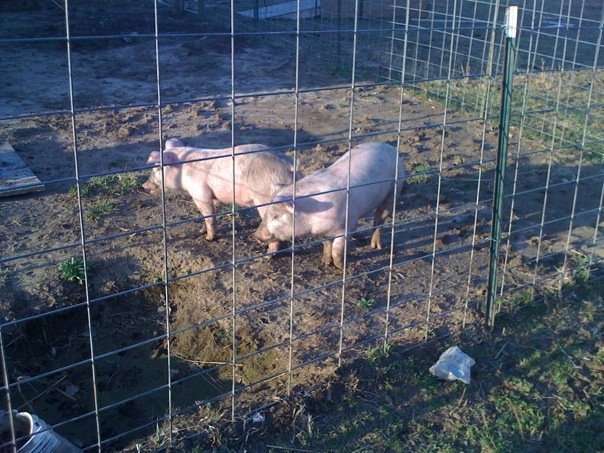 Let this day begin again the change of hogs into people, not the other way around, for today we celebrate again our lives’ wedding with the world

— Wendell Berry, “For the Hog Killing”

It takes three generations to make a farmer.

JEFFERSON COUNTY, KANSAS. Recently I have been reflecting a great deal on George Santayana’s comment that, “for myself, even if I could live to see it, I should not be afraid of the future domination, whatever it may be.”  Santayana went on to note that “one has to live in some age, under some fashion: I have found, in different times and places, the liberal, the Catholic, and the German air quite possible to breath; nor am I sure, would communism be without its advantages to a free mind, and its splendid emotions.”

Pictured above are this week’s newest arrivals to the Stegall farmstead.  I started raising pigs several years back.  I let our very first hog grow to mammoth size–clocking in at somewhere just south of five-hundred pounds–before finally deciding that his date with the reaper had arrived.  The boundless arrogance of a corporate lawyer used to getting his way in everything with a snap of the fingers in conjunction with the boundless enthusiasm and ignorance of a novice left me positive that to move this animal to the local butcher would be a cinch.  Just get in there and nudge the thing along.  No problem.  It’s just a dumb pig after all.  And I’m a lawyer.  (I know, it makes no sense, but take it from me, when they teach you “how to think like a lawyer,” that’s what they mean.)  At that time, the poor beast was still more ham and bacon to me than a free agent with his own ideas about his future.

You hear stories about wildlife heading for the hills minutes or even hours before a tsunami hits, or an earthquake.  Well I’m convinced the same principle applies to butchering day.  When I told the old timers what I was planning, they laughed in my face.  “Have fun with that!”  Undaunted, I pressed ahead with my plans, rigging a temporary chute with cattle panels for the hog’s last walk to the truck that would take him to the butcher down the road.  I asked a few friends over to help out.

This much I learned that day.  A quarter-ton of live hog meat is strong. I maneuvered him into the chute without much difficulty, and then all hell broke loose.  Thrashing about, the pig made quick work of my temporary fencing, tossing cattle panels about like they were cardboard.  Obviously, sterner measures were required.  I had a 4×4 piece of plywood I used to push the beast along from the rear.  He promptly turned and did a full leap up over the plywood leaving me sitting in muck and mire while he calmly munched corn at the other end of the pen.  After an hour or two of these kinds of futile attempts, someone phoned a seasoned hog veteran.  “Put a bucket over his head.”

By this point, my friends wanted no more to do with this project.  So I slung a feed bucket and faced him down.  Lawyer vs. Nature–just like the Good Lord intended.  And what do you know, it worked.  I strapped my bucket over that old boy’s snout and held on for my life.  It took a few minutes of wrestling and rolling in the mud, but I did manage to work my bacon into the truck.  No Christmas ham has ever tasted so sweet.

In the several hog seasons since, I’ve stopped thinking so much like a lawyer and begun to haltingly think like a farmer.  Which is how Santayana was thinking.  A future of domination and crisis is no stranger to the farmer, he sees it every morning before the sun comes up.  But I can testify, that farm yard air is always quite possible to breathe!  Such splendid freedom!  Just don’t let anyone put a bucket over your snout.

Will Wendell Be Jailed?