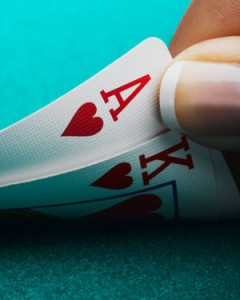 Jefferson County, WV. In December my county will hold a referendum to decide whether or not table games will be permitted at the local race track/slot machine palace. Only two years ago the same referendum was brought before the people who soundly rejected the proposal with more than 60% opposed. At that time residents were inundated with flyers and ads extolling the many benefits the county was sure to reap if gaming were allowed. Most significantly, the schools would, we were told, enjoy the monetary benefits of this windfall. Now, no one is going to deny that our public schools are in need of a shot in the arm, but apparently, that line failed to convince a majority of the citizens that the benefits would outweigh the liabilities.

Since this initiative was soundly defeated only two years ago, one might wonder why it is again on the ballot. Why must the good citizens of Jefferson County make the trek to their respective polling places to cast a vote on an issue that was decided only 24 months ago?

As it turns out, this may be the fate of Jefferson County’s citizens forever, or at least until they finally vote the other way. For you see, the law is rigged.  Here’s how it works. According to West Virginia State Law (§ 29-22C-7. Local option election), racetracks can apply to add table games to their offerings, but only if the county votes to approve the measure. The county commission is obligated to place the issue on the ballot if the commission receives a written notice requesting the vote. The commission “may” require that the petitioners pay the costs of the special election. All well and good, it would seem. The people decide.

Once the election date has been set, the gambling interests turn on the propaganda machine. Two years ago, we received flyers virtually every day leading up to the election. The vast majority urged us to approve the measure. Glossy images of happy families, smiling and obviously well-educated school children, and testimonials from local leaders all pressed us in the most compelling ways to open this floodgate of prosperity and happiness that was only a “yes” vote away.

As I said, the citizens rejected the flim-flam two years ago. But it’s back. And it will keep coming back, for the law states that this issue can be brought to a special election every two years. All that is required is a letter to the county commissioners.

But here’s the kicker: if the citizens are eventually worn down by the persistence of the gaming advocates and table games come to Jefferson County, an initiative to have the games removed cannot be introduced for five years. Furthermore, the anti-table game initiative can only get on the ballot if a petition is submitted to the county commissioners with the signatures of 5% of residents eligible to vote in the next election. Finally, the law governing the introduction of table games cannot be preempted by any local law. In other words, the citizens of a county cannot democratically pass a law forbidding the introduction of table games in their county. They must endure the ad campaigns and trudge to the polls every twenty-four months to again tell the gambling interests to go away.

But, of course, they won’t. This law appears to have been written by the President of the Gaming Lobby and his elected cronies. While I do not support the introduction of table games in my county, if the people of Jefferson County vote to allow this activity, fine. That this law is so blatantly structured to advantage a special interest and to disadvantage the democratic process is far more troubling. The apparent message is this: if you have a special interest and money, you have access, and access means influence. The average citizen is hardly a match for such collusion. And this rather small and, in relative terms, insignificant issue here in Jefferson County, WV is an illustration of what, I fear, goes on in state houses and in Washington D.C. all the time. Need a regulation to favor your industry? Pay up. The fact that corporations, for example, contribute to candidates of both parties is telling. Smart people don’t pay money if they aren’t confident they will get something in return. Elected officials too often play the game. Democracy is replaced by cronyism. Corporatism triumphs over small business.  Local self-government is constrained by laws intended to favor a few. The voices of the people are  muted by the special interests who have found a way to rig the system and, as a result, hit the jackpot.

Why I am a Monarchist