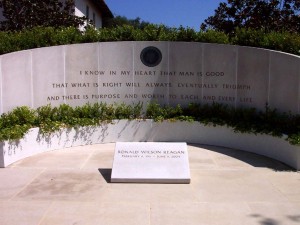 Writing on the occasion of Ronald Reagan’s death, the NY Times columnist David Brooks articulated the roots of Reagan’s success in as accurate and succinct a way as I’ve seen.  Reagan “revolutionized” American conservatism insofar as he transformed it from what had been a disposition to defend tradition and custom – and thus one with an orientation toward the past – to a movement motivated by a deeply optimistic belief in progress – and thus, marked by an upbeat view about the future and America’s providential role in advancing progress.  As Brooks wrote,

To understand the intellectual content of Reagan’s optimism, start with American conservatism before Reagan. It was largely a movement of disenfranchised thinkers who placed great emphasis on human frailty and sin, the limitations of what we can know, and the tragic nature of history.

Conservatives felt that events were moving in the wrong direction and that the American spiritual catastrophe was growing ever worse. Whittaker Chambers observed that when he left communism and joined the democratic camp, he was joining the losing side of history. In his influential book ”Ideas Have Consequences,” Richard Weaver argued that American society was in the midst of ”a fearful descent.” To describe modern life, the leading conservative thinker Russell Kirk used words like barrenness, sterility, inanity, hideousness, vulgarity, sensationalism and deformity.

Conservatives looked back sadly to customs and institutions that were being eroded. What was needed, many argued, was a restoration of stability. ”The recovery of order in the soul and order in society is the first necessity of this century,” Kirk argued.

Reagan agreed with these old conservatives about communism and other things. But he transformed their movement from a past- and loss-oriented movement to a future- and possibility-oriented one, based on a certain idea about America. As early as 1952 during a commencement address at William Woods College in Missouri, Reagan argued, ”I, in my own mind, have always thought of America as a place in the divine scheme of things that was set aside as a promised land.”

Reagan described America as a driving force through history, leading to the empire of liberty. He seemed to regard freedom’s triumph as a historical inevitability. He couldn’t look at mainstream American culture as anything other than the delightful emanation of this venture. He could never feel alienated from middle American life, or see it succumbing to a spiritual catastrophe….

Unlike earlier conservatives, he had a boyish faith in science and technology (Star Wars). He embraced immigration, and preferred striving to stability. On the economic front, he inspired writers like George Gilder, Warren T. Brookes and Julian Simon, who rhapsodized about entrepreneurialism and wealth creation.

Perhaps among the most revealing things about Reagan – and modern American “conservatism,” for that matter – is that Reagan frequently quoted from his “favorite” Founding Father, Thomas Paine, and in particular, Paine’s line “we have it in our power to begin the world over again.”  Paine – an eventual supporter of the French Revolution – was, of course a bete noir and chief critic of Edmund Burke, widely considered (correctly) to be the founding voice of modern conservatism.  What does it say of anything calling itself “conservatism” when a main source of inspiration is a thinker that exhibited a Gnostic hatred for the world?

Also revealing is Reagan’s epitaph.  The first line on Reagan’s California grave reads “I know in my heart that man is good.”  A conception of human sin, fallenness, and the propensity for evil – what historically might be considered to be  a defining feature of a conservative disposition is wholly absent in these few words meant to sum up Reagan’s life and legacy.  Such a form of “conservatism” bears little fundamental difference to the transformational optimism that has always marked Progressivism – the belief in the Gnostic possibility of human perfectibility ranging from such thinkers as Condorcet to Comte, Mill to Dewey, Emerson to Rorty.

Thus, I found it surprising over the weekend to read the concluding call in Steven Hayward’s fine essay in the Washington Post for conservatives to engage in a deeper and more sustained critique of progressivism Hayward is the author of an impressive new hagiographic book entitled The Age of Reagan (recently discussed, among other places, in Ross Douthat’s column), and worked under Reagan during the years of his Presidency.  He knows as well as anyone that one of the distinctive features of modern conservatism, born in the image of Reagan, is its grand transformation into the party of Progress – and no longer (to use Emerson’s categories) the party of Memory.   (Personal aside:  Steve and I have a Simon-Ehrlichesque friendly wager that oil will cost over $75 a barrel on June 2, 2011.  I like my chances, and fully expect to enjoy a nice and really expensive locally-produced dinner on Steve’s tab.  I should have added a small side bet on the price of gold).

Hayward concludes his reflection on the current lamentable intellectual state of conservatism thusly:  “The single largest defect of modern conservatism, in my mind, is its insufficient ability to challenge liberalism at the intellectual level, in particular over the meaning and nature of progress. In response to the left’s belief in political solutions for everything, the right must do better than merely invoking ‘markets’ and ‘liberty.'”

Sign me up.  But here is the rub:  how can any of the leaders of contemporary conservatism legitimately launch a critique of progressivism when so much of modern American conservatism is defined by the sunny brand of optimism launched by Reagan, and continued today by the likes of Newt, Mitt, and Sarah?  Where is the harrowing self-examination in conservatism’s complicity in what can only be regarded as the massive defeat of most recognizable core beliefs and commitments of a conservative disposition over the past thirty years, often of Republican party ascendancy?   Have we strengthened our communities?  Have localities gained more opportunity and capacity for self-rule, with power devolving from the center to the peripheries?  Have we enacted robust forms of subsidiarity?  Are families at the heart of our personal and national commitments?  Have ideals of morality and virtuous character been maintained, much less been strengthened?  Have religious commitments deepened, and in particular, provided strong resources against a dominant culture of hedonism and materialism?  Have our schools and universities aided in supporting these and similar commitments?

If “conservatism” over the past thirty years has achieved anything, it has been the evisceration of older virtues such as thrift, moderation, self-sacrifice and a certain stoicism that might have prevented broad swaths of the population from gorging themselves in a credit fiasco generated in the belief that we could forever have something for n0 money down.  It has been in the forefront of efforts in the international realm to remake the world in our own image, a neo-liberal paradise of hedonic-based markets, the wanton exploitation of nature, and the destruction of those communities and cultures of stability and continuity that provide not only “family values,” but the proper understanding of what constitutes living well.  The progressive John Dewey argued that the aim of all life was “growth”; have conservatives, so-called, argued otherwise?  Or are we all now partisans of a process that can only be said to culminate in cancer?

Hayward says a mouthful in his concluding sentences, but one wonders if he really knows what it would mean seriously  to begin to question the “liberal” commitment to progressivism, and whether he (and others) are willing first to look at the logs in their own eyes before they pluck out the speck in the eyes of their brothers.   If modern “conservatism” really wants to discover where it went wrong, it could do worse than picking up a few volumes by those thinkers that Reagan and others discarded – such as Kirk, Weaver, and Nisbet, among others – and, by all means, easing their Paine.

What Has Postliberalism to do with Jerusalem? A Review of ...