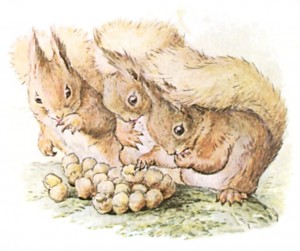 “What a good country or a good squirrel should be doing is stashing away nuts for the winter. The United States is not only not saving nuts, it’s eating the ones left over from the last winter.” WILLIAM H. GROSS

The New York Times reports on its front page today that annual interest payments on the national debt will exceed $700 billion by 2019, compared to $202 billion today.

In concrete terms, an additional $500 billion a year in interest expense would total more than the combined federal budgets this year for education, energy, homeland security and the wars in Iraq and Afghanistan.

Meanwhile, Bloomberg reports today that the price of an ounce of gold has hit yet another all time high, jumping another 2% to $1,170. Oil is back around $80 per barrel and the dollar remains in a slump, around $1.50 per Euro.

I feel like a broken record summarizing this recent news about the bankruptcy of America, but it needs to be stressed: we have decided as a nation to respond to finding ourselves in a deep hole by digging deeper. Not surprisingly, as our mothers used to tell us, if you keep digging a hole in the ground, eventually you’ll find yourself in China.

The print edition of the Times relays what most of us know: there are only four ways out of the current morass – and only one, they report, is “painless”:

Every “leader” is hoping and praying for the last, but we should be clear about its prospects: almost all of the “growth” of the past several decades has been illusory, built on a firesale of America’s mid-century wealth in a gambit to hold onto our top spot for just another election cycle. Every administration has simply kicked the can down the road while ramping up the outsourcing, the “globalization,” and, above all, the borrowing. We have been a national version of Michael Jackson, living in “Neverland” while borrowing against the things of value that we once possessed from an Asian organization willing to “loan” until it owns us. Like him, we’re having trouble sleeping at night, and like him we’d rather narcotize ourselves (if on our hundreds of cable stations) rather than face facts.

I think it’s highly implausible that there are many more tricks that can be devised that can in turn pretend to be “growth.” Our recent “boom and bust” oscillation that we call the economy has been a string of makeshift efforts to prop up a sinking ship. We have learned that the internet is a sink hole for money, since all it can “produce” are advertisements that can’t ultimately sell products if its viewers are broke. We have already seen the result of the “financialization” of the entire economy, an economic design that ultimately had to feed on itself. We have sucked whatever nominal value from our “homes,” the places that ought to be secure against the foolishness of the age. We have already sought to re-inflate the balloon one too many times, most recently not only by bringing interest rates to zero, but by printing and borrowing funds faster than three generations will be able to pay back. Like a hamster on an dirty-coal electric treadmill, we can’t get off and we can’t slow down, but the speed required to keep the contraption going is getting too fast for our small legs and tinier brains.

Frankly, the idea that “growth” is the one option that will prove itself to be “painless” is laughable, when we consider that much of our current pain is the result of illusory growth. And with our various gimmicks like “cash for clunkers,” “socialism for the rich,” tax “rebate” checks in the mail and so on, as the way we claim to re-boot “growth,” one can only guffaw at the illusion that we can somehow permanently escape the hard bookkeeping of Reality’s ledger.

Brutal honesty requires us to acknowledge that only three options realistically confront us: 1. less government for more money; 2. inflation; and/or 3. default. Any of these will leave us poorer and more miserable. Which poison will we be forced to “choose”? What will be the public response? The populace has grown so accustomed to having it all – demanding low taxes and cradle-to-grave nannying, electing Republican tax-cutters while insisting on the continuation of every program. Let us stipulate that they will be ill-disposed to hearing the bad tidings. If “tea parties” are the order of the day when we still manage to keep this creaky and leaking boat afloat, what will be the reaction when we begin to sink? When it’s discovered that, once again, there are too few lifeboats? Will we stiffen our upper lip, allow the women and children their places, and sing “Nearer My God to Thee”? Or, will there be a mad scramble for the exits, in which the lucky will manage to get out by stepping on the corpses of those caught under the crush? Will our tea parties become “Black Fridays,” with desperate consumers looking for that one last piece of the pie to consume, charged to their overextended credit cards, before the plate is empty?