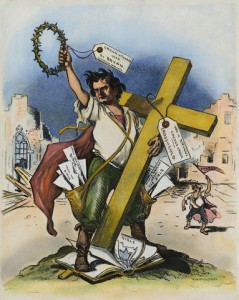 Tonight I happened to attend a pair of extremely interesting, and strikingly juxtaposed, events. The first was a Bradley Lecture at AEI delivered by Peter Berkowitz entited “The New Progressivism.” According to the description of the lecture – which is a fairly accurate summation –

Thereafter, I was caught up in a general exodus to a book party a few floors below AEI in the offices of the Weekly Standard, where revelers were toasting the publication of Matthew Continetti’s latest title The Persecution of Sarah Palin.

Both of these events, serendipitously or not, were devoted to the exposure of Left elitism toward ordinary opinion. Both sought to highlight the close alignment of progressive elitism on the Left and populist sympathy on the part of the Right. Both partook of the longterm narrative that has defined the realignment of Populism from a Left anti-elite suspicion of economic concentration to a Right anti-elite suspicion of Statist concentration. And, both struck me – occuring as they were in the heart of the imperial metropole of Washington D.C., attended by the extremely well-heeled, cosmopolitan metropolites, that something was askew.

Peter Berkowitz’s talk turned out to be revelatory: what he was in fact attacking was NOT the elitism of the Left per se, but rather the obfuscation of a paradox at the heart of the Left that at once presents itself as the party of the working man while also advancing policies (e.g., Gay Marriage) to which the working man cannot subscribe. This dynamic was at the heart of my study of “democratic faith,” the belief that democracy could and should be embraced NOT because the lovers of democracy embrace the “people” as they are, but only as they should be. But this criticism of Left elitism does not one a populist make.

The modern Right has built itself on the exposure of this contradiction. However, it should not be confused that a criticism of this Left elite mistrust of the people translates into a Right elite embrace of the people. Berkowitz concluded his talk with praise for the “conservative liberal” position of the Framers and the Constitution, a conservatism of limited government and balanced powers. But this very accustomed invocation of the Founders should give pause, coming as it did in the midst of a lecture that implicitly excoriated the anti-democratic antipathies of the Left elite. For the Founders were no less fearful of the populist irrationalities of the populace as the contemporary elitist Left: pressed particularly on issues of economics, most of the audience in that lecture room at AEI would doubtless regard popular efforts to curb the excesses of Wall Street with no little horror and alarm It’s worth recalling that William Jennings Bryan was hardly a friend of big business, after all, and particularly not Wall Street. Bryan populism tended to be more sympathetic to the use of State authority to curb private concentrations of power than contemporary Right embraces of populism would suggest.

The contemporary Right can trace its roots to the original American mistrust of the people, particularly seen in the frequent invocation of the wisdom of the Founders. The Framers were just as afraid of popular discontents and governance as the elites on the contemporary Left. The Federalist Papers – the official document that describes and defends the Constitutional order – is rife with condemnations of popular rule, particularly “democracy” that was pervasive in ancient settings. The Framers held the view that human irrationality came to the fore in group or crowd settings. As Madison argued in Federalist 55, “Had every Athenian been a Socrates, the Athenian assembly would still have been a mob.” That is, even if every citizen of Athens had been a reasonable and philosophic soul, the fact that they came together in a crowd would naturally lead to the overcoming of reason in favor of irrational mob mentality. The Constitutional order aims to circumvent the creation of a widespread popular will.

Representation was to elicit in the leadership by a select class of distinguished individuals. Even as the contemporary Right condemns the elitism of the progressive Left – embracing instead the Founders for their rejection of basic principles of progressivism – it was Madison who declared that a properly constituted government would give rise to leaders who would rule in a manner wiser and better than the common mass of humanity. As Madison wrote in Federalist 10, ideal representation would “refine and enlarge the public views, by passing them through the medium of a chosen body of citizens, whose wisdom may best discern the true interest of their country, and whose patriotism and love of justice will be least likely to sacrifice it to temporary or partial considerations. Under such a regulation, it may well happen that the public voice, pronounced by the representatives of the people, will be more consonant to the public good than if pronounced by the people themselves, convened for the purpose.”

A populist suspicion of the elitist orientation of the new Constitution had motivated opposition by a number of the Anti-federalists, and was largely manifested in an anti-Federalist, anti-Whig, and eventually anti-Republican opposition party (Jeffersonianism, Jacksonianism, and the populism that motivated the candidacy of William Jennings Bryan). In the 1960s, the Democratic Party – increasingly a party of establishment Washington and educated elites – threw off their traditional blue-collar (and largely Catholic) electoral base in favor of a new coalition of anti-war activists, the college-educated, and feminists. The result was a political vacuum in which the “populist” wing of the Democratic party was without representation – until Nixon developed a strategy to bring them into the Republican fold. While old habits died hard – many still continued to vote Democratic – by the time of the candidacy of Ronald Reagan, many overcame old habits and thus became “Reagan Democrats.” The transformation of Republicans as the party of the Northeast and financial elites to that of Joe the Plumber was complete.

But this accretion of populists into the Republican fold was never altogether comfortable: Republicans – the heirs of the old Federalist and Whig parties – had been, and remain, mistrustful of the unwashed masses. The masses were historically the great threat to the sanctity of PROPERTY, the very manifestation of the “diverse faculties of men” that Madison argued was in need of protection in the new Constitutional order. Republicans successfully adopted the old populist strain of American politics by turning its ire toward the pointy-headed professoriate and their dreams of a utopian political order, all the while pretending that the economic policies of Reaganism were friendly to the common man. Even as jobs were being shipped overseas under the new orthodoxy of Free Markets, Reagan cleared brush, George Herbert Walker ate pork rinds, and the Texan yahoo George Walker Bush (Andover, Yale, Harvard MBA) said “nucylar.”

Inviting the populist elements of the American electorate was – to use the Jeffersonian metaphor – a bit like having a wolf by the ears: they didn’t dare to let go, but they knew the longer they held on, the more dangerous the beast. Even now efforts are afoot to keep the incendiary potential of a populist rage in control. This, I take it, is in part the purpose of Matthew Continetti’s recent book on Sarah Palin – to “enlarge and refine” populism for the purposes of the Republican party. Thus he writes (in an excerpt published in the most recent issue of The Weekly Standard), that there is a need of a new political leader who can separate “good” populism from “bad” populism. “The left-wing populists rail against CEO compensation, bank bailouts, and lobbyist influence in government. The right-wing populists attack the auto bailouts, government spending, and Obamacare. There is no central authority directing the tea party protestors…. All of which creates an opportunity for a figure who will separate the good populism (championing free-enterprising individuals) from the bad (concocting loony theories and vilifying “enemies of the people”).” That is, populism must be purified of its hostility to economic elites and instead directed at Left political elites. The way to do this is to assume the pose of sympathetic populist and denounce at the elitism of the Left. Even as one embraces policies which encourage “too big to fail” economic entities that should be largely unsupervised by a pared down government.

There is one quite revealing datum in Continetti’s essay: “About twice as many people call themselves “conservative” as “Republican,” which means that a large chunk of potential Republican voters are alienated from the national party.” Perhaps this is another way of saying “We Won’t Be Fooled Again.” Not that Washington D.C.’s smart set won’t try. Let’s hope Kansas isn’t buying.

More: let’s hope that some cagey political leaders understand that the way to harness this populist anger is not by purging its Left or Right elements, but understanding its consistency – the anger toward private and public concentrations of power, the elimination of a dignified role for the citizen, the infantilization of the American freeman, and the looting of the Republic by power elites of all stripe, is cause for righteous and fervent anger. Inchoate and ill-directed, the Glenn Beck, “tea-party” movement reveals a justified anger toward both K Street and Wall Street. What good sense and manly indignation have put together, let no political maneuvering put asunder. It is high time for “a true and defensible populism.“