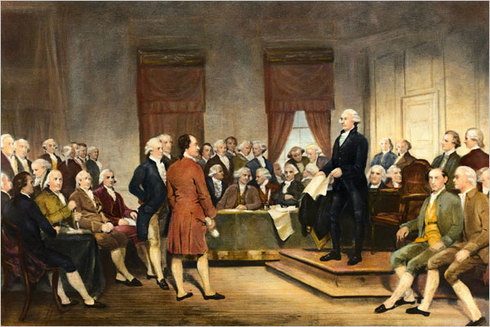 Devon, PA.  In February 2007, as the Iraq war crept to the end of its fourth year, I published this short essay, proposing a few notions on foreign policy that I had rattling in my head.  When writing it, I sometimes grew nervous, deranged by the prospect that someone might actually read this and find it in some way controversial.  As with most of what I write, it turned out that the whole world agreed with me.  Either that, or it disdained me.  I find the former hypothesis more probable.

As FPR finds its own slow creep into maturity, we have seen some readers and some editors call for concrete proposals that could be translated into practical politics.  I think this a good gauntlet and a good time to throw it, though I would also add that, while I hope FPR may play some role in influencing the tide of American culture and even its politics, I doubt very much and hope not a bit that anyone shall ever look to this journal for a political platform all its own or a party line to be “toed.”  While I hope to provide more substantial contributions more properly attentive to our present moment, as time, kids, and taverns allow, I thought this early essay might be of some interest or even some use in keeping the conversation rolling; the charitable reader–and that is the only kind who can claim to be literate–will bear in mind the date of composition and forgive the references to such antiquated figures as John Kerry.  I include the original by-line for reasons of unabated paternal pride.

Hegel observed, in his most oft quoted metaphor, that wisdom comes to us only when it is past the prime of its use.  A philosopher would think such a thing, because a philosopher constantly faces the disappointment of realizing the ideas in his head do not spring forth from it intact and vital.  The wisdom of speculation therefore seems sealed off from the life of practice, and practical wisdom may seem always to come to life too late.

The truth is more painful.  Ideas have consequences, but most of the time human beings carry out their lives cheerily numb to the best ideas and in unconscious thrall to the worst ones.  Moments of violent historical crisis, however, tend to provoke changes one would not have thought possible a few years, sometimes a few days, earlier.  Though one hopes otherwise, for instance, it is presumable that significant change to our practices of stewardship in the world will only come after some further, unmistakable natural disaster.  The First World War unleashed radical intellectual energies across the globe that manifested themselves in romantic nationalist and Marxist revolutions.  The conclusion of the Second World War, in contrast, snuffed out those energies almost entirely, so that the globe could settle into a cold hypostasis of two powerful ideologies for nearly five decades.

These are crude examples, but I think the premise holds: the routine crises of our history are the birth pangs of beautiful ideas becoming actualized and, at least as often, the birth pangs of teratomas to make the hopeful humanist shudder.

September 11th was such a crisis, where the opportunity for high inspirations to globe the full-strung sails of history presented itself.  Inevitably, much of the American response to that moment was shaped by fear, but some bold vision of the future was also held forth.  President Bush declared that the United States’ sorry legacy of manipulating weak and semi-sovereign states for benefit of its power and business interests would end.  The deaths and coups his father had either overseen or ignored while head of the CIA would cease.  America’s gift to the world would not be merely its own robust market, Bush declared; it would be the freedom that stems from democracy.

Half a decade later, we find ourselves mired in Iraq, the promise of a democratic Middle East occasionally – only occasionally – still dangled before us as an excuse for an invasion completed and justification for an occupation prolonged.  If one watches Fox News, one hears that serious reflection on how we got to this moment should wait until the mission is accomplished.  If one listens to the most prominent Democratic voices in Congress, one learns that, however unfortunate the war, slow and small steps must be taken to achieve some kind of victory.  Right and Left alike appear mired not only in Iraq but in a kind of thinking that cannot move beyond the framework of realpolitik.

I sympathize with both these positions.  One must appreciate how attuned to the media are many of the insurgents in Iraq, and how devastating it can be to question one’s country’s sense of integrity and rectitude at home when they are threatened abroad.  And one must commend the gradualism of the political process to the extent that it arises from prudent policy rather than prurient party interest.  But to allow this moment of crisis – this intractable conflict in Iraq – to pass without the voicing of some few bold ideas would be a great opportunity missed, an instance of cowardice rather than prudence.

First, and above all, let us drop the charade of spreading democracy in the Middle East or around the globe.  Democracy is not America’s gift to the world.  Baseball is, followed closely by the poetry of T.S. Eliot.  Political institutions in themselves are relative and malleable, intended to fit the contingent historical conditions of a community in its efforts, first, to nurture and fulfill man’s political nature while also sustaining and promoting the common good – which are the two absolute and transhistorical poles to which all practical politics are ordered.  We cannot lend others the institutional forms necessary to attain their own common good unless we can also offer them our particular history—and this is to confuse peace between peoples with the replacement of one by the other.  More importantly, we ought not to pretend that the lending of those forms – a few scraps of procedural democracy – in itself constitutes bequeathing either a just or tolerable society.  Russell Kirk once observed that to “expect that all the world should, and must, adopt the peculiar political institutions of the United States—which often do not work very well even at home—is to indulge the most unrealistic of visions.”  I would go further and call it a perverse vision: a sickly confusion of government with politics, positive laws with a people’s history, and technocratic rationality with the foundations of community.

Second, as President Bush has acknowledged, our past is filled with educational chapters in the use of foreign policy for bloodily acquisitive ends.  This is something neither recent Democrats nor Republicans have shown much imagination in changing.  The chief difference between this second Bush administration and the Kerry administration that was not to be is that the former is unapologetic about using military power in support of American corporate interests.  What was the latter going to offer the world?  A shrugging, squeamish confession that “this will hurt me more than it hurts you,” as he orders another surge of troops into the latest foreign entanglement?  A slight redistribution of defense spending to infuse democratic movements within regimes we do not like?

Aside from ceasing to manipulate foreign regimes by clandestine and public coercion, we might reluctantly concede that America and the rest of the world would all be better off if we learned to shift for ourselves.  The difficulties of economic autarky seem lest costly than those of an ever-expanding appetite for foreign products and mined and drilled resources.  And, of course, autarky need not be confused with isolationism.  The nicest thing about going abroad is coming home again to stay.

These are intended as bold ideas suggested rather than easy solutions commanded; and so, third, we might consider how appalling it is that the U.S. military has permanent bases located across the globe.  I understand the strategic practicality of those bases.  What I do not understand is how we can accept them as a permanent feature of our foreign policy.  If we believe in our state sovereignty as a virtue, we should station our troops at home to guarantee the integrity of our borders.  If we believe in the sovereignty of other states as a virtue as well, we should do what is necessary to admire it from afar.

This proposal would indeed be a hard sell.  Almost from its founding, the federal leadership of the United States has imagined a new form of empire – one that avoids the permanent problems of colonization that eventually undid the British Empire.  The domination of capital, the threat of sudden, unpredictable military might, and the promise of an exit strategy make possible an empire without conquest, the fruits of victory without the planting of flags.  It allows, moreover, Americans at home to believe that their daily lives—the products they import, the gas they burn, the debt they accumulate or allow their government to accumulate almost beyond measure—do not implicate them in what begins to look like state terror abroad.  We can play at our national fantasy of being “rugged individualists” without musing at the speedy checkout that it is for us the world bleeds.

Presuming these three proposals were followed, we might also suggest that, fourth, satisfied with its own national borders the federal government might also give state lines some integrity once more by returning the United States to its birthright of federalism—or, better yet, anti-federalism.  And, fifth, as a bizarre technological fulfillment of the American tradition of valuing life and liberty, we might prudently match the advances in our missile defense systems with the destruction of our stockpiles of nuclear weapons.

These propositions will no doubt frighten some with their extremity and others with their provincialism.  My own conviction remains, however, that the paradox of America’s present crisis is that the path of cowardice and authoritarianism lies in continuing military adventures abroad and that of courage and charity lies in a turning inward, a return home, an acceptance of the bounty Providence has given.

James Matthew Wilson is a Sorin Research Fellow.  He proudly admits that the only revolution in which he is truly interested is that of his daughter, Livia, who rolled over for the first time while he was writing this column.