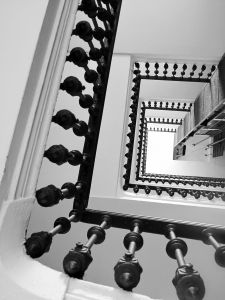 County Kildare, Ireland. A couple I know – we’ll call them Bob and Nancy — lived in a century-old house in the middle of their town, a few miles from their jobs and surrounded by long-time neighbours. When the last of their children left home, they announced it was time they looked for a bigger house.

“Do you mean a smaller house?” I asked.

“No,” they said, surprised. “We mean a bigger house.” They had some extra money now that they were not raising children, and they wanted to invest it for retirement.

Their later years, however, did not turn out as relaxing as they had hoped. Both husband and wife had to work full-time to pay for their massive new house, and their few free hours were spent on the monumental task of cleaning and maintaining it. They gave their old house to their son and his wife, who worked all day to pay for that house’s mortgage and maintenance. The son’s child – my friend’s grandson — was put into day care while parents and grandparents worked long hours. Reading between the lines, I gathered that they ate on the run, often felt ill and depressed, and rarely saw their families.

It was not my business how they lived, and maybe there was more to the story – leaky roof, neighbourhood conflict, who knows. As far as I could tell, though, they had neatly divided an obvious solution into several costly problems.

If they had stayed in their old home with their son, they could have all pitched in to maintain and pay for it. No one would be under as much pressure to spend their lives at work, leaving time to live the life they wanted. If someone lost their job in this depression, others could fill the gap. A crash in housing values wouldn’t have mattered much if everyone was free from financial pressure and no one was going anywhere.

With more time available and less pressure, some people in the house could have spent time growing their own food or preserving it – crafts that most families once practiced together, and whose instruction was passed down through the generations, and which would make them even less vulnerable to a financial crisis. The family could raise or even home-school the grandchild, rather than pay exorbitant sums to see him raised by strangers.

I talk often with elderly relatives and neighbours from Missouri, Germany and Ireland. They all grew up in different worlds; a farm, an urban tenement, or the ruins of a bombed city. Ask them what has changed, though, and the answer is always the same: the ubiquitous presence of family and community.

Almost all these elders grew up with grandparents and relatives in the home or nearby, as most people did until the mid-20th century. Harvesting the garden, drying or pickling food for the winter, fixing the property, praying in church – all these were done as a unit, with children mimicking the adults. Even in urban families where most people worked, at least one relative usually stayed home to cook meals and keep house, and families ate together, sang or played cards together, shared beds or rooms.

The web of connections extended beyond the family – neighbours knew each other as a matter of course, on many levels. It sounds similar to the way people know each other in the Irish countryside where we live: the person in front of you in the Sunday pew might also be a business client, and might also trade their extra eggs for your vegetables, and might also coach the local boys’ football team. Relationships can be tense or self-serving, but they run deep, and they temper people’s reactions in a conflict.

Most elders say they found work through cousins or grandparents, and their jobs as builders or farmers or clerks were spent amid many others doing the same thing, rather than sitting in adjacent cubicles, receiving identical spam about teamwork. They may have made a fraction of the money as America’s desperately poor today, but did not feel poverty in the same way, for their lives were not spent drifting through a sea of strangers.

Such a life would be as healthy now: consider the stereotypes of various ages, and how neatly the often-maddening qualities of each age are meant to complement each other. Children bombard adults with questions about the world – who we are, where we came from, how things work. Many young adults are hungry for experience and advancement in life. New parents often feel bewildered by the task of raising children, and young mothers left at home often feel lonely and isolated. Elderly people often want company and a chance to pass on their memories. Passion and restraint, questions and answers, energy and experience – they are like jigsaw pieces waiting to be assembled.

Inside the cheap energy window of the last few decades, however, family members were expected to live in isolation, first as a “nuclear family” and then as individual consumers. More and more households saw both parents go to work, more children were warehoused in day cares and schools, more people struggled to pay for escalating mortgages and day care expenses.

Of course, many people then as now were undereducated, and some may have found their close horizons stifling – we are lucky today to live in an era where we can travel so freely and instantly contact others around the world. But the depth of real-world community should not preclude the breadth of online learning, but balance and ground it. No amount of Twittering can build a relationship with the old lady down the road, and no amount of online eco-activism can substitute for physically pollarding one’s own trees.

Moreover, everyone’s situation is different. Maybe you live far away from any family. Maybe you struggle to tolerate each other even for short reunions, and maybe there are good reasons for that. Not everyone can pick up and move, and certainly senile or mentally handicapped relatives might require care beyond most of our abilities.

Moving in together also creates its own drama, especially for the unaccustomed. I know from our experience, living in a home with a grandparent, that everyone has different standards of cleanliness, different philosophies of child-rearing and cooking, and that everyone needs their own space sometimes. All these things happen in the single dimension of marriage, and each new presence under one roof multiplies the potential exponentially.

But enough lines can also make a safety net, as more hands mean more division of labour, more likelihood that there will be an experienced cook or gardener in the family, a high-income breadwinner, someone with a car or a needed skill, someone who can tell stories or play music at the end of the day.

More of us will find ourselves doing this, for several reasons. More unemployment means more people who need help paying the mortgage or the rent. Foreclosures have already forced many people to migrate, and loved ones are generally preferable to a shantytown behind the Taco Bell parking lot. Less energy will mean less unnecessary transportation, and a changing climate – wildfires in the west, Mississippi floods, Dixie hurricanes – will make more migration necessary. Smaller families and aging Baby Boomers mean more elderly relatives who might prefer to live with family rather than ailing inhabitants of a nursing home.

An emergency, though, is the worst possible occasion to throw people unexpectedly under the same roof. Tragedies are difficult enough when the rest of life remains constant, and can be intolerable when one’s comforts and privacy are torn away. We are better off easing into the experience – growing accustomed to the new grocery lists, the new sleeping arrangements and schedules, the new boundaries of modesty and conversation. We would all be better off preparing for roommates now, shedding our embarrassment at moving in with our parents or children, and adapting at a speed that is comfortable for everyone.

This is likely to be the new face of our future: a hundred million small and simple changes to reduce our debt and isolation, to cope with less money and weird weather, to consolidate our possessions and needs. We might have to shed our load of rootless consumerism, but we might also rediscover what it means to be part of something. For some people, who have spent their lives searching for connection and meaning, it will be like coming home for the first time.

Brian Kaller is a former newspaper editor from Missouri and now lives in rural Ireland with his family. He continues to write freelance articles, published in the American Conservative, his local newspaper, and his blog, http://www.restoringmayberry.blogspot.com.