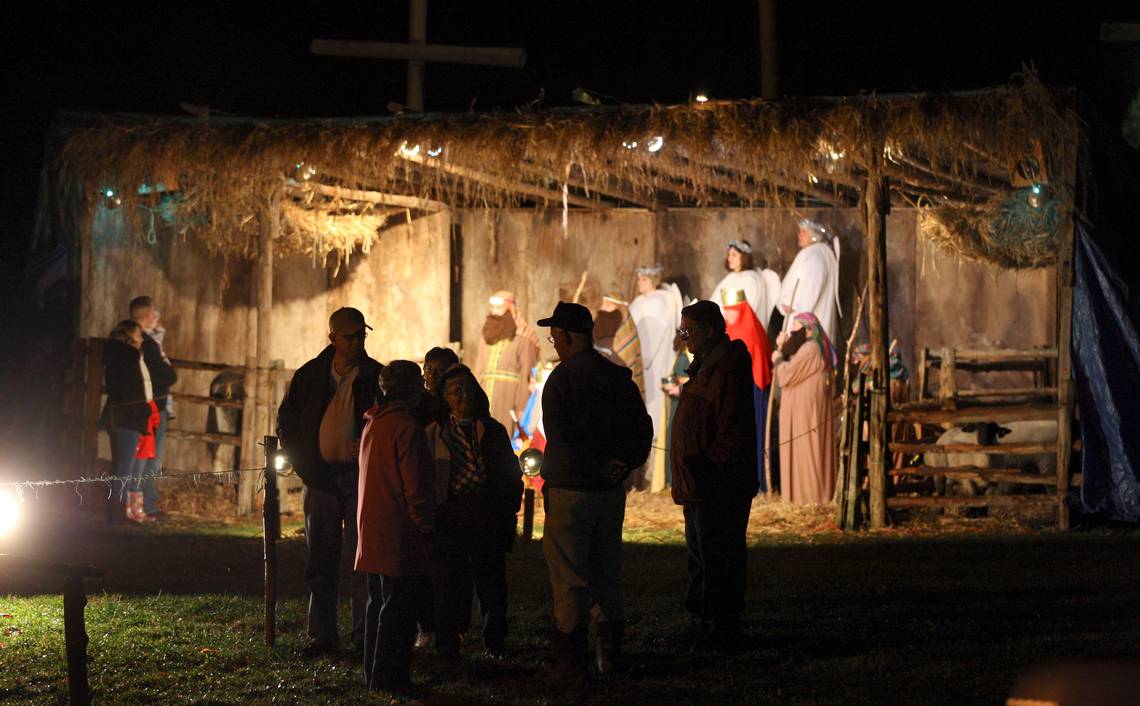 Henry County, Kentucky. Most families who celebrate Christmas have their own favorite Christmas traditions. We like to go to Bethlehem.

Bethlehem (Kentucky, six miles from us) is a place too small to have a postmaster anymore, but the Postal Service signs up a temporary one during December, when people come from miles away to have their Christmas cards canceled there.  I am neither that sentimental nor that organized–it’s a very good year when I get cards out–but one night during Christmas week we do drive over to see the outdoor living nativity the town stages annually.

Lit by strong work lights, their shed contains the familiar manger scene, no doubt much like a thousand others in a thousand other places.  Bethlehem is a very small town, but for 51 years now the three organizing churches have managed to field multiple casts, who stand there for an hour at a time in what is often the first bitter cold of the year, silent themselves and still while the piped-in contemporary Christmas carols play through some speakers on the ground.  The animals are generally a donkey and a few sheep, penned to the side, placidly on loan.  Given the hour and the temperature, however, the baby Jesus is a doll.

There is much concession to the weather and some attention but no obsession with period detail.  Those shepherds who wear glasses by day wear glasses around the manger too, and I have seen coveralls peeking out from beneath more than one wise man’s robe.  I have even seen the Heavenly Host chewing gum.  It doesn’t matter.  Their stillness and their own quiet behind the emotive carols is always moving.  They are not caught up in the rush and stage make-up of a Broadway-style show that costs hundreds of thousands of dollars, which is what the megachurch in Louisville has spent in years past on its Easter pageant (canceled this year due to the economy).  These are just people who came from work to stand out in the cold in a burlap robe for free, giving of their time and silence during a season when there is very little of either.  While there may possibly be a little friendly arm-twisting to fill the shepherd’s section, there are no budgetary woes for this performance, because there’s hardly any budget.  No budget to get in the way.

Theirs is a Christmas gift to the county of the sort your mother always wanted from you: a gift of time and effort, not money.  And perhaps for that very reason, it is surprisingly easy to see–spotlit in the dark–some visual echo of that long-ago birth in the pageant these neighbors of mine portray.  I am always astonished I feel this way, but I always do.  The lack of emphasis on bang and polish makes it more and not less evocative.  Usually I can see in a young Mary’s face the honor she feels for the part she has been given.  And one year as we drove home my youngest said she was sure that night the Baby was real.

Most of us are convinced and buttressed in our faith by the testament of other people, and mine is a religion of the Word and of the Book.  But in a modern world awash in blather, some strong arguments are silent ones.  So once a year we go to Bethlehem, and hear.