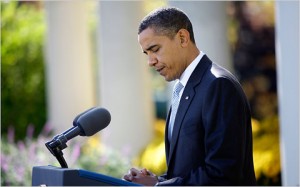 Erie, PA. Presidential speeches are evaluated in two basic areas, style/delivery and substance. President Obama’s Afghanistan speech was well delivered. The president appeared serious, determined, candid, and was articulate. Coming on the heels of a president who was often awkward and fumbling in his speeches, Obama’s rhetorical skill is a welcome change. Yet style is no substitute for substance. Superficially considered, the president’s address was excellent. On substantive grounds, where the stuff of politics is made, the speech was odd. There was something incongruous about the style and substance of the speech.

It may be that the president is learning that politics is the art of the possible and that governing and political campaigning require different skills, visions, and tactics. That Obama was more idealistic during last year’s campaign is no surprise. That he has struggled to strike the same tone in raising expectations regarding the possibilities of politics is also no surprise. The healthcare debate has surely frustrated the president as has the economy, Iraq, and Afghanistan. The campaign rhetoric about changing the world and changing everything is rubbing up against the realities of typical political life.

During the campaign, Senator Obama needed to bolster his foreign policy credentials. As a campaign strategy, he had to find a way to distinguish himself from Senator McCain and at the same time, avoid appearing soft on terrorism and unprepared to be commander-in-chief. Candidate Obama chose Afghanistan as the dividing line between the Bush/McCain Republicans and his approach to American foreign policy. The strategy made sense in the context of the campaign but as the president’s speech on Afghanistan indicates, it does not translate well into effective foreign policy. Iraq was the undoing of the Bush presidency and the Republican Party. It made no political or policy sense for Obama to support a continued war in Iraq. McCain was stuck politically with Iraq. He could not easily abandon a policy he had been supporting in the Senate for years. Like a boxer who has studied his opponent’s weaknesses and tendencies, Obama saw an opportunity to both tie McCain to the unpopular Bush and to the unpopular war in Iraq while creating an alternative vision of foreign policy that shifted the focus from Iraq to Afghanistan which, after all, was the breeding ground for the September 11 attacks against the U.S. Obama committed himself then, but not in his recent speech, to capturing Osama bin Laden. He appeared to refocus American foreign policy on the real battleground of terrorism and play a strong hand in an area of the campaign considered his greatest weakness. As campaign strategy, it was an astute maneuver.

There was, of course, a risk to the strategy. If Obama committed himself to shifting the war on terror to Afghanistan, he could not easily retract his position once in office. However it was done, troops would have to leave Iraq and more troops would have to be sent to Afghanistan. The president would have to do something in this vein to match his campaign rhetoric. He struggled for almost a year to figure out what that something was, and in his speech to West Point Cadets he outlined his long-awaited Afghanistan policy. In the speech, the president argued that for Americans, the Afghanistan-Pakistani border region “has become the most dangerous place in the world” and that “the safety of people around the world is at stake.” Consequently, because American security and interests are at stake, the president is sending thousands of additional troops to Afghanistan. The troop increases and mission represent a surge with a timeline that has as its objective American withdraw from Afghanistan by 2011.

If the president’s assumptions about the importance of the region are correct, it seems incongruous to attach a timeline to the war. Yet, if viewed from the perspective of Obama’s campaign strategy and his first State of the Union Address, the policy makes more sense. In his 2009 State of the Union Address, the president created a long list of ambitious policy objectives that included ending the Iraq War, fixing the economy, reforming the healthcare system, cleaning up the environment, fixing social security, rebuilding American infrastructure, creating new energy policy, reforming American schools, and accelerating the war in Afghanistan. All of these objectives and more would be done while reducing the federal budget deficit. Wanting to keep to his campaign promise and understanding the political need to establish himself as a competent commander-in-chief, the president created an Afghanistan policy that will not infringe on the rest of his ambitious policy agenda.

Readers of the Front Porch Republic Magazine are likely to recognize the immodesty in the president’s agenda and the danger of a brand of democracy that too often leads to populist campaign strategy determining actual governing policies. Candidate Obama would have had a tough time arguing that both wars in Iraq and Afghanistan need to end. He needed Afghanistan to convince voters that he was up to the job of leading the strongest military in the world. Now that he is in office he feels compelled to honor his commitment to a policy that he supports halfheartedly. His tepid commitment to Afghanistan will, however, bring him to a place he likely wanted to be during the campaign but could not go for fear it would cost him the election: opposition to both wars.

The president is far more sober about Afghanistan than healthcare. He is willing to spend tremendous political capital to change a healthcare system that provides the best healthcare in the world. He is far less willing to change the part of the world that he considers the most dangerous to Americans. I would like to think that the president’s attitude toward Afghanistan represents a maturity that comes with governing and that will carry over to other areas of presidential politics. My fear is that it is the product of a campaign strategy that helped him to win an election but will lead to disaster in Afghanistan. There are many reasons to question the increasingly populist flavor of American politics. The president’s foreign policy in Afghanistan can now be counted among them.