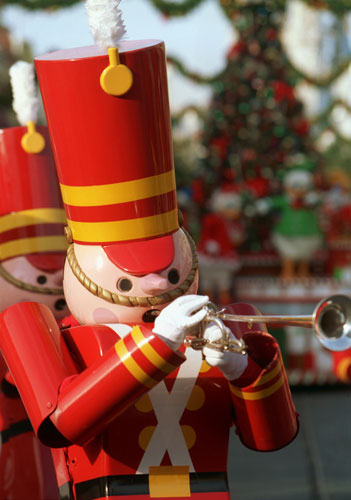 Jacksonville, AL.    During his December 20, 2006, news conference, President Bush told the nation, “As we work with Congress in the coming year to chart a new course in Iraq and strengthen our military to meet the challenges of the 21st century, we must also work together to achieve important goals for the American people here at home.  This work begins with keeping our economy growing. . . . The recent report on retail sales shows a strong beginning to the holiday shopping season across the country.  And I encourage you all to go shopping more.”

At the beginning of this year’s Christmas season, President Obama announced his second escalation of the war in Afghanistan—an additional 30,000 troops for the unwinnable imperial bloodletting.  Echoing Bush, Obama did not neglect the dogma of economic growth: “But as we end the war in Iraq and transition to Afghan responsibility, we must rebuild our strength here at home. Our prosperity provides a foundation for our power. It pays for our military.”

These two examples represent the twin obsessions of the American elite: materialism and militarism.  The golden calf and the gatling gun.  One might think that Christmas, of all times, ought to be about something else, but one is going against conventional wisdom in 21st -century America to hold that notion.  In light of the New Testament, this should not come as a surprise.  There has always been a large countercultural element to genuine Christianity.  That is the whole point of “Love not the world” (I John 2:15-17; cf. James 4:4-5).  The Church is the assembly of called-out ones—called out of the world.  Spiritually, not physically.

Of course, you do not have to be a Bible-believing Christian to care about humanity and peace.  Scores of libertarians and social-justice liberals share these concerns.  But the theologically orthodox Christian should have an even deeper commitment to such values.  Christians want their children to grow up to be socially well-adjusted.  We want them to be able to easily communicate with and empathize with their neighbors and workplace colleagues.  We want the light of Christ which shines within to be seen by those around them.  We don’t want the shining to be hindered by a reputation for being “strange.”  Having said all that, we also want our children to be citizens of Heaven and to not love the World.  While we want them to fit in with society in some ways, we don’t want them to lose the distinctive values of the Kingdom of God.

It is a challenge to raise children so that they will be perceived as “normal” by their peers while simultaneously being faithful to the teachings of Christ and responsive to the guidance of the Spirit.  This is a challenge of interest and concern not only to parents of young children, but to all believers.

Obviously many factors play a role in shaping the development of thought and action in children.  The Christmas season provides us with a seemingly small but actually important factor to consider in this development: Christmas presents.  The gifts we give to children may not say much in and of themselves, but they often reflect something larger than themselves.  Without either giver or receiver being aware, gifts often symbolize competing value systems.  Two manifestations of an ungodly value system are greed and violence.

The slogan “Let’s put Christ back into Christmas” refers at least partly to the commercialization of Jesus’ birth.  Commercialization is one component of materialism.  It is the crass buying and selling of serious thoughts, deep feelings, and momentous actions . . . up to and including the birth of Immanuel.  Materialism is often associated with societies characterized by Marxist economics and atheistic religion, but it is also rampant within capitalistic and theistic societies.  It is the value which says, “Everything has a price.”  It is the value that leads us to believe that success is measured in terms of money and possessions.

The Bible contains many references to God’s special concern for the poor and weak, and many warnings directed toward the wealthy and self-satisfied.  People cannot truly serve both God and Mammon.  The parable of the bigger barns shows that a person’s life does not consist in the abundance of possessions.  The message to the Laodicean church serves as a warning that a combination of material prosperity and spiritual poverty can exist even among professing Christians.

Christmas is big business in America.  Spiritual truths are easily lost sight of amidst the whirlwind of shopping, charging, and wrapping.  The eternal significance often gives way to temporal concerns centered on the transfer of currency and goods.  The spirituality, simple family traditions, and emphasis on community which characterized the Christmas season in times marked by less affluence and less mass advertising have been displaced in recent decades.  We are urged to spend freely—even if it results in living far beyond our means.

The period between late November and late December has become a pillar of the nation’s economy and a haven for individual cries of “Gimme!”  Those wishing to move away from a Christmas tainted by materialism can place limits on holiday spending, encourage the exchange of homemade presents, and displace worldly values with heavenly values.  Many of the requests for possessions come from children shamelessly manipulated through television and movies.  Unfortunately, even the popular Disney and DreamWorks films are examples of this.  Fortunately, there are alternatives to the commercialism and artifice promoted by the big entertainment corporations.

Instead of exposing children to plastic nature, we can give presents which emphasize God’s role as the creator of the Earth—including all of its wondrous animals, plants, and elements.  Respect for creation and love for the Creator can be instilled at an early age by sharing stories and gifts about Noah and the ark and about the beasts which presumably surrounded the manger on the night of our Savior’s birth.

Instead of introducing children to plastic history, we can teach them about Christians who have played significant roles in American history and who can, in some ways, serve as models for us today.  There are many examples, including William Penn, Patrick Henry, Angelina Grimké, and Fannie Lou Hamer.  In the divisive 1860s, we can point to Wendell Phillips and Robert E. Lee, if we can accept gentlemen as diverse as a  Massachusetts abolitionist and a Virginia general, respectively.  Rather than vulgar and insipid characters like SpongeBob SquarePants and Dora the Explorer—little more than advertising props, really—it could be more interesting and inspiring to share with children the exploits of Jonathan Edwards and Dorothy Day.

Many of us complain that television and movies are too violent.   Graphic and gratuitous violence in the world of entertainment not only reflects but seems to contribute to real-life violence in our society.  Many of the nation’s cities are wracked by crime and gangs, but it is not just an urban problem.  A casual disregard for life extends into the smallest towns and most remote farms.  Desensitization to cruelty and bloodshed abounds.

According to Jesus, peacemakers shall be called children of God, people who live by the sword shall die by the sword, we should turn the other cheek, and we should love our enemies.  These are “hard sayings,” but they are also true sayings.  Paul reminds us that we are contending against evil spiritual beings, not against fellow human beings.

During my childhood, I received many toy soldiers and guns as Christmas presents.  I had lots of fun playing with them.  My acceptance and use of items of pretend violence did not cause any readily-noticed harm in my life.  The potential effects of war toys should not be exaggerated, but neither should they be minimized.  The harm that may have been done in my life is not easy to see because our culture glorifies war and sanctions violence . . . despite New Testament teachings to the contrary.  When I unthinkingly used mock instruments of death in the course of my play, I was being true to my culture, not to my faith.  A century ago, the Christian statesman William Jennings Bryan pointed out that it is a “little strange that the birthday of the Prince of Peace should be celebrated by the presentation of toys illustrating mimic warfare.”

Alternatives to war toys and violent action figures include presents which promote the fruit of the Spirit—love, joy, peace, patience, kindness, goodness, faithfulness, gentleness, and self-control.  Peace is an important component of both advents of Christ.  During the first coming, the angels announced peace on Earth among people with whom God was pleased.  The second coming includes the promise of universal peace after the reign of evil has been overthrown.  Children should be taught to look forward to the peaceable kingdom which will exist during the millennial reign of Christ on Earth.  Natural desires for aggression, courage, and glory should be channeled into the desirable goals of standing against the wiles of the Devil and doing battle with invisible principalities and powers.

Thinking about Christmas presents in these terms may strike the reader as pretty exotic.  That’s just the point.  As Christians, we have too often accepted worldly values in lieu of heavenly values and the customs of culture in lieu of the customs of faith.  Thinking about holiday gift-giving is an example of trying to follow Paul’s admonition about not being conformed to this world, but rather being transformed by the renewal of our minds.

It is important to question the assumptions of the culture in which we live.  We were not born into a godly realm.  We were born into enemy-occupied territory.  It is not surprising that the world in which we find ourselves is organized on the basis of force, greed, selfishness, and other satanic principles.

Christians should recognize evil principles for what they are and be guided by the alternative principles exemplified by our Lord.  The anniversary of his incarnation presents a wonderful opportunity not only to act upon the heavenly principles of peace, sharing, and selflessness, but also to pass them onto our children in the form of Christmas presents.

Postscript: I want to thank fellow Social Justice Committee members of the Mid-Mo Greens for inspiring the writing of this piece: Susan Lloyd, Mary Beth Schillinger, and Shirley Taylor.