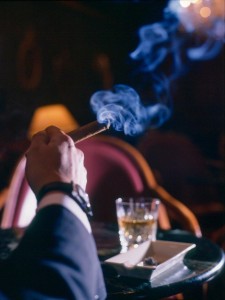 JEFFERSON COUNTY, KANSAS.  Something is not right on The Porch.  But on my porch, things are just dandy, so smoke ’em if you got ’em boys!

Puff puff puff and if the lung ‘C’ gets ya, tell St. Peter he’ll just have ta wait while you smoke smoke smoke that cigarette.

On the other hand, Rod Dreher says: “I Love Smoking Bans.”

And in the comments, Russell Arben Fox says he can’t wait until the new prohibitionists get around to the old prohibition and ban the demon rum again!

I feel it’s my moral duty to step up and put the brakes on this new prohibitionary impulse gaining ground on a certain corner of The Porch.  I’ve seen the raw milk prohibitionists and the anti-smoke prohibitionists chum right up to one another in the lobby of our State Capital, sweaty and shiney-cheeked with neopuritanical zeal and burbling over with thrilling explanations of new legislation being introduced to make sure no one is doing anything without a bend of the knee and a doff of the brow to the State with a ‘Mother-may-I’ first!

By the way, that photo above of me enjoying a fine backwoods roll was taken in my office — the office of the chief law enforcement official of Jeff Co., KS. — at least one redoubt of American chutzpah amid the genuflecting hordes.  Puff on that neoprohibitionists!

The old timers at the court house talk about the great trials that have passed into legend, and they all are given ambience by the cigar chomping defense counsel and cigarette ash trays on the juror’s chairs.

One crafty old war horse used to stick a paperclip deep into his cigar.  During the Prosecutor’s most compelling evidence, he’d let the stogey burn down over the edge of the ash tray until the ash grew to an inch, and two-inches, thus diverting the jury to rapt attention on his cigar and wondering just when that ash would drop!

I also blame air conditioning.  When was the last time you were in a public place with the windows open?  Inhumane!  No wonder people want to ban smoking.  I’ll tell you what, how about we ban air conditioning!  I can get down with that.

The old timers remember when no trial or legal wrangling would go past 1pm because it was too damn hot!  The judge and parties would retire to tobacco, beers and steak at the bar and when they emerged the case was settled.  Case loads were kept in check by mother nature.  Who can be litigious when it’s 100degrees in the shade?  Now there’s some natural limits we ought to appreciate.  On the other hand, people tend to bicker endlessly when they live in bubbles.

Justice and joy both suffer from our shut-up sterilized prettified dehumanized biosphere environments of managed and complete control.

Raise ’em high boys, let’s blow the lid off (and the windows open)!

Who has a light?