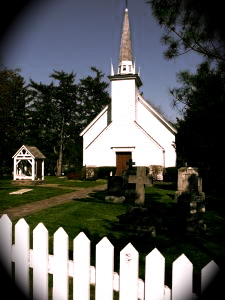 Hillsdale, MI. Most of us learn about friendship from our families, just as we learn about everything else worth knowing from our families.  Mine is an old New England family, farmers and preachers and doctors and lawyers, and tradesmen, not many in commerce.  Nobody up to my generation was ever rich, nobody particularly poor, so there was comparatively little arrogance and comparatively little envy.

New Englanders were historically family-loyal, but not clan-loyal.  Harriet Beecher Stowe thought that of all the English ideas her ancestors brought with them, that not even democracy was able to “obliterate, was that of family.  Family feeling, family pride, family hope and fear and desire” were what made New England.  My Grandmothers Willson and Fuller, two ladies who could not be more unlike each other, both said, often–no debate–”family first.”

Traditional New Englanders were “town-born” and thus attentive to their neighborhoods and local associations, and more often than not rather interested in the affairs of the comity.  This made them good neighbors but not always good friends.  They might have to stand up in the Congregation and accuse the person next door of some breach of individual or community morality, which called for a certain reserve.  As the half-savage neighbor in Robert Frost’s “Mending Wall” says, “Good fences make good neighbors.”

I have none of the tenderer-than-thou

With which the modern world is being swept.

Until well into the 20th century even Massachusetts (certainly the rest of New England) would have been a red state, and a large part of that would have been due to the need to be neither “too far out nor too far in.”  Frost wrote in “Build Soil,” “Don’t join too many gangs.”

The story of Jonathan and David was never very popular in traditional New England, even as attached to the Bible as those hardy folks were.  They preferred the dutiful reserve they found in Joseph (that is Mary’s Joseph); there has been a Joseph in my family every generation since 1634.  Mrs. Stowe often said that the underlying foundation of New England life was a “profound, unutterable, and therefore unuttered, melancholy, which regarded human existence itself as a ghastly risk,” which is not an attitude conducive to forming loving friendships outside the family, nor to being sentimental about larger collectives.

My father (the last of the old time country doctors) and mother were loving and open and without guile, but had few friends.  Willsons are a friendly bunch, but neither I, nor my brothers, nor my sister have had many friends.  This Yankee trait still gets transmitted long after the culture (and the cult) that nurtured it has withered.  Sometimes I admire the rituals of friendship that certain Southerners cultivate (they, after all, invented fraternities); more often, not.  Grandma(s) said, “family first.”