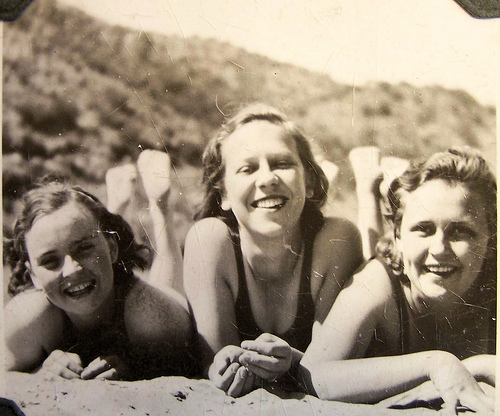 Henry County, Kentucky. “I will never run out of love for you,” your mother may have told you once, if she were the expressive sort and you were not an exhausting child.  It might even be true, mother love being proverbially expansive, and the gold standard for affection generally.

But while mothers can show a great capacity for love for the highly specified individual, only a few individuals will enjoy all that capacity.  And what is true for mothers and children is twice as true for the rest of us.  However much we would wish our hearts to hold, we are creatures living in time, that frustrating fourth dimension, and hence creatures of limits.  Time itself may march on forever, but we won’t.  Yet any close relationship is as demanding of time as a garden—a big garden.  We have to find the hours for it.

Like so many commercial ventures, Facebook trades in a degraded language.  None of us is ever going to be befriended by hundreds or thousands, as we all know perfectly well.  The more gregarious among us may have that many acquaintances among our colleagues and former classmates, but the words “acquaintance” and “friend” exist to distinguish between an occasional and easy-going tie and a much stronger one, and if we weren’t such a gollum-golly friendly nation, all of us being on a first-name basis from Hillary right down to Team Member Mitch at the big box store, well, we wouldn’t let Facebook get away with its snake oil rhetoric.  As it is, we sometimes succumb to it.  There are days, aren’t there, for all you Facebook users, when you feel some envy that your little sister has two hundred more “friends” than you do?

Well, let us snap our cellphones shut and use the word correctly: even so, there are friends and there are friends.  The first sort includes those people we enjoy seeing maybe often, maybe not, learn something from, swap stories with, leave the children with, borrow books from, or work with compatibly.  We reach out to them (and they to us) feeling various degrees of affection and need.  Most of us require an extended social network to keep us mentally and morally awake, and for a laugh, too, and if these friends are people we can weave in and out of our lives without heartbreak, they are nonetheless dear.  They respond, they amuse, and they sometimes shelter us in a way that shows as clear as paint that the world is full of goodness and not just evil.  Nor do they generally require an enormous amount of time.  A man who cannot keep friendships like these in good repair isn’t trying.

But the friends who are our best and closest friends are another matter entirely.  They are rare, and irreplaceable, and to those of us temperamentally inclined to look at things a certain way, they seem to be one of the many excesses of a Creation that is so overflowing with good things that there is a great deal of undeserved extra.  We have our families, who are stuck with us; how fortunate we are also to have our intimate friends, who are not.

Finding friends like these seems to be a matter of grace or luck, though keeping them requires time and effort, tact and finally love.  Beyond fourth grade there is no instant best-friending; real friendship needs a patina.  It has to be proven in order to be.  It needs presence, too; communion is too subtle a matter to establish itself well long-distance.  You can maintain friendships across the country, but you can’t really grow them; not without visits in between.  (At least I can’t.  The one exception I’d make is for letters, since a written letter can be almost as expressive as a face.)  It’s very hard to be there for someone long-distance, either; in times of crisis there is no substitution for the laying on of hands.  Outside of the necessity of your kids knowing their grandparents, keeping an old friend at hand is the strongest argument I know for everybody to stop moving already.

If you are fortunate, the two of you have had years of laughing at the same absurdities, and relaxing in the comfort of being with a similar cast of mind, before one of you gets walloped upside the head by life and needs close attention for a while, with all the energy flowing in one direction.  For even in good times, people need a great deal of tending.  Without it we are in danger of becoming inhuman and inhumane, since the Old Adam and Eve in us is always breaking out.  None of us is ever finished–not in this world–and we’re not static, either.  If we are not becoming better people, we are becoming worse.  If we are not less selfish, then we are more, and if our nose is coming into ever-clearer focus, then the wide world beyond is blurrier.  Heaven forbid our dearest friends should fail to point out this fact, bluntly or diplomatically as times and circumstances require.  And Heaven forbid that when we are knocked out of the boat entirely, someone shouldn’t reach out an arm, grab us by the collar, and haul us back over the gunwale.  A good swimmer can often save herself from drowning, but it is a Godsend to have some help.

Being Wasps (some of us) or men (many of us) or otherwise restrained or inarticulate folk we may or may not ever explicitly acknowledge the assistance, but it is still true, and a truism because true, that half of life and much of friendship is being Johnny-on-the-spot.  What else can we do for our old friends when they hit a rock, as we all do eventually?  For friends whose spouses have left, whose careers have exploded or whose parents or children are severely ill?  We do not normally possess the magic to reglue what comes apart in this world.  All we can do is show up, and show our friends that they do not grieve and suffer alone.

And another day–perhaps even that very day, because black humor can be found everywhere, at the bottom of every pit–we will once again find something to laugh at.  And if that laughter is close to tears, there is still joy in it:  the joy of knowing and being known.