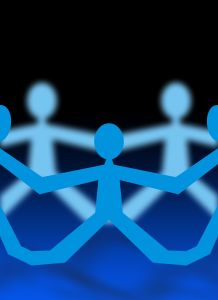 In their own interactions, the characters on “How I Met Your Mother” tend to meet that standard of friendship, and then some. Friendship drives the show’s humor and plotlines, and friendship makes the show appealing as a whole. None of the individual characters are entirely likeable, but their love for each other is. They all try, very hard, to be very good friends.

Maybe that’s why no one on “How I Met Your Mother,” although they are young people living in New York City who in real life would certainly spend a lot of time on the Internet, has ever talked about Facebook.

According to official data, the average Facebook user has 130 friends on the site. And lots of us – as of this morning, I have 716 Facebook friends – have many more than that. Some of my students are well above the 1,000-friend mark.

That’s a lot of mediocre plays to attend. Hell, that’s a lot of birthdays to remember, a lot of holiday cards to send, a lot of drunken phone calls to take late at night.

Of course, we all know that Facebook “friendship” does not connote real friendship. It does not confer any of the obligations we might associate with friendship, certainly not obligations of the play-attending type, and not even obligations of a fundamental sort. If you and I are Facebook friends, we do not need to know anything about each other, much less care for each other.

By the same token, Facebook friendship does not confer any of the real joys of friendship, like sharing a really deep secret, or sitting in a room together in silence, or having a rip-roarin’ good time together. (Two years ago, Hal Niedzviecki wrote a memorable piece in the New York Times Magazine describing how he invited his 700-or-so Facebook friends to a party. One person showed up.)

On Facebook, the concept of “friendship” is promiscuous, attaching itself to just about any human interaction.

Lots of people have written about this, and speculated about what it all means, in pieces ranging from the very thoughtful, like this one in The Chronicle of Higher Education, to the less thoughtful, like this one in Newsweek. (Although it’s slightly off-topic, I particularly enjoy Elizabeth Bernstein’s article in The Wall Street Journal about how online “friendships” can ruin real friendships.)

What I’d like to stress is that, whatever else you make of Facebook friendship, it underscores the great and significant discrepancy between: 1) the scale of contemporary life, and 2) the scale of friendship.

The scale of contemporary life is so vast that it is hard to fathom. For most of us, completing even the most homebound tasks – using the bathroom, eating a meal – involves us massive networks of pipe and road, transportation and production, people and powers. For most of us, going to work means traveling a fair amount of horizontal distance – and then logging on to connect ourselves to even more far-flung places, to cover an even greater span of space. Ours is an era in which the grand forces are all centrifugal, as William Leach has written, and in which the injunction is to “extend your reach.” We are told to minimize the time we spend doing things – to seek efficiency – in order to extend ourselves further. Services like Facebook are inevitable in this context, since they both allow and encourage the extension of our reach across great, seemingly limitless distances.

By contrast, the scale of friendship is necessarily limited. Friendship is a bounded relationship, one that thrives on intimacy and depth rather than extension and breadth. Friendship thrives, as C.S. Lewis wrote, by withdrawing people from networks of collective “togetherness” into smaller and more partial spheres. Even if, as Lewis says, friendship is the least jealous of loves, it is always to some degree exclusive. Friendship flourishes when given lots of time and little distraction: conditions which you cannot extend to more than a very few people. In the end, the scale of friendship is limited because each of our lives is limited. Our time is limited, and friendship requires time. (It is telling how silly the dominant values expressed in our language sound when they are applied to friendship; no one has ever complemented someone else by calling her an “efficient” friend.)

Put in starker terms, we might say that Facebook friendship is part and parcel of a culture that values a way of living that – while on certain terms quite interesting and rewarding – is inhospitable to the cultivation of real friendship.

We live in a world where we encounter so many people who could be our friends – and perhaps Facebook friends should be regarded in those terms, as people who might be our friends if certain contingencies were different – but where, for that same reason, it becomes harder and harder to be friends with any of them.

Of Friendship, Proximity, and the Grave