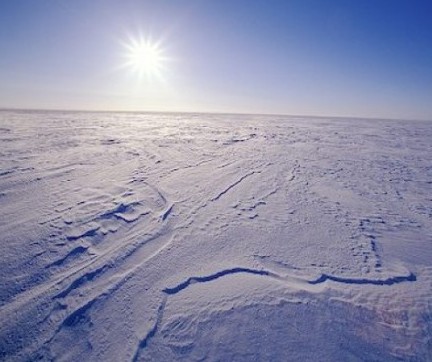 The season of snows was preferred, that I might experience the pleasures of suffering, and the novelty of danger.

Although the sky was clear and pale this morning, I had the sensation as I walked to work that snow was falling. By my guess there are about fourteen inches of snow on the ground already, and the air temperature, according to reports from the airport, is minus twenty-nine Fahrenheit: warm enough for Ivan Denisovich to walk to work and therefore warm enough for me.

I had the sensation that snow was falling because I felt what I thought were snowflakes on my nose and eyelashes, like in the song. But in fact steam was rising from beneath my scarf, lighting on my lashes in the form of little droplets and freezing there. When at last I arrived at my building I resembled one of those insane arctic explorers in the photographs whose eyes are frozen nearly shut by the polar slush.

My legs also felt the cold—at the knees, where my coat stopped. And the tip of my left index finger, which I sliced one morning in sixth grade, attempting to repair a model Chevy I had glued wrong the night before—this, too, registered the cold. It is usually the first to do so. And my feet, of course, felt the cold. But I was otherwise very comfortable. As I walked the streets between my house and my office I saw neighbors and strangers sprinting out to start their cars and warm them up, a practice that is good for the private combustion chamber, no doubt, but bad for the public air.

Keep moving, and an extra layer of wool does just as much good as an already-warm car—and far less harm.

And even now, as my students write in this frigid classroom, the pad of my own hand feels the bite of the cold table-top it rests on. Our room in this old building—the Humanities are always relegated to the oldest buildings—cannot be warmer than fifty-five or sixty.

Many people tell me that I should not walk to work on such days because doing so “isn’t good for you.” When I confess that I sometimes do not eat until dinner time, or sometimes not at all, I am told the same thing. But these gentle reprimands have no purchase on me. Deprivation is good for the soul—and also for the body.

When I climb out of bed at five o’clock in morning and slalom down the stairs to the kitchen to start the coffee, I am firm in my resolve to walk the mile and a half to work, on this frigid morning as on others. I am firm because, for starters, I have given my word on the matter, if only to myself.

And by now this walking has become habitual enough that, if for pressing reasons I do not or cannot walk, I feel that an important part of my day is either missing or has been denied me. I feel, intellectually, the loss of walking the way I would feel, physically, the absence of caffeine, life’s most pleasant addictive substance. Deprived of my walk I am deprived of time to be alone, of time to think, to be reminded that I live in the world regardless of how sedentary and abstract my life might otherwise be—in it rather than over or across it. Without my walk I feel bereft of time and occasion to see the built and natural landscapes at human speed, from man’s eye-view.

But, more fundamentally, I am firm in my resolve to walk the mile and a half because it matters to me that I know both how the cold feels and what it means, neither of which can be known by my walking eight steps into an already warm car, driving a very short distance, and then walking a few dozen steps from my warm car to my (usually) heated building. To know what the cold feels like I must have the chance to be cold, and then the resolve to be cold, for how the cold feels is known by observation, and observation (as John Muir knew well) is impossible without a willing subjection of the self. I must feel the regions of the skin tighten, the mysterious surfaces harden. I must feel the burn of exposed flesh in the stinging wind. I must feel the hardening even of the soles of my boots, which in such weather as this lose their cushion. I must feel the many ways in which life itself becomes hard.

What it means, the cold, is known in part by observation and therefore by subjection and submission. But it is also known by reflection, even as art is known in part by the criticism that completes it. What the cold means is known by memory and by language. We reflect on what we ourselves remember about the cold and about its place in the various narratives of human suffering: the story of a young Elie Wiesel, for example, running through the snow as the eastern front unraveled, or the tale of Ivan Denisovich marching to work on that one good day in his life, or even John Muir’s account of chasing his beloved water ouzel out into the cold and barren snowscape. You cannot expect a warm man to feel the cold, Solzhenitsyn tells us. And he is right. Poor Tom, loose in Lear’s storm, miserable and cold, knows something that Goneril and Regan can never know, for, cold-hearted though they be, they will never willingly be cold.

And for what he knows, for what he is willing by suffering to know, Poor Tom—Edgar in disguise—wins something for himself and for those around him, notwithstanding “the weight of this sad time” he must now obey, or what is grimly implied by Kent’s journey “shortly to go.” When you recollect and reflect upon and articulate the cold, you see at last that the cold is good. In the cold you know you are alive. You see your breath—the breath that Lear looks for as he holds the glass to the lips of the dying Cordelia—and you know that you’re alive. You are alive because you suffer. Patior, ergo sum.

There is no life in Cancun, no life on the beach at Daytona. There no one feels alive—not the way one feels alive in the cold. For it is in the shivering and chattering and goose flesh of the cold that we are nearest the truth of the fragile and desperate human condition. Lovers of snow and cold are qualitatively different from the lovers of sun and surf; they are different moral beings altogether. Our great novelists have been Russian, not Texan; our great composer was an Austrian, not a Californian. No poet named Frost ever wrote a poem titled “Summer.”

It is fitting that we in the Humanities, so insistent that the business of a university is to make humans, should be swept off into the corners of the oldest buildings on our campuses. The knowledge and wisdom we seek and seek to impart do not require falsifying lenses or instruments of torture. We are as austere as monks in our work if we are doing it well. We ask for books and a room in which to talk about them. The computer is of no use to us, really, and the best of us know that the gee-whiz classrooms of the new millennium will produce more Gonerils and Regans than Poor Toms. We must dress warmly for a day in the office, and the students who come to see us there are as wooly as we.

But what ignoble savages we have become, spending our travel money to hear papers that do not feed the hungry or clothe the naked or provide company for the widows and orphans. How unkindly we speak of our colleagues, despite the years of “literature’s civilizing influence.” How quickly we move further and further away from the dark neighborhoods of downtown, despite our protests against sprawl and racial strife. How imperviously we commute in our Volvos all those miles to work to talk about oppression, and then all those miles home again to ignore it.

All the liberal learning in the world, to put things another way, will do nothing for those who refuse to feel the cold, for life is not lived between the covers of books or in the corridors of Founders Hall, whether heated or not. We must live on cold ground, feel the hand of the wind as it slaps us with correctives, look upon food and warmth and refuse them now and again. We must think on Kent and Edgar, Lear and Gloucester, and even on the fool. Certainly Ivan Denisovich tutors us, but he does not make our resolves for us. Solzhenitsyn blessed his own prison years. I once heard a Romanian priest tell of his liberation from eleven years in solitary confinement. He was clutching his bedpost, begging to be left alone. Students do not know enough of these stories, nor do enough of their teachers love them. Too few feel the frost; too few willingly endure its bite.

As for me, God willing, I shall walk through the cold on such northern days as this—that I might be its earnest and deserving pupil. “It is good for me that I have been afflicted,” saith the psalmist. “Henceforth,” said Gloucester, “I’ll bear / Affliction till it do cry out itself / ‘Enough, enough,’ and die.”

The Financial Crisis and the Scientific Mindset