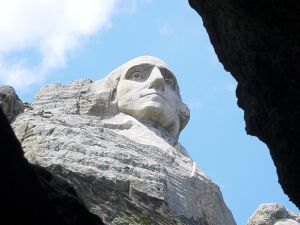 Hillsdale, MI. Most of us don’t know what we owe to George Washington.  Abigail Adams wrote to her husband John, when she first saw him, “I thought the one half was not told me.”  That George could charm the difficult New England lady reminds us how John Kennedy or Barak Obama affect some (even intelligent) women.  George was six feet three and, in his best days, almost two hundred and fifteen pounds; as impressive on a horse as Michael Jordan on a basketball  court–a God-given man.  Jefferson said, “He was the best horseman of his age, and the most graceful figure that could be seen on horseback.”  He could dance–could have won “Dancing with the Stars” back then.  Unlike his sexy modern presidential successors, he saved our country from what we are about to become.

The Continental Army was restive by the time it was fairly comfortably stationed at Newburgh, up the Hudson River from New York City, in 1783.  The officers hadn’t been paid in quite a while; many of them were beyond the reach of patriotic appeals to charity.  Congress was meeting in Philadelphia, and some nationalists wanted to squeeze them a little.  If, perhaps, the congressmen were to think that a rebellion might just break out…?  Nationalists in and out of the army saw the potential: use the military to get the politicians back in line.  No need for an actual military takeover; just an implied, background, hang-over-your-head suggestion.

The officers wanted to get paid, and to be recognized for the incredible sacrifices they had made.  Many of them were about to go home to ruined farms, struggling businesses, families who had been all but abandoned.  Many of them had been the object of specific British retaliation, and they were in no mood to accept the fate of our veterans returning from Vietnam.  Nationalists of the stature of Alexander Hamilton, who was like a son to the childless Washington, and Robert Morris, the financial genius who had kept the Continental Army afloat, entered into what has become known as the “Newburgh Conspiracy” to force Congress to adopt an impost amendment to the Articles of Confederation, and thus give the national government an independent source of income.  The nationalists, by and large, thought that the question was not whether the national government would have too much power, but rather, if there would be a national government at all.

George Washington had become a nationalist because as commander of a national army he had been forced to see American independence from a point of view that transcended local loyalties.  He loved his army.  He wanted to go home to Mount Vernon and, like Cincinnatus, take up the plow again, but he still felt the collar of public duty.  The nationalists thought that if they could get him on board with their plot, or at least get him to stay neutral, there would be nothing in the way of their mini-revolution.

Although the plot was complicated and never very well organized, the key to it all was the character of George Washington.  In May of 1782 Col. Lewis Nicola wrote to Washington at Newburgh suggesting that he consider a strong sentiment in the army and amnog the people to make him king.  Washington wrote back, “you could not have found a person to whom your schemes are more disagreeable,” and cut off such talk at the knees.  He was familiar, in other words, that there were “schemes” out there, which to Washington threatened to undo all that he and the country had sacrificed for, for almost twenty years.

He was not without a sense of drama.  He had caused Joseph Addison’t play Cato to be performed several times for his officers.  He had probably adopted its character for his public persona, just as Ronald Reagan (a real actor) took on consciously the role of The Gipper.  When the officers met at the common hall at Newburgh on the Ides of March, 1783, probably to pass resolutions that would have frightened the figurative pants off the members of Congress, Washington rode suddenly into the meeting–one he had promised not to attend–and insisted on taking the podium.  Planning (and pretending) to fumble with a letter from a Congressman, he reached inside his coat to put on a pair of spectacles, which only a few men knew that he needed.   “Gentlemen,” he said, you must pardon me.  I have grown gray in your service and now find myself going blind as well.”  The room stiffened; tears came to hardened officers’ eyes.

Washington then gave them one of the most stirring addresses in American military or political history, ending with this exhortation, which all Americans on this “President’s Day” should take into their hearts:

And let me conjure you, in the name of our common Country, as you value your

own sacred honor, as you respect the rights of humanity, and as you regard the

Military and National character of America, to express your utmost horror and

detestation of the Man who wishes, under any specious pretences, to overturn the

liberties of our Country, and who wickedly attempts to open the flood Gates of Civil

discord, and deluge our rising Empire in Blood.  By thus determining, and thus acting,

you will pursue the plain and direct road to the attainment of your wishes.  You will

defeat the insidious designs of our Enemies, who are compelled to resort from open

force to secret Artifice.  You will give one more distinguished proof of unexampled

patriotism and patient virtue, rising superior to the pressure of the most complicated

sufferings; And you will, by the dignity of your Conduct, afford occasion for posterity

to say, when speaking of the glorious example you have exhibited to Mankind, “had

this day been wanting, the World had never seen the last stage of perfection to which

human nature is capable of attaining.”

We have a Constitution and separation of powers and at least the idea of limited government because of the character of George Washington.  Don’t think of Monday as “President’s Day.”  Several people have said that the history of the presidency from George Washington to Barak Obama is a clear refutation of the theory of evolution.  While that is probably true, it does not do justice to the Father of His Country.