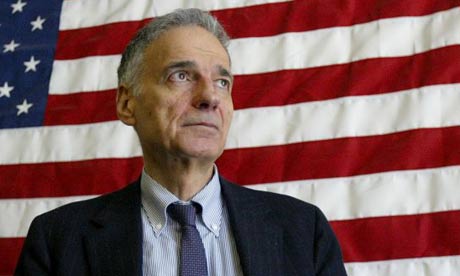 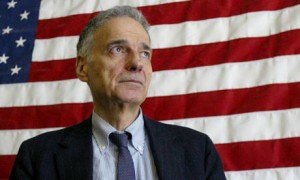 Jacksonville, AL.   My school, Jacksonville State University, recently hosted Ralph Nader.  It was a successful visit.  A large crowd turned out for the speech.  The event was exciting and thought-provoking.

I drove to Tallahassee to pick up Nader and his aide, Matt Zawisky.  The ensuing seven-hour drive to Alabama was interesting to me as both a political scientist and long-time Nader admirer.  I was glad to learn that the man is authentic.  Up close, he’s the same person I’d hoped he was from a distance.  He has a playful and sardonic sense of humor.  His mental acuity and physical condition are top-notch, which are especially impressive considering he is 76 years old.  He is well-mannered, patient, and considerate.  Nobody is perfect but it’s nice to know that someone can be famous, with influence if not power, and still be a sincere, good person.

The road trip gave me lots of little memories to ponder and share, including the roadside stop at a self-serve peanut stand in rural Georgia.  In the car, we talked about a range of subjects, from Jerry Brown and the Green Party to the RMS Titanic and Johnny Cash.  Nader had positive words for another one of my political favorites, Ron Paul, although he acknowledged substantial differences on the issue of government regulation.

I know there are many conservatives and libertarians, and more than a few trendy and partisan liberals, who have no use for Nader.  He’s dismissed as a meddling do-gooder, baneful socialist, or bothersome crank.  He’s none of the above, but I can understand why these images have been affixed by some.  You don’t have to endorse everything Nader has said, done, or symbolized to appreciate at least some of the good he represents.

Yes, he is a liberal, but he is an older, more genuine type of liberal.  Closer to WJB than LBJ, to Fighting Bob La Follette than Slick Willie Clinton.  There’s a reason he has chosen to run against the pantheon of many modern liberals: Clinton, Gore, Kerry, and Obama.  This is no accident or ego trip.  Contrary to what ignorant Democrats think, there is nothing irrational or self-defeating about Nader running against modern liberals.  We’re talking about competing ideological species, with different traditions, heroes, priorities, funding bases, and levels of honesty.  It’s the difference between Jefferson and Hamilton, Frederick Douglass and Abraham Lincoln, Gandhi and FDR.

Modern liberals focus most on equality, although their main electoral leaders are elitist to the core.  Nader emphasizes justice and democracy.  In the 1940s, Dwight Macdonald pointed out the difference between the newer “totalitarian liberals” coming out of the New Deal and “real, old-fashioned, unreconstructed” liberals who believed in “freedom and justice for everybody,” who were “dangerous men, devoted to high ideals and willing to challenge established institutions.”  A common Jeffersonian perspective—although not identical in every particular—is why conservatives such as Bill Kauffman, Pat Choate, and Justin Raimondo have sometimes supported Nader for president.  Of the three top candidates for president in 2004 and 2008, Nader was clearly the most consistent in his opposition to empire and war.

There is a Front Porch Republic sensibility to Nader the man and Nader the message.  Of course, some of us find him more to our liking than others.  I don’t know if his house has a front porch, but Ralph still returns to his hometown of Winsted, Connecticut, on a regular basis.  I was surprised by how much time Nader spent during his Florida and Alabama speeches talking about the values he learned from his mother and father, and giving moral and character advice to students.  It wasn’t all political and government wasn’t portrayed as the cure for all of society’s ills.  Nader is aware of the rich politics-transcendent and even apolitical tradition of civic engagement.

In my introduction to his speech, I tried to move beyond a Wikipedia sketch, to put his biography into a philosophical context.  My primary intended audience was Calhoun County, Alabama, students and community members who knew little about Nader other than his familiar name and liberal reputation.

We are privileged to have Ralph Nader with us tonight.  This is a person named by Time magazine as among the 100 most important Americans of the twentieth century.  Atlantic magazine counts Mr. Nader among the 100 most influential people in American history.  He was one of only four living individuals so honored.

His resume is impressive.  Graduate of Princeton University.  Graduate of Harvard Law School—in the top ten percent of his class.  Became nationally famous in 1965 through publication of his book Unsafe at Any Speed and the resulting confrontation with General Motors Corporation.  Author of many books.  Almost single-handedly responsible for saving thousands of lives by his successful push for seat belts, air bags, and other safety features as standard in automobiles.  The driving force behind multiple laws passed by Congress.  Host of Saturday Night Live.  Four-time presidential candidate.  A folk hero to millions.

Although he is often identified as being on the liberal side of the political spectrum, the appeal of Ralph Nader cuts across ideological lines.  He is best described as a populist—someone who champions democracy, rule by the people.  It’s an old and honorable tradition, stretching back to Thomas Jefferson, who advocated “equal rights for all, special privileges for none.”  We’re gathered here tonight in Jacksonville, so it’s fitting to quote another great American populist: Andrew Jackson.  Jackson warned against “a monied aristocracy dangerous to the liberties of the country.”

Mr. Nader’s populism has come out over the years not only when challenging the power of big corporations to run roughshod over the rights of individual citizens and average Americans, but also as he has pushed for term limits for politicians, worked against congressional pay raises, and condemned outsourcing or exporting of American jobs.  Unlike typical Ivy League graduates, Mr. Nader is a genuine friend of the many—of consumers, citizens, and taxpayers.  He could have easily gone to work for a Wall Street law firm or K Street lobbying group, but instead he chose to become a full-time advocate and activist for folks who don’t have enough money to buy politicians in D.C. and Montgomery.

A son of immigrants from Lebanon, who owned and operated a restaurant and bakery, Ralph Nader grew up in a small town in Connecticut.  He was raised by hard-working parents who taught him traditional values that he holds to this day.  His book The Seventeen Traditions is all about these values.  Things like honesty, thrift, fairness, the common good, and a sense of right and wrong.

Some of us believe that the rise of giant, monopolistic corporations and their influence on government was not a conservative cause.  It was a revolutionary rejection of traditional American values…of competition, free enterprise, and democracy.  The values pushed by many Fortune 500 companies often go against the best American traditions.  What’s conservative about materialism, personal debt, planned obsolescence, and Madison Avenue with its phoniness and artificially created “needs”?

Ralph Nader is a true believer in concepts like the Constitution, the rule of law, checks and balances, local community, and national sovereignty.  Mr. Nader is a patriot.  In the late 1990s, he wrote an editorial in The Washington Times, a conservative newspaper, calling on the owners and managers of the multinational corporations to say the Pledge of Allegiance at every annual shareholder meeting.  For example, “General Motors Corporation pledges allegiance to the flag of the United States of America, and to the republic for which it stands, one nation, under God, indivisible, with liberty and justice for all.”  He followed this up with letters to the CEOs of the 100 largest U.S.-based corporations.  The response?  Only one big company said, “Yes, that’s a good idea” . . . and they didn’t end up doing it.  The other 99 were not very interested in pledging allegiance to America.  Their loyalties lie elsewhere—perhaps to the Almighty Dollar.

Caterpillar, Kodak, and Hewlett-Packard decided a once-a-year gesture would not be productive use of their time—even though reciting the pledge would only take 15 seconds!  Coca Cola called itself an “international company.”  Anheuser Busch announced it is a “global company.”  Delta said “No.”  Allstate said it would be inappropriate.  Aetna called it undemocratic.  3M said it would be “disrespectful” to other countries where it operates.

Conservatives like Pat Buchanan highlighted these responses to Mr. Nader’s idea in 1998, noting the irony that corporations who have been chartered in America and have benefitted greatly by government tax breaks, marketing, bailouts, and military protection, have so little sense of loyalty to the United States of America.  But that’s the downside of globalization.  In Jacksonville, we know something about that with Fruit of the Loom.

You’re in for a treat tonight.  The speech is entitled “The Golden Rule or Rule by Gold?”  Afterwards, there will be time for questions and answers, and book signing.  Ladies and gentlemen, please give a warm Alabama welcome to a distinguished attorney, author, and citizen: Ralph Nader.

P.S. – Actually, cotton is no longer king, but there are a couple small cotton fields along Hwy. 204 on the way from Jacksonville to Gadsden.