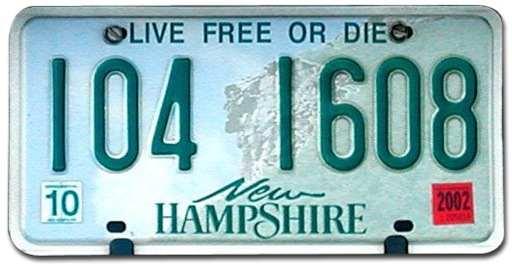 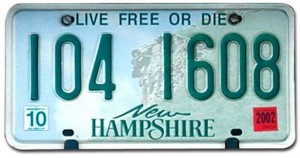 HILLSDALE, MI.  Live a little.  Unbuckle your seat belt.  It’s the only state left where you can “un-click it and not ticket.”  The other 49 have either primary or secondary seat belt laws.  “Secondary” means that the gendarmes cannot pull you over only for failure to buckle; they can cite you for not wearing the device, but only if you have committed another offense first.  “Primary” means they can stop you if they suspect you are not buckled up (they don’t have to have clear visual proof, since so many of today’s cars have tinted glass that would make it hard for the officer to be sure) and ticket you for no other reason.

New Hampshire has held out so far, but the pressure has been on since 2007, put on by the Feds and emigrants from the People’s Republic of Massachusetts.  The good citizens of the Granite State probably know they would have to remove their slogan (see above) from their license plates if they cave.

Having just had imposed by Congress what is arguably the worst single piece of legislation in the history of the republic, perhaps it is time to take a moment to reflect on what law is all about, using seat belt law as example because it 1) affects all of us, 2) is in most cases rather low on the liberty and limits laundry list, and 3) shows exactly how governments tend to make bad laws worse.

Restraint devices in transportation vehicles go back a long way.  I suspect that somebody suggested them for war chariots, but the serious era of vehicular restraint begins in the 1950s, when almost no drivers thought that belts were a good idea.  The aftermath of Ralph Nader’s Unsafe at Any Speed in the 60s produced Nader buzzers, those little screamers that went off a few seconds down the road if you failed to buckle up.  We all learned to disable them within minutes of buying a new car.  But Nader and his Raiders made safety a Serious Matter.  When something becomes serious in a democracy, those-who-will-do-us-good take notice, and inevitably start a program of education that leads to legislation that leads to coercion.

Tocqueville noticed in the 1830s that in a democracy, “laws are almost always defective or unreasonable.”  With a few exceptions, such has always been true under any form of government.  Tocqueville again: “The whole art of the legislator consists in discerning well and in advance these natural inclinations of human societies in order to know when one must aid the efforts of citizens and when it would rather be necessary to slow them down.”  The problem is, this requires considerable prudence, which democracies are not noted for, and it also assumes that legislators understand that there are indeed “natural inclinations of human societies,” or, more basically, that there is such a thing as human nature. Troublesome things aside, Tocqueville recognized that the legislator’s biggest problem is doing good; “that by wanting to improve everything around him, he will finally degrade himself (my emphasis).”

Many people since Aristotle have been convinced that good law can improve morality in the polis.  While that may be true (and it is not my task here to prove or disprove it), it should be beyond dispute that bad law, like bad ideas, can have bad consequences.  Bad law often leads to tyranny.  Bad law erodes respect for law in general.  Even good law cannot take the place of what Tocqueville calls “mores,” and bad law that tries to replace what should be the responsibilities of the church and the family also weakens them.

We might start with the definition of a bad law by saying that any law that is 2700 pages long cannot by definition be a good law.  But, in practical terms, a working definition of a bad law is one that runs counter to the clearly accepted wisdom of the community, one that cannot be enforced except by extreme measures, or one that drastically changes existing arrangements for the sake of an anticipated goal.

Seat Belt laws came about entirely because legislators were convinced that they would improve things, namely, the safety of the general public.  Death and maiming by automobile has been with us since the internal combustion engine put vehicles powered by gasoline on the roads.  By the 1960s zealous reformers learned to focus on one aspect of the problem, the quickest fix and the one most likely to gain public acceptance if not public favor.  Restraint, they reasoned, equals safety.  They had no research to prove the theory; it just seemed right.  It wasn’t until 1984 (!), despite millions of public dollars spent on “educational” campaigns, that New York finally enacted the first primary clickit law.  In the quarter century since then, every state except New Hampshire has followed with some kind of law, although they vary wildly (see here for current status Safety belt use laws).

And guess what?  Deaths by automobile, measured in millions of miles driven, have gone down.  You can easily find dozens of websites that “show” how you are 63% less likely to die in a car crash if you are properly restrained.  Last year the number of highway deaths fell to 34,000 (somewhere near the battle deaths in the Korean War) for the first time since 1954, when, of course, the number of highway miles driven was much smaller.  Nobody does much research on the issue–it’s one of those, you know, “settled questions,” like global warming was about a year ago.

1954 is an interesting year to come up for comparison.  It was two years before the National Highway Act (almost as big a transfer of power from the states to the national government as the current “Health Care” law) and just before the Volkswagen started to revolutionize the American car market.  It was also twenty years before the oil cartel decided to squeeze us into at least a measure of gasoline thrift. In 1954 we could still work on our own cars (my friends could take them apart and put them back together blindfolded) and the new model year was an event as anticipated as the World Series.  Cars ruled!  By 1984 government regulation, big oil, technological “advances,” and early globalization had transformed a cultural icon into an international utilitarian commodity that required a mega-dollar computer to change the oil.  Chevy v. Ford was important; who really loves a Toyota?

Now that GM stands for “Government Motors” who can love a Chevy?  In many ways, seat belt laws paved the way for this transformation.  Government straps me in, government keeps me safe.  Government protects the air, so government mandates emission controls.  The car companies get used to being in bed with government, so they both can keep me safe.  They have improved everything around them.

People die in cars because they drive too fast and/or are distracted by tiredness, drink, drugs, or talking on cell phones.  The latter will inspire the next round of “improvement” laws, and we will be even safer.

But has anyone asked hard questions about why death by automobile has gone on a downward trend, or what it has cost?  I suggest that it is because of improved roads, improved automobile design (which is the history of the machines long before government got involved), improved understanding of safety principles, and, maybe, just a little to do with seat belt laws.  Common law principles would have arrived at a similar position to the one we find ourselves in, and with much less cost to limits and liberty.  Think about it: if seat belt laws as they now exist were to be strictly and uniformly enforced, law enforcement agencies would be increased by a factor of at least ten and we would be in a police state.  Is this likely to happen?  Probably not soon.  Are seat belt laws likely to be repealed or significantly modified?  Probably not ever.  The Iron Law of Government is, once you’ve got it, it’s really hard to get rid of it.  True of seat belts, true of much more consequential laws.

Meanwhile, drive to New Hampshire and unbuckle, and cheer the Granite staters on.  They’ll probably cave soon, and pass a bad law.  By the way, their death by automobile rate is very low.