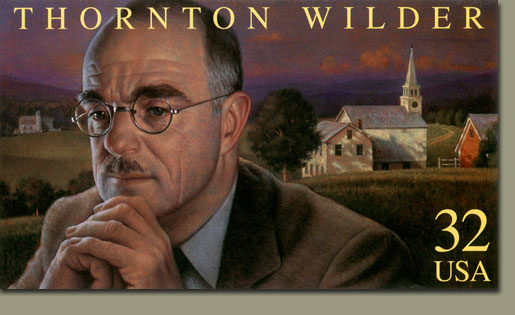 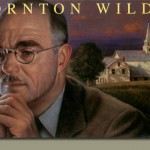 New York, NY Last night, during an overnight trip to New York City, I had the opportunity to attend an Off-Broadway revival of Thornton Wilder’s 1938 play”Our Town.”  The production was modest, simple, and quite moving, and the final scene – set creatively in a cemetery through the use of the dead sitting on simple chairs throughout the theater, silently pondering eternity – evoked misted eyes and wistful regret over hours, days and years that slip by too often without notice, gone by the simple fact of having to live busily through them.

The second act – “Love and Marriage” – I thought was particularly striking, given the setting of the play in Grover’s Corners in a theater in Greenwich Village, New York City.  Walking to the theater, I had to pass a number of sex shops, and found myself reflecting as well on the attraction that New York City holds to countless young people – especially recent college graduates – who are enticed especially by the opportunity to try out countless different partners in a dense population of prospective mates.  The television program “Sex in the City” was essentially based on this aspect of New York (and, for that matter, countless 80s and 90s sitcoms, like “Seinfeld” and “Friends”), the promise of endless sexual partners where variety reigned, regret was unfashionable, and commitment, if present at all, a fuzzy possibility in the distant future.

In the second scene of “Our Town,” the main young characters – Emily Webb and George Gibbs – speak haltingly and charmingly of their growing affection and love, in terms almost unrecognizable not only in New York City, but one dare says in the world that we increasingly inhabit, one distant (if not merely in space and time) from Grover’s Corners.  George struggles with his felt sense of obligation to attend college to study agriculture, wanting more to stay put, to marry Emily and to start work on his farm immediately.  He states, “I guess new people aren’t any better than old ones.  I’ll bet they almost never are.”   He then tells Emily that there’s no point going away to college if you already know the person you are “fond of,” and that person is “fond of you.”  While they both prove to be terrified of marriage on the day of their nuptials – each engaging in a “soliloquy” that we are to understand is an expression of their inner fears – like their parents, they learn to live together and grow in love, and when the time comes, to die alone yet mourned by their community and join the fellowship of the dead on the hillside above the town.

The juxtaposition of Grover’s Corner and New York captures the essence of two different worldviews.  In the one, the challenge of human life is to reconcile our capacious longings with our need for home, belonging and fellowship, and the scales are tilted decisively in favor of the latter.  Mrs. Gibbs speaks longingly in the first Act of her desire to visit Paris before her death, but we discover at the end of the play that she gives her “legacy” – which was to fund her journey – to her daughter and her new husband so that they can make some repairs on their farm.  The play’s end shows us that our ultimate orientation toward Eternity throws into relief the insignificance of the affairs of daily life, yet that the modest daily acts of cooking, cleaning, discussing the day’s events, are suffused with a kind of beauty and significance that too easily escapes us when we fail to notice the fact of living.   The fellowship of those with whom we pass our lives, and with whom we ultimately lay in burial, connects the diurnal to the eternal.

In the other worldview – there again all around me as I exited the play into the Village bar scene in full swing – institutionalizes discontent, reinforces restlessness, and fosters and endless and intense suspicion that something better lies around the corner, reducing any commitment we might have to the “given” in favor of the “not yet.”  “Belonging” is understood to be complacency; limits are seen as unacceptable oppressions; imperfection is a condition needing cure, solution, repair – and barring those, escape.  Both conditions generate regret, because we are creatures of belonging and longing.  Still, in the decisive manner that we have institutionalized discontent we can see the source of today’s most pervasive pathologies – ranging from consumerism to indebtedness, from profligacy to the nature’s plunder, from divorce to the childlessness of advanced civilization.  The starkness of our unchosen world of choice was discernible with intense clarity at the threshold between Grover’s Corners and Manhattan, between a world where it’s said that “people are meant to go through life two by two” and “tain’t natural to be alone,” and one in which we are surrounded by people but desperate to avoid the addition of one to the exclusion of imagined others.  Both are unchosen ways of life to the people living them – one of commitments, the other of endless choice.  Both inevitably give rise to discontents, but our choiceless culture of choice makes discontent a way of life.