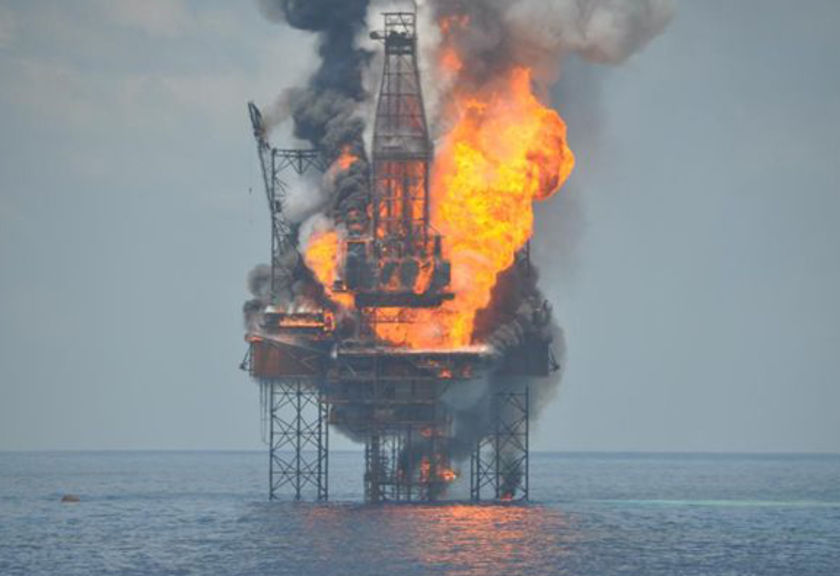 Two crises are unfolding half a world apart, competing for space on the front pages of the world’s newspapers and otherwise apparently disconnected. The first has been the unfolding disaster of the “spill” in the Gulf of Mexico (this word, “spill,” seems highly inaccurate to me – it is a hole, a gash, a cavity in the earth that we have created and from which crude oil is spewing forth. “Spill” makes it sound like it’s an accidental tipping out of liquids we have gathered, giving the impression that somehow we are in control. It’s not a spill, it’s a “spew”). The other crisis – suddenly arriving at everyone’s doorstep yesterday – is the Greek debt situation, precipitating what was momentarily a 1,000 point fall in the Dow yesterday, before settling in for a 3% loss and similar losses overnight around the world.

Despite their apparent disconnection, each of these crises arise from a similar source – our collective inability to live within our means. All accounts of the “spew” suggest that in our insatiable search for replacement of declining amounts of crude oilavailable in places where it’s relatively easier to bring it to the surface (i.e., on land), we are now increasingly forced to probe for oil in highly inhospitable places where the odds of just such disasters are substantially increased. Our national policy of “drill, baby, drill” in deep sea environments – endorsed alike by such political “opponents” as Sarah Palin and President Obama – can only be expected to result in growing numbers of such accidents, just as a nicotine addict can be expected to burn his fingers when he probes more deeply at the bottom of an ashtray for a butt that still might have something left to inhale.

The Greek debt crisis – what many “in the know” believe to be the first of several, and even many such national crises, likely to be replayed in some form in Spain, Portugal, Ireland, even England and possibly even the U.S. – is quite simply a consequence of a nation that has grown accustomed to living beyond its means for a long time, and which now believes itself entitled to that condition on a more or less permanent basis. The ancient Greeks, particularly its great philosophers Plato and Aristotle, worried that democracy was a debased and self-destructive regime because it consisted of the “many poor” who would engage in class warfare against the “few rich” and create an unstable condition of “stasis” and civil war. Some ennobled version of democracy might be imaginable, but only if democracy was understood to mean more fundamentally a form of “self-rule” – based upon an ideal of citizenship in which citizens would “rule and be ruled in turn.” What is now taking place in the streets of Greece is the most visceral manifestation of ancient fears – if not now the theft of the “many poor” from the “few rich,” then the theft of the many living from the not-yet-born. The marches, riots, looting and civil unrest consists most fundamentally of the demand that future generations continue to support the unruliness of the current generation. The ancients may, all along, have been correct – democracy can only “flourish” when it is based upon theft. We have simply not seen it for its true nature, because that theft has been labeled “growth,” and the main source of that “growth” has been the fuel now leaking in the Gulf.

Thus these two crises are even more deeply connected than a glance at the newspaper might reveal, as the worldwide belief that we could live permanently beyond our means was literally fueled by our brief and exuberant burning of most of the world’s supply of “easy oil.” Over the half-century or so, the world has enjoyed seemingly unlimited economic “growth” whose source was most fundamentally a sea of accumulated sunlight that was never “ours,” but which we treated as the property of the living generation without regard for the effects of our massive addiction upon the substance for future generations. This accumulation of millenia – allowing us to live for a time under the impression that humans no longer were dependent upon or governed by the earth – was tapped over the course of 150 years at increasing rates that led to its greatest amount in the early 2000’s (and the stock market at its highest level), and then suddenly began its inevitable decline with $150/barrel oil and a predictable economic crash whose inevitability was discernible to anyone who knew that the age of growth was over, and that our debt could only be repaid (if at all) by a long and painful time of austerity. We are living through the aftershocks of a world pressed by limits to growth, and – addicted to that condition of permanent thoughtlessness, and having been told that the permanence pf growth was ensured by the solidity of industry and government alike – today demand increasing debt to make up for declining wealth. The worldwide deleveraging that we have sought to forestall by means of “stimuli” and financial chicanery will be all the more painful and dislocating with every day that we put off our reckoning.

The ancient Greeks were the source of a kind of wisdom about self-government that today’s Greeks – and the rest of the world – have forgotten, only after Europeans and Americans (especially) over the past several hundred years explicitly overturned their influence – particularly the legacy of that inheritance in Christendom. Bans against “usury” – now regarded as quaint and incomprehensible – were most fundamentally bans upon current generations stealing from future generations. Limits upon debt were established to prevent people from living beyond their means, to constrain their appetites to what was appropriate within the limits of the world. It is an ancient teaching that we are rediscovering not by dint of wisdom and a habituated capacity to embrace self-rule, but by dint of having no other choice.

Several nights ago, Wendell Berry spoke to a packed – overflowing – auditorium in the Arlington library. Some hope is to be found in the fact that the audience was overwhelmingly composed of young people, wanting to hear from that older man some words about what we are now to do. And he concluded a marvelous evening of reflections and thoughts with a response to a question about Oil and Limits with the reply that he was waiting – as we should all be waiting – for someone to tell us that “we’ve got to use less,” that someone must make a criticism of our “standard of living” and speak in terms of “limits and context.” The context of which he spoke explicitly was that nature was speaking – “very noisily” – to those who would listen, and that the “news from the world” was quite clear that we needed to begin speaking and living under self-imposed limits – or those limits that would be violently imposed upon us.