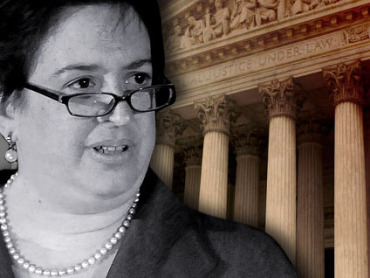 Jacksonville, AL.   There are many reasons to wonder about the wisdom of confirming Elena Kagan to be associate justice of the Supreme Court.  She is going to sail through the Senate, but there are still reasons to wonder.  Is her rise to power based on quality, Affirmative Action, or both?  (Sadly, suspicion of unfair and undeserved advancement taints both the talented and the less-so, when it comes to AA.)  There are legitimate concerns behind this question, ranging from allegations of scholarly publication weaknesses to the politics of sexual orientation.

Another reason to be skeptical of her fitness for the position is her three-year membership on a Goldman Sachs research advisory council.  It was probably an easy way to make money and pad her vita—in some ways inconsequential since she was presumably one of many advisors and had no management responsibilities.  Still, her affiliation with Wall Street does suggest that she is no populist.  That is par for the course when it comes to the Obama administration.

Even if Kagan is brilliant and well-qualified in every other way, a traditional conservative would vote against her on principle, since she undoubtedly embraces loose construction of the Constitution and legal protection for the destruction of babies in-utero, among other things.  But what strikes me most about Kagan’s nomination is the typically phony way Washington and the mainstream media are packaging the event.  In powerspeak, up is down and elite is populist.

The second story quotes Harry Reid as saying Kagan “has fresh ideas” because she’s been “out in the real world recently.”  Reid is trying to turn a negative into a positive. Kagan’s lack of judicial experience means she has been doing other things instead of being cloistered among black robes.  But are the other things she’s been doing part of “the real world”?  For the past decade, she has been professor and then dean of Harvard Law School, followed by a year as U.S. solicitor general.  That’s pretty rarefied living.  In the ‘90s, she was a White House counsel and policy advisor.  Is there anything “fresh” about a retread from the corrupt and sleazy Clinton years?

The first story reports, “The president has grown vocal in his concern that the conservative-tilting court is giving too little voice to average people.”  Obama—he of the famed analysis regarding bitterness and clinging—has now condescended to express a tender regard for the vox populi.  In between his policy talks with Bernanke, Geithner, and Blankfein; his strategy sessions with Chicago machine cogs; and his social visits with the Beverly Hills and Martha’s Vineyard set.  Somehow he finds time to worry about the little guys and gals and then express that worry while the press dutifully notes the expression.

We are told that Kagan is a manifestation of Obama’s concern that the common people are not being heard by the Supreme Court.  So he appoints a person who attended an exclusive high school, then Princeton, then Oxford, and then Harvard.  Just the sort of person who is most likely to be in touch with the struggles and aspirations, the stances and aims of We the People.  Ain’t democracy grand?

Kagan is a lawyer.  Only 0.4% of all Americans are lawyers.  Her current salary is over $150,000 per year.  For Americans today, the median annual income for individuals age 25+ is $40,000.  You can argue that her distinguished educational pedigree entitles her to a high income, but it nonetheless places her far above most Americans.

Socioeconomic class is only one disconnect between rhetoric and reality when it comes to the Kagan selection.  If she is lesbian, as rumor has it, then she is definitely not average.  If she is not lesbian, she is very unusual as a 50 year old woman who has never been married.  She has no children, which is also unusual for a woman her age.

Each of these traits by itself means little.  There are tens of thousands of graduates from prestigious, if overrated, universities.  Not every woman is able to have children.  Added together, however, they do not depict someone who can relate to “average people” or vice versa.  Quite the opposite.  When you look at the aggregate effect of <1% + <1% + <1%, you end up with a nominee who is decidedly non-average.  How can someone so atypical be a voice for typical Americans?

If Kagan is seated, it will mean that four of the nine justices were raised in New York City.  New York is easily the largest city in the country but it still represents a mere 3% of America (8.5 million ÷ 309.3 million).  Where is the diversity?  Where is the multiculturalism?  As usual, it is highly selective and even the exceptions are elite-oriented.  If Kagan is confirmed, the court will be populated by three Jews and six Roman Catholics.  Zero Protestants.  Half of America is Protestant.

Obviously, the word Jew is ambiguous, since many modern American Jews have the ethnicity while rejecting the traditional religion, being atheists or the next-worst thing (Reform).  So you have Jewishness, in terms of bloodline, and Judaism, in terms of theology.  2% of Americans are Jewish.  1% of America identifies with Judaism.  3.5% of America is pentecostal, but I don’t expect any glossolalians to be on the High Court anytime soon.  We’re not quite at the point where we have religious equality in our fair land.  When, once again, a Protestant is appointed to the Court, s/he will more likely be Episcopalian than Assemblies of God.  Retiring Justice Stevens is the only Protestant right now yet his denomination is unknown, leading me to think that his religion is rather nominal—more of a cultural “Christian” than anything else.

I don’t care that Kagan is Jewish.  My favorite senator, singer, and savior are Jews. Feingold, Dylan, and Jesus.  (My only, not favorite, Savior.)  Although I understand homosexuality to be deficient on numerous grounds, I wouldn’t oppose Kagan for that reason, if she does privately fall into that category.  Five-term Senator David Walsh (D-MA) was one of the best members of the upper legislative chamber during the first half of the 20th century.  Apparently, he was also homosexual.  Some of my favorite writers are self-identified homosexuals who are undeniably talented and insightful (e.g., Gore Vidal, Andrea Dworkin, Amy Ray, Emily Saliers, Justin Raimondo).  “Some of my . . .” —yes, a cliché; yes, relevant.

When it comes to the Supreme Court, I don’t care about ethnicity, religion, or sexuality per se.  What bugs me is hypocrisy, phoniness, and the age-old problem of aristocracy.  If only the few really were the best!  But they aren’t.  So we’re left with the worst of all possible worlds: Rule by the incompetent and wicked few.

Many of my favorite candidates over the years have Ivy League schooling.  Like Kagan, Feingold is an alum of Oxford and Harvard Law.  Nader went to Princeton and Harvard Law.  Jerry Brown graduated from Yale Law.  Heck, even the libertarian rabble rouser Tom Woods has degrees from Harvard and Columbia.  It’s not about some know-nothing or sour-grapes guilt by educational association.  It’s about the cumulative effect of a Supreme Court justice’s life experiences moving her further and further away from the people she is governing.  Through an unelected lifetime position.  While posing, or being posed, as someone who gives “voice to average people.”  This neither started nor will end with Elena Kagan of Prinoxvard.

Since the 1950s, liberal Democrats have been champions of the Supreme Court and lower federal courts partly because they have been seen as guarantors of the rights of minority groups.  There is, however, some question concerning the nature of the minority most often protected by the judiciary.  While often rendered in the name of downtrodden minorities, judicial decisions are made by a privileged minority—namely, the wealthy and powerful.  The Supreme Court has long been dominated by Ivy League graduates and corporate attorneys.

The “Father of the Constitution,” James Madison, was interested in protecting the rights of the nation’s wealthy minority, in guarding against oppression by the unpropertied majority (Federalist no. 10).  It could be argued that the Supreme Court has generally operated exactly as it was intended to operate.  It has kept democracy in check.  Since the 1930s, it has exemplified the dual nature of the welfare state: discreet, large subsidies for the wealthy and powerful; well-publicized, small subsidies for the poor and unpowerful.

Members of the Court have often handed down decisions which benefit lowly members of society, but rulings have rarely disturbed the infrastructure of state capitalism and they seem to emanate more from a sense of noblesse oblige or upper-class mores than from principled, constitutional interpretation.  For minority groups to place their destiny in such an arrangement seems disempowering, if not dangerous, depending as it does on the magnanimity of five remote individuals rather than on creating solidarity among themselves or good relations with their neighbors.  Unfortunately, liberal politicians and journalists are not interested in deeper questions concerning majority rule, minority rights, and federal judges.

This isn’t personal.  Elena Kagan may be a kind, decent, intelligent, and knowledgeable human being.  But I do not believe any of those traits account for her appointment by Barack Obama.  And I do not believe her confirmation will give average people any greater voice in the circle of power.  Knowingly or not, she is a representative of political correctness and corporate wealth.  Not justice.  Not democracy.

A Presidential Proposal Worthy of the Porch