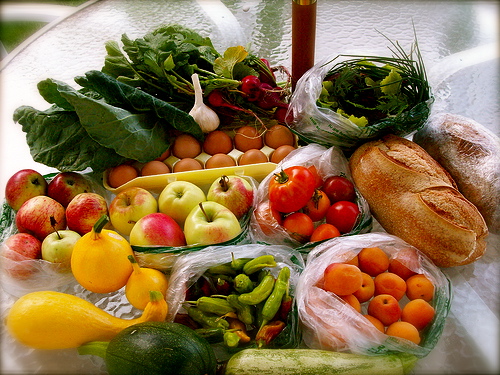 I tremble with gratitude

for my children and their children

who take pleasure in one another.

At our dinners together, the dead

enter and pass among us

in living and in memory.

And so the young are taught.

New Castle, Kentucky. I live in Henry County, Kentucky about 35 miles northeast of Louisville. Henry County is the only place I’ve ever lived for any extended length of time, and maybe more importantly the only place I’ve ever wanted to live. My father’s family has lived and farmed here for over two hundred years. I come from a family of storytellers and I believe I know some stories that go back to the beginning of my family’s time here. My father, Wendell Berry, was born in 1934; I was born in 1958. Daddy saw the end of farming with horses and the beginning of the industrialization of agriculture. I have seen the end of the agricultural community that involved the sharing or trading of work and the understanding of shared experience that made a community. I grew up working on some of the same farms my father worked on and with many of the same people he worked with. He would say the same thing, although I certainly wasn’t as worthy a student. Some of those people were friends and some were family, but all were a part of what Daddy calls “the membership.” In part he means by that people who honor the same things and know it.

My membership had a rocky beginning. I am 51 years old and have farmed with my husband, Chuck Smith, for almost 30 years. I think my parents are still surprised that I’m here. As a teenager I was not a willing participant in any kind of farmwork. I think I was good enough help once I got started, but getting me out the door couldn’t have been pleasant. When faced with vegetables to pick, hay to get up or tobacco to house, I remember saying, “I didn’t choose to live like this.” To be fair to my young self the work was hard; sometimes very hard. The days were hot and long. But I can say now that much of what I learned that really matters to me I learned in those days.

When neighbors traded work in those days the farm on which the work was taking place provided the noon meals, and oh what meals they were. They are absolutely clear in my mind as I sit here thirty-some years later. The meals that I remember most vividly were at Owen and Joyce Flood’s farm about five miles from where I sit now. I remember them in particular because Owen and Joyce were great friends of my family for four generations. We set tobacco, cut tobacco, killed hogs and worked in hay on their farm. The talk in the field was full of stories and jokes. I think the older people knew when the young ones were flagging and then talk would turn to dinner. What would we have? I can remember coming into Joyce’s kitchen and seeing platters of fried chicken, biscuits, creamed corn or limas or peas, beautiful tomatoes picked that morning, dressed eggs, pickled beats, marinated cucumbers, cobblers, and sweating glasses of iced tea. Joyce both worked in the field and cooked for us. I had to grow up and do it myself before I understood what a feat that was.

After we washed and sat down to the table the talk would slow down a bit, but as we began to get full it would pick up again. Much of that talk, it seems to me now, was for the benefit of the young people. Often that meant my brother Den and me. We were teased, encouraged, loved, and taught around that table. I think I knew then how wonderful those times were. Mostly I knew because my parents made sure I knew.

What I didn’t know then was how exceptional that food was. I grew up surrounded by good cooks–my mother, Tanya Berry, chief among them. I took good food for granted and longed for the junk food I wasn’t allowed. I do know now how good that food was, and even though I have shelves of cookbooks, those recipes are the ones I go back to again and again.

With the exception of some staples I think everything we ate at Owen and Joyce’s farm came from there. In the summer the vegetables and fruits were fresh, in the winter canned or frozen. The farms I remember well had chickens for meat and eggs, a cow for milk, a couple of hogs, beef cattle, and an orchard. In light of the economic times we are living in it is instructive to think of those self-sufficient, competent people–and to remember again that the situation we’re in now has not been inevitable. We are here, in part, because choices made in big places have worked against rural places and rural people.

But, I hasten to say, things are changing. We have dealt with food safety issues and have had to think about what homeland security might really mean. We know that our oil-based economy is not going to work forever and that maybe our food needs to be closer to us. I hope that there is a better understanding of what the countryside, and the men and women who farm it, mean to us. I grew up in a family that valued what it meant to be a good farmer absolutely. I never heard talk of someone being “just a farmer.” Maybe an understanding of what a good farmer’s knowledge means to us is reaching a critical mass. The wonderful thing about this awakening is that it returns to us the pleasure of eating.

And pleasure brings me back to those meals of my youth. I expect I would have been surprised then to know that I would think of those long work days with nothing but pleasure. The older I get the more I look around for what is left of what I hoped for. Sometimes I’ve had to look hard, and sometimes I’ve been close to despair. But for those of us who care about the young, hope is our duty, and I know that there is much to hope for. Every farmer’s market and CSA is a reason to hope. Grocery stores stocking local food is a reason to hope. Chefs and restaurant owners looking for farmers to partner with is reason to hope. I believe in Louisville, Kentucky, during the growing season, there is not much that you can’t find locally grown. If you can’t find it locally maybe you don’t need it.

What I believe we all need are times around a dinner table with people we love eating wonderful food. If you can, grow some of that food yourself. Find the farmers close to you and support them. Find out something about them and tell them something about yourself. Cook the food you buy from them and bring people together to eat it. Tell your stories around that table. If you know something about the farmers who grow what you’re eating, tell their story. In this way you will be saying what matters to you, who matters to you. You will be a part of my father’s “membership.”

This essay was originally published in Edible Louisville, May 2010.

Of Games, Gadgets, and God

My Àntonia at One Hundred