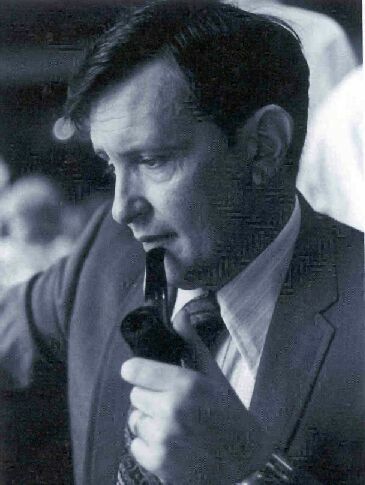 Remember the printed prose is always

half a lie: that fleas plagued patriots,

that greatness is an afterthought

affixed by gracious victors to their kin.

Marietta, GA. It was the spring of 2009.  I was in a class called Lawyers & Literature.  My professor, Jim Elkins, a short-thin man with long-white hair, gained the podium.  Wearing what might be called a suit—with Elkins one never could tell—he recited lines from a novella, Decoration Day.  I had heard of the author, John William Corrington, but only in passing.

“Paneled walnut and thick carpets,” Elkins beamed, gesturing toward the blank-white wall behind him, “row after row of uniform tan volumes containing between their buckram covers a serial dumb show of human folly and greed and cruelty.”  The students, uncomfortable, began to look at each other, registering doubt.  In law school, professors didn’t wax poetic.  But this Elkins—he was different.  With swelling confidence, he pressed on: “The Federal Reporter, Federal Supplement, Supreme Court Reports.  Two hundred years of our collective disagreements and wranglings from Jay and Marshall through Taney and Holmes and Black and Frankfurter—the pathetic often ill-conceived attempts to resolve what we have done to one another.”

Elkins paused.  The room went still.  Awkwardly profound, or else profoundly awkward, the silence was like an uninvited guest at a dinner party—intrusive, unexpected, and there, all too there.  No one knew how to respond.  Law students, most of them, can rattle off fact-patterns or black-letter-law whenever they’re called on.  But this?  What were we to do with this?

What I did was find out more about John Willliam Corrington.  Having studied literature for two years in graduate school, I was surprised to hear this name—Corrington—in law school.  I booted up my laptop, right where I was sitting, and, thanks to Google, found a few biographical sketches of this man, who, it turned out, was perplexing, riddled with contradictions: a Southerner from the North, a philosopher in cowboy boots, a conservative literature professor, a lawyer poet.  This introduction to Corrington led to more books, more articles, more research.  Before long, I’d spent over $300 on Amazon.com.  And I’m not done yet.

Born in Cleveland, Ohio, on October 28, 1932, Corrington—or Bill, as his friends and family called him—passed as a born-and-bred Southerner all of his life.  As well he might, for he lived most of his life below the Mason-Dixon line and became fully “Southernized.”  He had moved South (to Shreveport, Louisiana) at the age of 10, although his academic CV put out that he was born in Memphis, Tennessee.  Raised Catholic, he attended a Jesuit high school in Louisiana but was expelled for “having the wrong attitude.”  The Jesuit influence, however, would remain with him always.  At the beginning of his books, he wrote, “AMDG,” which stands for Ad Majorem Dei Gloriam—“for the greater glory of God.”  “It’s just something that I was taught when I was just learning to write,” he explained in an interview in 1985, “taught by the Jesuits to put at the head of all my papers.”

Bill was, like the late Mark Royden Winchell, a Copperhead at heart, and during his career he authored or edited, or in some cases co-edited, twenty books of varying genres.  He earned a B.A. from Centenary College and M.A. in Renaissance literature from Rice University, where he met his wife, Joyce, whom he married on February 6, 1960.  In September of that year, he and Joyce moved to Baton Rouge, where Bill became an instructor in the Department of English at Louisiana State University (LSU).  At that time, LSU’s English department was known above all for The Southern Review (TSR), the brainchild of Cleanth Brooks and Robert Penn Warren, but also for such literary luminaries as Robert Heilman, who would become Bill’s friend.

In the early 1960s, Bill pushed for TSR to feature fiction and poetry and not just literary criticism.  He butted heads with then-editors Donald E. Stanford and Lewis P. Simpson, who thought of the journal as scholarly, not creative, as if journals couldn’t be both scholarly and creative.  A year after joining the LSU faculty, Bill published his first book of poetry, Where We Are.  With only 18 poems and 225 first edition printings, the book hardly established Bill’s reputation as Southern man of letters.  But it invested his name with recognition and gave him confidence to complete his first novel, And Wait for the Night (1964).

Bill and Joyce spent the 1963-64 academic year in Sussex, England, where Bill took the D.Phil. from the University of Sussex in 1965.  In the summer of 1966, at a conference at Northwestern State College, Mel Bradford, that Dean of Southern Letters, pulled Bill aside and told him, enthusiastically, that And Wait for the Night (1964) shared some of the themes and approaches of William Faulkner’s The Unvanquished.  Bill agreed.  And happily.

Of Bill and Miller Williams, Bill’s colleague at LSU, Jo LeCoeur, poet and literature professor, once submitted, “Both men had run into a Northern bias against what was perceived as the culturally backward South.  While at LSU they fought back against this snub, editing two anthologies of Southern writing and lecturing on ‘The Dominance of Southern Writers.’  Controversial as a refutation of the anti-intellectual Southern stereotype, their joint lecture was so popular [that] the two took it on the road to area colleges.”

In this respect, Bill was something of a latter-day Southern Fugitive—a thinker in the tradition of Donald Davidson, Allan Tate, Andrew Nelson Lytle, and John Crowe Ransom.  Bill, too, took his stand.  And his feelings about the South were strong and passionate, as evidenced by his essay in The Southern Partisan, “Are Southerners Different?” (1984).  Bill’s feelings about the South, however, often seemed mixed.  “[T]he South was an enigma,” Bill wrote to poet Charles Bukowski, “a race of giants, individualists, deists, brainy and gutsy:  Washington, Jefferson, Madison, Jackson (Andy), Davis, Calhoun, Lee, and on and on.  And yet the stain of human slavery on them.”  As the epigraph (above) suggests, Bill was not interested in hagiographic renderings of Southern figures.  He was interested in the complexities of Southern people and experience.  In the end, though, there was no doubt where his allegiances lay.  “You strike me as the most unreconstructed of all the Southern novelists I know anything about,” said one interviewer to Bill.  “I consider that just about the greatest compliment anyone could give,” Bill responded.

In 1966, Bill and Joyce moved to New Orleans, where the English Department at Loyola University, housed in a grand Victorian mansion on St. Charles Avenue, offered him a chairmanship.  Joyce earned the M.S. in chemistry from LSU that same year.  By this time, Bill had written four additional books of poetry, the last of which, Lines to the South and Other Poems (1965), benefited from Bukowski’s influence.  Bill’s poetry earned a few favorable reviews but not as much attention as his novels—And Wait for the Night (1964), The Upper Hand (1967), and The Bombardier (1970).  Writing in The Massachusetts Review, Beat poet and critic Josephine Miles approvingly noted two of Bill’s poems from Lines, “Lucifer Means Light” and “Algerien Reveur,” alongside poetry by James Dickey, but her comments were more in passing than in depth.  Dickey himself, it should be noted, admired Bill’s writing, saying, “A more forthright, bold, adventurous writer than John William Corrington would be very hard to find.”

Joyce earned her PhD in chemistry from Tulane in 1968.  Her thesis, which she wrote under the direction of L. C. Cusachs, was titled, “Effects of Neighboring Atoms in Molecular Orbital Theory.”  She began teaching chemistry at Xavier University, and her knowledge of the hard sciences brought about engaging conservations, between her and Bill, about the New Physics.  “Even though Bill only passed high school algebra,” Joyce would later say, “his grounding in Platonic idealism made him more capable of understanding the implications of quantum theory than many with more adequate educations.”

By the mid-70s, Bill had become fascinated by Eric Voeglin.  A German historian, philosopher, and émigré who had fled the Third Reich, Voegelin taught in LSU’s history department and lectured for the Hoover Institution at Stanford University, where he was a Salvatori Fellow.  Voeglin’s philosophy, which drew from Friedrich von Hayek and other conservative thinkers, inspired Bill.  In fact, Voegelin made such a lasting impression that, at the time of Bill’s death, Bill was working on an edition of Voegelin’s The Nature of the Law and Related Legal Writings.  (After Bill’s death, two men—Robert Anthony Pascal and James Lee Babin—finished what Bill had begun.  The completed edition appeared in 1991.)

By 1975, the year he earned his law degree from Tulane, Bill had penned three novels, a short story collection, two editions (anthologies), and four books of poetry.  But his writings earned little money.  He also had become increasingly disenchanted with the political correctness on campus:

By 1972, though I’d become chair of an English department and offered a full professorship, I’d had enough of academia. You may remember that in the late sixties and early seventies, the academic world was hysterically attempting to respond to student thugs who, in their wisdom, claimed that serious subjects seriously taught were “irrelevant.” The Ivy League gutted its curriculum, deans and faculty engaged in “teach-ins,” spouting Marxist-Leninist slogans, and sat quietly watching while half-witted draft-dodgers and degenerates of various sorts held them captive in their offices. Oddly enough, even as this was going on, there was a concerted effort to crush the academic freedom of almost anyone whose opinions differed from that of the mob or their college-administrator accessories. It seemed a good time to get out and leave the classroom to idiots who couldn’t learn and didn’t know better, and imbeciles who couldn’t teach and should have known better.

Bill joined the law firm of Plotkin & Bradley, a small personal injury practice in New Orleans, and continued to publish in such journals as The Sewanee Review and The Southern Review, and in such conservative periodicals as The Intercollegiate Review and Modern Age.  His stories took on a legal bent, peopled as they were with judges and attorneys.  But neither law nor legal fiction brought him fame or fortune.

So he turned to screenplays—and, at last, earned the profits he desired.  Viewers of the recent film I am Legend (2007), starring Will Smith, might be surprised to learn that Bill and Joyce wrote the screenplay for the earlier version, Omega Man (1971), starring Charlton Heston.  And viewers of Battle for the Planet of the Apes (1973) might be surprised to learn that Bill wrote the film’s screenplay while still a law student.  All told, Bill and Joyce wrote five screenplays and one television movie.  Free from the constraints of university bureaucracy, Bill collaborated with Joyce on various television sitcom dramas, including Search for Tomorrow, Another World, Texas, Capitol, One Life to Live, Superior Court, and, most notably, General Hospital.  These ventures gained the favor of Hollywood stars, and Bill and Joyce eventually moved to Malibu.

Whatever his looks, Bill was a stark, provocative, and profoundly sensitive writer.  His impressive oeuvre has yet to receive the critical attention it deserves.  That scholars of conservatism, to say nothing of scholars of Southern literature, have ignored this man is almost inconceivable.  There are no doubt many aspects of Bill’s life and literature left to be discovered.  As Bill’s friend William Mills put it, “I believe there is a critique of modernity throughout [Bill’s] writing that will continue to deserve serious attentiveness and response.”

On Thanksgiving Day, November 24, 1988, Bill suffered a heart attack and died.  He was 56.  His last words, echoing Stonewall Jackson, were, “it’s all right.”

Allen Mendenhall is an LL.M. candidate at Temple University and a Ph.D. student at Auburn University, where he has a family history dating back to the university’s founding.  He lives in Marietta, Georgia, with his wife, Giuliana.