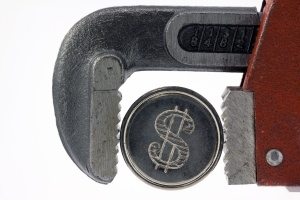 Nothing is quite as boring as reading about a banking crisis, unless it is reading about somebody else’s banking crises. It is hard enough to follow the mind-boggling maneuvers of Wall Street and its complex, ponzi-scheme finance. But when it comes to the banks in Athens, most of us say, “It’s Greek to me.” But we generally assume that the Greeks deserve what they are getting. Besides being Europeans, a category just a cut above being French, with their welfare states and high taxes, they seemed to be overly generous with their government pensions (often starting at age 50—a mere youth by my standards) and have surrendered the economy to the unions and other nefarious interests. And so we treat them like all the other “lesser breeds without the (financial) law.”

Simon Johnson is a man who reads about banking failures for a living, both here and abroad. As an economist with the IMF, it was his job to read about banking failures the world over, and then move in with the IMF’s rather peculiar brand of tough love. And it was very tough indeed, because it was dictated by the so-called “Washington Consensus,” which called for the break up of the offending country’s banks and the removal of their political influence and protection as well as conforming to a strict “free market” regime. The root cause of the failures was a Crony Capitalism that privatized profits and socialized losses, leading to certain collapse.

But when Johnson turned his world banker’s eye on the United States, he found something interesting:

The challenges the United States faces are familiar territory to the people at the IMF. If you hid the name of the country and just showed them the numbers, there is no doubt what old IMF hands would say: nationalize the troubled banks and break them up as necessary.

This “break ’em up” strategy was enthusiastically supported by both the Bush administration and the people who now run the economy in the Obama regime. So you would think that they would apply the same tough lessons to our own economy. You would, of course, be wrong. The failure is bi-partisan; not only did the Reagan and Bush administrations support the tough-love policies, but so did Rubin, who ran the treasury for Clinton, along with Summers and Geithner, who run the world for Obama. But when came to domestic banks, these tough men became rather domesticated.

Professor Johnson (along with James Kwak) has written a book about this crisis, 13 Bankers: The Wall Street Takeover and the Next Financial Meltdown. Johnson also runs an excellent blog of financial commentary, The Baseline Scenario. The authors do an decent job of documenting an industry that had been freed of any meaningful regulation or limitation, and whose outsized rewards went to traders who boasted of “ripping the face” off their customers. Nice fellows, to be sure, but the industry itself was based on engineering financial “products” that had no relationship whatsoever to the productive economy.

There was a near-religious rationale to all of the shenanigans. Regulation, as we all know, was merely a demonic attempt by closet communists to deprive us of our liberties. And the markets, being made of of sophisticated buyers and sellers was self-regulating, so the government could just bug-out. This was an article of religious faith, one which transcended party lines. As Johnson notes:

Defending the huge bonuses in St. Paul’s Cathedral in London in October 2009, Goldman Sachs executive Brian Griffiths went Gordon Gecko one better by invoking Jesus: “The injunction of Jesus to love others as ourselves is a recognition of self-interest…We have to tolerate inequality as a way to achieving greater prosperity and opportunity for all.” Goldman CEO Lloyd Blankfein even claimed to be “doing God’s work” (because the banks raise money for companies who employ people and make things).

Perhaps Jesus should apologize to the money-changers. After all, at least they were dealing in real money, no matter how predatory their exchange rates. But our bankers create money to make “products” that have no meaning in terms of real production. Contrary to Blankfinn’s rationale, the banks became less interested in financing actual production. Lending to an actual productive enterprise is a low-profit business, because it is competitive, and any number of banks are willing to make the same loans. But the creation of financial instruments which were no more than a sophisticated form of gambling, commanded high margins and was a game that could only be played by the big boys. Large banks and large hedge funds became involved in an elaborate Ponzi-scheme in which the banks create money to lend to the hedge funds, which then buy the Ponzi equities from the banks to sell to the soon to be faceless customers.

Of course, at some point there must be at least a tenuous connection to real goods; even the tulip bubble involved real tulips. The tulips in this case were mortgages, credit cards, and commercial properties. All of these could be turned into securities to bank bonds, which then backed CDOs, which were “insured” by CDSs. But there were not enough solvent buyers to pump up these markets, so the banks created the money and lowered the loan standards. Even this did not produce sufficient instruments to satisfy the markets, so they produced “synthetic” versions, which had no actual relation to these markets. So instead of a CDO being backed by real mortgages, they were backed by CDSs which were just bets on the payment rate for a given security. If the rate fell below a certain amount, the seller of the CDS would pay the buyer a certain amount. It was like buying an insurance policy on your neighbor’s home in hopes that it would burn down. If a thousand people do this, and the house does burn down, the insurance company would have to pay 1,000 claims instead of just one. Insurance companies like AIG were willing to do this (at extraordinarily low rates) because even if they did have to pay a 1,000 claims for one fire, they couldn’t imagine more than one fire at a time; they could not foresee the whole neighborhood burning down. (This simplifies the process; the degree of financial engineering (that is, fraud) was staggering. My favorite instrument is the “reverse floater” which caused the bankruptcy of Orange County’s retirement funds. But you get the idea.)

But the very need to make loans of whatever quality practically guaranteed a such a conflagration. As the market deteriorated, the banks lowered their lending standards to get more loans to create more ponzi bonds, a process Johnson calls “force-molting”. The term is from factory farms; when hens slow down egg production, they are starved of food and water to force one final bout of egg laying before they die.

It is really possible that the banks and insurance companies didn’t see the collapse coming? More likely, they didn’t care. The market was so large, the government so captured by the banks, and the banks so critical to the economy that there was an implicit guarantee from the government that the big banks would not be allowed to fail. The six largest banks controlled assets equal to about 60% of GDP (up from less than 20% in 1995). The big banks exercised an economic and political veto. It was a duplicate of the situation in third world dictatorships: political power translated into economic power which translated into further political power. This is the cycle the IMF (at the direction of our Treasury Department) wanted to break.

Johnson’s target is the Too Big To Fail banks, which he says should be nationalized and broken up. The rescue plans have accomplished just the opposite; the big six are bigger than before the crises, having gobbled up their weaker rivals. They now control a bigger share of the economy than before, and they are making the same risky loans that they did before the crises. In other words, the situation is worse than before, not better. And the tepid “reform” does nothing to change the situation, even supposing that the regulators have the knowledge and will to enforce their will on the banks. More likely, we will have the same regulatory capture (where the banks virtually run the agencies that should be regulating them.)

Johnson would have us apply the solution that he himself applied to so many “customers” of the IMF: break ’em up and sell ’em off. And then work to keep them small. The arguments for doing so are sound. Banks, after a certain minimum size, do not get more efficient by becoming larger; they just get more difficult to manage. In economic jargon, they exhibit “constant returns to scale,” meaning that they get the same efficiencies regardless of their size. But size does confer political power. The large banks have implicit and explicit guarantees from the government. This gives them a tremendous competitive advantage, since it lowers their cost of funds. The Big Six can borrow at a rate .78% lower than their smaller rivals (down from .29% in 2000). In other words, the bigger they get, the more advantages they receive and the bigger still they get.

The situation we have now just sets up the next collapse, which will come sooner than we think. And with each successive crises, we become less able to handle the next. Under the Bush-Obama bailouts, the government is on the hook for as much as $23.7 trillion, or 150% of GDP. It is unlikely that we will lose that much, but we could. Liabilities have been socialized, while the profits continue to be privatized. No wonder the banks show little willingness to change. After all, they can make money—lots of money—by ripping the faces off their customers. And if that fails, they can rip the faces off the taxpayer. What is their incentive to change?

Johnson points to the obvious (which is always difficult to see), namely, that the country is formally an oligarchy, with a government of the rich, by the rich, for the rich. Partisan fights are beside the point. As Obama amply demonstrates, “change” means more of the same, for the same people fund both sides. As entertaining as our political process is, it is meaningless, full of the sound and the fury, no doubt, but signifying nothing. The real power lay elsewhere. The president and the congress seek office to run the country, only to find that the country runs them. Or rather that part of the country in and around Wall Street.

We are now in a trap from which we cannot escape. As Nouriel Roubini notes, the transferring of private liabilities to the public balance sheet has meant high government debts. To pay the debts, there will have to be higher taxes and/or lower government expenditures. But the government has been, for that last 60 years, since a large part of the economy that lower expenditures (or higher taxes) would lower output and make it impossible to pay off the debt. There is no way out, this side of collapse. The situation is worse in countries like the United States that have dismantled so much of their productive capabilities. Because in the end, countries get prosperous by making things. It is in the fields, farms, factories, fisheries, and mines that wealth is first created, and the rest of us must eat what they produce, must wear what they make. This is where our efforts to rebuild the economy must focus, and hence this is what finance must support, and if it doesn’t support these things, then it can only be a destroyer of the economy, however much it may benefit the bankers and politicians. We can get along without synthetic CDOs, but we do need to eat.