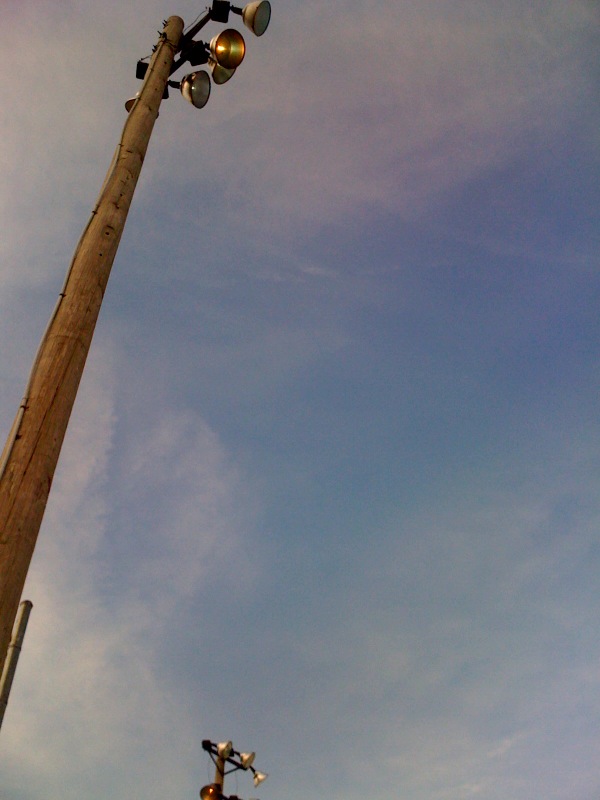 JEFFERSON COUNTY, KS. Last night there was a crackle of excitement as the crowd quieted in the perfect solstice air while the two best teams in the 10-year-old division got set to square off for Jefferson County Little League glory, circa 2010.

My own rooting interest, the Jefferson West Tiger’s left fielder, decked out in his red and black, was nearly Rockwellian in his pregame thrill with the bouncing outfield turf, leather mitt in the perfect infield dirt, and tossing the ball around in warm-up.  The purple and white McLouth Bulldogs glowered from the visitors’ dugout like some shrunken version of Murderer’s Row.

O to be a boy again on a baseball diamond!

And then a matronly figure hustles onto the field, calls the coaches over and they huddle around a little black device as she points to its digital display.  With ruthless female efficiency the field is soon cleared.  I lean into the dugout for the following exchange:

“I know.  But the lightning monitor says there’s lightning in the area.  We’re on delay ‘till it clears us to play.”

“Unbelievable!  Are we sure it’s not just picking up on the electric excitement coming from the crowd?  Even a flatworm with nothing but an eye spot could see that it’s blue sky from end to end!”

“Trying telling that to her,” says Coach with a jerk of the thumb.

It strikes me as bizarre how demure and passive this crowd is and these coaches are in accepting the judgment passed upon us all from a little black box.  What a trifling thing it is to control man!  How easily we believe in fairy tales when they come cloaked in the black box of authority and superior knowledge.  And the digital readout is only the latest version of the king’s sword.  In contrast to the sunny sky, my inner weather darkens and I think that here are people not yet ready to confront and resist the stifling and deadly black boxes of arbitrary authority pronouncing their judgments from Topeka or Washington D.C.

Thirty minutes later the Lightning Priestess announces that she has once again consulted the Oracle and the Oracle has remembered us and has looked upon us with favor.  Cheers rise from the audience, and then the sacred call: “Play ball!!”  Yet somehow the great mystery of the Diamond is cheapened, the stature of its guardians in blue diminished just so slightly, its ritual calls and responses tainted.  The Weather Oracle presides over all now, and furtive glances toward its Priestess occur throughout the game.  “O all-knowing and all-seeing digital readout, continue to grant us the ‘All Clear’” the silent prayers rise from the bleachers.

Yet the night is not over.  Though the weakened spirit of the old may be lost, the heart of a boy may still be gained.  For while the New Religion of the Digital Display has muscle, the Old Faith of the Diamond has magic.

The game is back and forth with brilliant plays and staggering blunders until at the conclusion of the standard five innings, the score is still knotted up.  My rooting interest trots out to left field for the top of the extra frame.  The Bulldogs quickly take a two run lead until my rooting interest makes a crucial play on a screamer to left field to stop the bleeding.  Bottom of the sixth, home team down by two.  With a runner on third, rooting interest is at the plate.  He brings in the first run of the rally with a sacrifice and returns to a dugout hopping with cheers and high-fives, a sea of red and black and smiles.  Three batters later, with two runners on, our slugger knocks one over the head of the outfielders.

How I Ended my 6-Year Relationship with my Blackberry