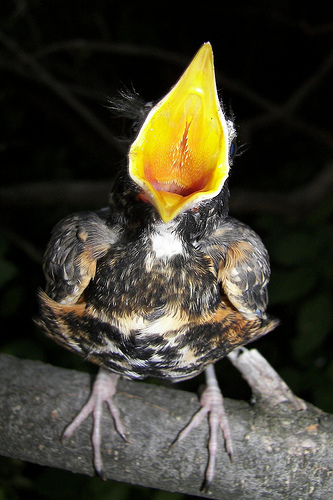 Kearneysville, WV. Last evening as we were eating dinner out on the deck, a fledgling robin fluttered into the fir tree and sat bobbing on a tiny branch. His chest was not yet the brick red of a mature robin. He was slim and patches of gray juvenile down gave him a mottled appearance. One of my boys wondered aloud what all of us were thinking: “I wonder if that’s Jayber’s son.” Jayber was our robin.

Last summer, in the heat of mid-July, a thunderstorm rolled through our parts. There was plenty of wind and some rain. Like summer storms often do, this one blew by quickly and left the world steaming as the sun broke through the dissipating clouds. The boys headed out to play. Soon they made a discovery. A tiny bird was dead under the fir tree. Its pink body mostly naked, its thin neck outstretched, motionless. Only a few feet away was another, no doubt both blown from the same nest. This one was not quite dead. At regular intervals it raised its over-sized head on its wobbly neck and opened its yellow beak, eyes closed, as if demanding food or silently singing its grief.

We carefully scooped him up and put him in a shoebox. He became weaker by the minute. By the time we tried to give him some water with an eyedropper, I had to pry his beak open to get him to take it, but only a few drops perked the little guy right up. We set about digging worms in the garden, cutting them in small pieces, and feeding him with tweezers. It took him a while to get the hang of it, but once he figured out what was happening, he gobbled up the worm bits like a champ. A bit of research on the internet led us to a food source that didn’t require hacking up worms. It turns out that if you soak dry dog food it turns into a mushy gruel that can sustain robins as well as Rottweilers.

The boys called him Jayber, an odd name for a robin, but they’ve heard me talk about Wendell Berry’s novel, Jayber Crow, and I guess it seemed like a good name for this bald, homeless bird. Little did they know that the character in the novel was also a balding orphan in search of a home.

For a few days, it was not clear that Jayber would survive, but he turned out to be a bird of some pluck. As the days passed he grew, his feathers began to come in, and he become increasingly mobile. The shoebox kept him contained for a time, but eventually he managed to get to the rim and he was soon attempting to explore the house. We graduated to a larger box, fully three feet deep, complete with branches for perching and a lid for closing. We shut him up at night, and as long as it was dark, he stayed quiet. The least amount of light or noise would set him to chirruping.

As he grew, we expanded his diet. The boys caught crickets, removed the legs (I guess they were concerned that the legs would impede the process) and held them above Jayber’s beak. He gamely opened up and with some work managed to get them down. My wife thought he might enjoy a blueberry chaser, but the berry got stuck. For a minute we feared our little friend would expire with a blueberry lodged in his throat, but after some effort and creative body English, he managed to cough it up.

As it turned out, the blueberry was only Jayber’s first, and mildest, brush with tragedy. Although he wasn’t a cat, he seemed to have nearly as many lives.

One evening, while one of my sons was in the shower, Jayber, who was perched on the edge of his box in the bathroom, launched himself in a feeble attempt to fly. For some unknown reason, he aimed straight for the toilet. The lid, as luck would have it, was up and Jayber went down. Fortunately, my son heard the ruckus and managed to pull the soaked bird out before any damage was done.

A few days later, my wife had the bird in the yard. She was trying to get him accustomed to the outdoors, enjoy the sunshine, and work on his still nascent flight skills. She turned her back only briefly but in that space of time, two things happened: Jayber managed to get some distance away from her and someone let our little white dog (a Bichon Frise if you must know) out the back door. The dog, for some reason, fancies himself a killer. When he caught sight of Jayber in the grass he took after him with all the gusto of his lupine ancestors. Well, the dog is not big or terribly bright but he is fast. My wife screamed and took after the dog, who was hard after the bird, who realizing his peril, was sprinting toward the nearest tree. Fortunately, my wife is fast. She managed to grab the Bichon just as he got to the robin. Jayber lost some tail feathers but he survived the little white dog.

The next brush with death was by far the most dramatic, one deserving of a write-up in Readers Digest or a Hallmark movie. One Saturday afternoon, the whole family was working in the garden. Someone had brought Jayber out with us (the dog remained inside). Beside our garden, for a reason not known to me, is a four inch diameter PVC pipe buried vertically so that only an inch or so is above the ground. My wife looked up from pulling weeds only to see our juvenile robin hop once, twice, and then disappear down the pipe. For a harrowing hour we struggled to get that bird out. The pipe was fully seven feet deep and muddy at the bottom. We first attempted to lower a wire with a bend at the bottom for the bird to grasp, but he couldn’t hang on. We then wrapped the hook with a rag and duct tape. He held on better and twice I nearly got him to the surface before he started fluttering and fell back to the bottom. At each attempt he was obviously weaker and his chirrups were became more feeble. The sun was hot, my temper got short, children were crying. My wife (she’s not only fast but she’s clever like MacGyver) finally rigged a long piece of wood with a wire ring at the bottom. She fitted the ring with a net, like on a basketball hoop only with no opening in the bottom. We worked this down the hole and under the bird and slowly lifted him out of the muddy depths. Cheers! Hugs! More tears! A bedraggled robin in need of a bath. Cue the music. Role the credits.

It soon became clear that Jayber needed to return to the wild. My wife found a place that rescues wild animals. She and the boys took him in. The lady (who, I was later told, looked and acted like a bird) promised to do her best to hook him up with a group of wild robins. She insisted, though, that Jayber didn’t know he was a robin. The bird-lady put a mirror in his cage and he eyed the stranger in the glass with curiosity and a little suspicion. The boys said their goodbyes, and Jayber was gone from our lives.

We missed the little guy who had been such a central part of our lives and concern for two weeks. So last night when the robin graced our dinner with his visit, we all thought of Jayber and wondered if, just maybe, he had returned to our yard to raise his own family. Probably not, but I hope he did.