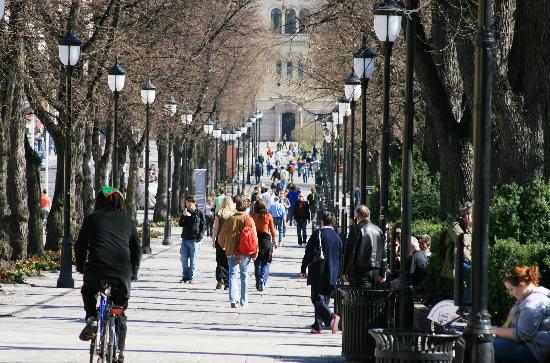 Philadelphia, Pa.My wife and I no longer own (better – make loan payments) on a car. I would like to claim that an auto-less existence results from a principled stand against fossil fuels. As guilty as I am (a la Wendell Berry) for soiling the planet with carbon emissions and as much as I would like to restore my innocence, the decision to abandon a car has more to do with being downsized than with ideas and their consequences.

To adjust to economic realities, my wife and I also moved from the leafy neighborhood of Chestnut Hill into Center City, Philadelphia. Urban centers, especially in the Northeast, are the rare places that make life possible without a car. I have agrarian friends in rural Virginia who need to drive their pick-up trucks at least a mile just to pick up the mail. In Philadelphia, car rentals are possible by the hour. But the city’s public transportation system is very good even if quirky and still in need of some upgrades. And if residents are willing to use their solar-powered bodies to make up the difference between the buildings they want to enter and the nearest train or subway station, they can – with the help of SEPTA – go almost anywhere in the Delaware Valley.

So instead of driving, my wife and I walk – a lot. I even walk to purchase beer, which is something of a nuisance in Pennsylvania where cases are much cheaper (per bottle) than six-packs from the local package store. The Pennsylvania Liquor Control Board – a Prohibition-Era agency – still controls the sale and distribution of wine and hard liquor. Beer distributors sell cases. Bars and some delicatessens sell six packs. This means I need to walk a little more than a mile each way to buy a case from one of the city’s very good micro-breweries. (The Hart favorite these days is Yard’s IPA.) But a two-wheeled shopping cart makes this a fairly easy outing as long as the weather cooperates.

Less cooperative are the automobiles that cities allow us to give up. Sidewalks are increasingly crowded with hot dog and newspaper vendors, as well as restaurants that turn open sidewalks into outdoor cafes. Sidewalks also become the favorite site for renovation and construction projects. In all of these cases, city officials would never countenance taking away a lane of traffic. Instead, they pass the pain along to pedestrians. In our section of downtown Philadelphia, we needed to cross the street twice to avoid construction projects on either approach to our high-rise building.

When you consider the number of pedestrians competing for sidewalk space compared to the number of car occupants, the fight seems rigged. The average sidewalk is ten feet wide. That means that roughly four people – more likely three of polite dispositions — can pass comfortably. The average two-lane street is seventeen feet wide. At best, the average car is carrying two occupants. Which means that about the same number (four) of car occupants as pedestrians may pass safely down a space almost twice as large as the sidewalk. On our street in Philadelphia, not one of the busiest for traffic, the pedestrians are likely four times the number of car occupants on the average block. That means that people in cars take up a disproportionate amount of space. Does this give me license to hate car drivers? I know what Jesus would do: hate the car, love the car driver.

One of my favorite authors shared these sentiments when he lived in Center City and fought proposed jaywalking legislation. That man is J. Gresham Machen who moved to Philadelphia in 1929 from Princeton to start a seminary that would rival the Presbyterian one in Princeton that he suspected was guilty of bad Calvinism (yes, there is a good variety). Machen enjoyed walking, and was especially fond of reading pocket-sized editions of the Loeb Classics while he walked to and from class. The thought of having to wait for cars was anathema.

He also had a point when he wrote a letter to one of the city newspapers – he also testified before city council – about the mind set of city planners who were opening up Philadelphia to automobiles and their drivers.

. . . I am dead opposed to subjecting a whole city because of the comparatively few incautious people to a treadmill regime like that which prevails in Western cities. I resent such a regime for myself. I have tried it, and I know that it prevent me from the best, and simplest pleasure that a man can have, which is walking. But I resent it particularly because it is a discrimination against the poor and in favor of the rich.

That brings us to the real purpose of these laws, which is not that pedestrians should be spared injury but that motorists should be spared a little inconvenience. I drive a car from the driver’s point of view. I know how trifling is the inconvenience which is saved thus at the expense of the liberty of the poorer people in the community. Indeed, I do not believe that in the long run it is for the benefit even of the motorist. I think it is a dreadful thing to encourage in the motorist’s mind, as these laws unquestionably do, the notion that he is running on something like a railroad track cleared for his special benefit.

I am prone to similar resentments when I see the way that business owners, city officials, policies, and laws give more consideration to drivers than pedestrians. (Pedestrians themselves are not blameless when it comes to provoking frustration in other pedestrians – a subject for another post.) None of this is so bad that I’d prefer to live somewhere else. The advantages of living without a car are greater than the annoyance of negotiating their presence. But cities would be grand if city governments prohibited cars.

Then again, I would be glad to make room for a car like this.

The Cake of Many Layers: Walking a City through Time

From the Fire back into the Pan