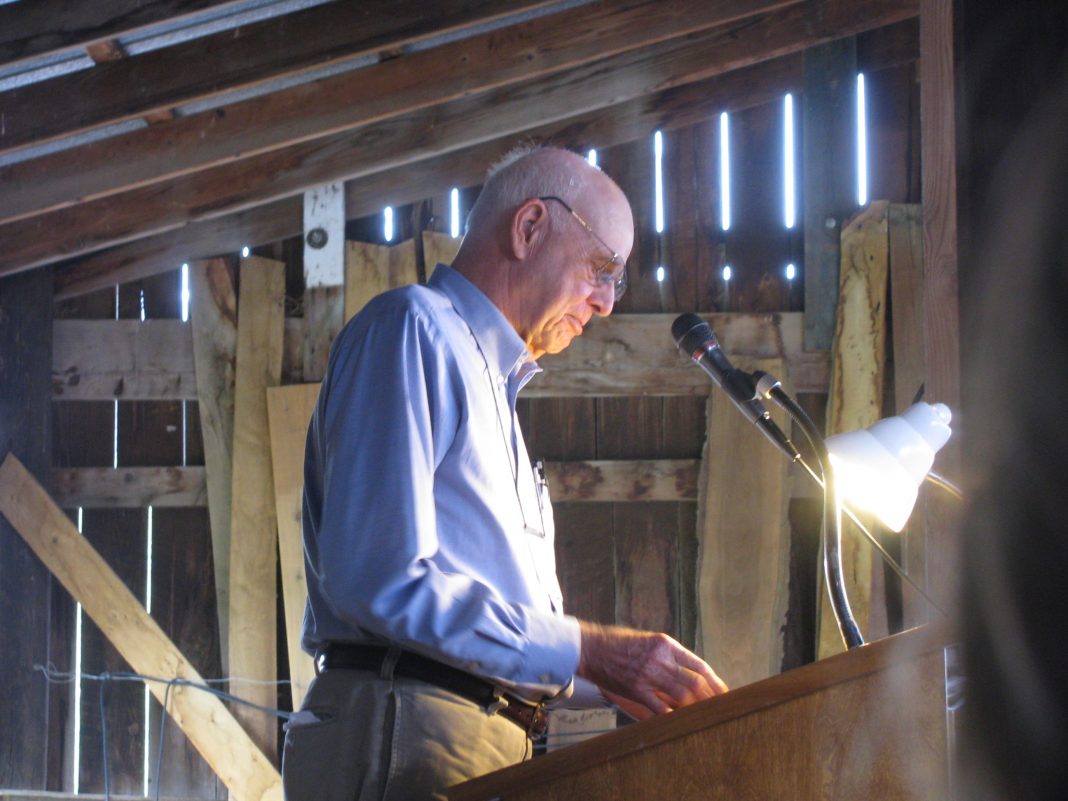 There are some folks here at Front Porch Republic who are well-acquainted with Wendell Berry. They’ve been to his home, stayed up late telling jokes with him, discussed profound ideas in his presence, really gotten to know the man. I’m not one of them. My encounters with Berry have been entirely through his written works–until Saturday. That morning, I drove to Salina, KS, to attend The Land Institute‘s annual Prairie Festival, where Berry would be speaking. It was as crowded as the festival has ever been, but I managed to squeeze in close, so as to hear what Berry had to say. I never got to speak with him directly; there were too many others around him, all of whom knew him better than I. But still, I managed to draw near and sit before (well, on a folding chair) a teacher whom I respect enormously. He taught, and I learned.

The occasion for Berry’s presentation was the inauguration of a new lecture series at The Land Institute, a series focusing on “Restoration and Conservation,” named in honor of Strachan Donnelley, a businessman, philanthropist, and conservationist who had founded the Center for Humans and Nature in Chicago. Berry, for his part, paid tribute to Donnelly by speaking entirely about that: the relationship of humans and nature–or better, of humans in nature, or of nature. Berry has never been, despite his long-standing support for many environmentalist or “green” arguments, an entirely comfortable fellow-traveler with environmentalism, at least not as a doctrinaire ideology; he’s too much of a community-builder, and too much a believer in the virtues of husbandry, to starkly oppose human development in favor of the preservation of wildness, which is what too much environmental thought too often unfortunately falls into. But if one carries environmentalism beyond favored species, and includes within it the whole “biotic community” (or, as Aldo Leopold put, the “Land Community”), meaning the whole ecosystem which always begins with and returns to the fecundity and renewability of topsoil and the land generally, then speaking of humans as an essential component of the “environment” makes good sense.

But even there, still, one must be careful. Berry didn’t want to talk about “the environment,” though he mentioned it; he wanted to talk about the natural environment of Kentucky, the place he’s knows best. He apologized for that to his mostly Kansas audience, but also defended his choice: it is our “duty,” he claimed, to love our own states and places better than all others, but also to recognize that all others feel the same duty, and act accordingly. For him, this duty included giving due consideration to a book which he lovingly described and criticized for us: Kentucky’s Natural Heritage, a book which he described as ambitiously, and wisely, attempting to tell a story of history and biodiversity at the same time. I have no idea if his belief that this book was “the first of its kind” is at all accurate, but the way he then related to us, over a period of 40 minutes, a “land-based” history of Kentucky–in which European and early American settlement, political and economic development, and government policies, were joined with discussions of waterways, the introduction and extinction of flora and fauna, and most particularly the devastation wrought my mountaintop-removal mining–was compelling enough to make me wish I could read a similar treatment of Kansas. (Or perhaps I have just such a book sitting on my shelf right now, waiting to be read…).

Berry’s essential theme, or at least the theme which most essentially struck me, was one of knowledge. For example, Berry wanted to know why the black willows of Kentucky’s river bottoms have been rapidly disappearing, and pointed out the terrible consequences–for soil erosion, for the health of river ecosystems–of both their disappearance, and of the fact that for so long no one was noticing they were disappearing. Why did so few attend to this ecological transformation? Berry didn’t say…but he did make another comment from which one could easily discern his reasoning. He talked about independent, small- and mid-scale farmers as necessarily committed to the conservation of the natural environment, because without a well-functioning biotic community–and here he also spoke of it as “the community of creatures, living and dead,” which is profoundly meaningful in both a spiritual and scientific sense–their vocations would be at an end. But when said vocations are co-opted by industrial agriculture, by the mantra of “get big or get out,” with resulting consequences for land prices and the centralization of economic opportunities in cities, the result is an intensely conservative practice which finds its number of practitioners, and their wealth, rapidly shrinking. And in this case, Berry is nothing but a realist: “a minimal farming population, minimally paid, cannot be expected to be conservationists.”

So how does that apply to black willows, or any other problem of knowledge regarding our disparate natural communities? Well, because–as Berry noted–the local knowledge imparted by their presence (or absence) was mostly the province of dedicated stream fishermen, the question becomes one of the conservation of their place in the ecosystem. And on that task Kentucky is failing; there are too few such fishermen left today, and those small numbers, working in restricted environments mostly overwhelmed by corporate pollutants or the tourist industry, haven’t nearly the ability to play a “natural” role in observing what was going on around them. Thus does the human participant in the biotic community become removed from an effective, balancing, contributing role in it, with harms which result in exactly the same way that removing streams or species or whole hilltops (Berry referred to this horrible approach to mining as “original sin, round two”) from the ecosystem may similarly harm all that remain.

I wonder how others would respond to Berry’s approach to “knowledge,” and the role which he believes local human knowledge can play, should play, but often doesn’t play, in keeping the land community (which is all of us, in our respective places) healthy. On the one hand, Berry treats knowledge as something best recognized as limited, beyond our grasp, and therefore humbling: we should approach our ecosystem with a sense of our ignorance, and therefore approach cautiously most scientific, technological, or economic enterprises as a result. But on the other hand, it is, in fact, “knowledge” in the most common-sensical use of the term, that he speaks of: we have a need to know–to have real practical knowledge–about the soil, about the black willows, about all that begins with the solar power which is embedded through photosynthesis and decay in that which grows in the soil and that we thus consume. To treat that knowledge casually, or less than holistically, is a sin against the natural world. Yet it seems to me that a student of F.A. Hayek, or many other apostles of the unregulated market (including, to a limited degree, Adam Smith himself), would on the contrary argue that the knowledge which Berry speaks of isn’t real, or isn’t relevant, or isn’t obtainable–not in the way he speaks of it, anyway. We can’t know the actual “value” of the soil, or the black willow, or the mountaintop; we can only know (and this only indirectly, through the repeated operations of selling and buying) the flexible price of these goods, and thus their relative (and mostly after-the-fact) value to other operations (commercial fishing, riverside property development, coal production, “environmental” tourism, etc.). Ignorance, in this sense, isn’t humbling, it is empowering: see how much we can do, even given all we don’t know! There is no, or at least not very much, sustainability implied in such a model; it means something can be used up (and perhaps regretted, or expensively repaired later), because there is always something more–more oil, more energy, more willow trees, more land. Berry spoke of how used up Kentucky’s biodiversity had become, and that while there is reason for hope–another lesson of the soil, which receives the seeds and gives them life, year after year: there is always hope–there is also much, much terrible work to be taken up by those who care about the damage which our willingness to allow economies to develop absent sufficient natural knowledge (and a humbling ignorance of such) has wrought.

Berry, like The Land Institute generally, thinks in terms of limits, and the need to know, value, and sustain the natural places we inhabit–including all those things we don’t know about those places. This is a worldview that gets little hearing when the economic infrastructure is attuned entirely to growth, development, innovation, and “creative” destruction. Not much value placed is placed upon carefully tending to, exploring, being humbled by, and getting to know the natural history of a place. That, at least, I know from experience; teaching Wendell Berry, and his notions of limits, is no easy task. But before learning comes hearing, and I and several hundred others were able to hear him–this cranky, funny, insightful, stern, Kentucky prophet–on Saturday, and we’re better for it. He’s an old man now, but still at it, for which we should all be grateful. The more people hear him, the more hope for the local places and global health there will be.