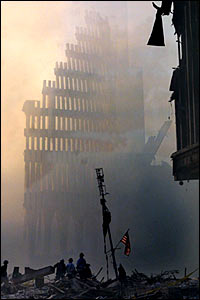 When I woke up the morning of September 12, 2001 I did so under the assumption that the previous day’s events were now part of the landscape of American life. Like the Israelis, we would have to learn to deal with terrorist attacks as a permanent feature of our politics. This would mean greater security and greater restrictions on our liberties, but it would also mean that American optimism would be unalterably tempered by the persistence of tragedy in our midst.

Furthermore, it seemed to me that the thousand-year fraternal battle within Islam had now drawn the West permanently into its orbit; and, given the West’s own imperialist reach, the clash was certain to be long and bloody, and that America would be fighting this battle largely on its own.

Nine years later, I am amazed that we haven’t had further terrorist attacks on the homeland. This is not for lack of effort on the part of the terrorists. I spent some time in 2008 with the then Deputy Attorney General of the United States who told me in hair-raising detail some of the plans his office was tracking and foiling on a daily basis. If we take it to be the case that one of the fundamental responsibilities of government is to provide security for its citizens, I have to say I think they’ve done a pretty admirable job.

Things don’t end there however. We know that Osama bin Laden considers all Americans, children included, to be legitimate targets of violence. We know that he considers such targeting to be just recompense for the suffering America has visited upon the Muslim lands. We know that he holds America and Israel singularly responsible for this suffering (making explicit mention of the fact that al Qaeda has no interest in Sweden). I see no reason to accuse him of bad faith on these issues; that is to say, I believe he believes what he says.

For we Americans this raises at least two questions. First, is there any legitimacy to his complaints? To raise this question is to invite heated rejoinders, for Americans do not respond at all well to the idea that the terrorist attacks of 9/11 might be warranted, but not justified. I’ll say more about this in a moment.

The second question is in a sense far simpler and more practical: is being an American worth the implicit death threat under which you place yourself, your spouse, and your children? As a parent, and as someone married to a Canadian and thus possessing a citizenship option I could easily exercise, this question seems to me not just an abstract one. Is being an American worth taking such a chance? Which, of course, raises the question of what, exactly, it means to be an American.

The questions are in part answered by reference to America’s self-understanding as derived from the Puritan settlements. Sacvan Bercovitch has contributed the important argument that the jeremiad forms an essential part of America’s justification of itself both to itself and to the world at large, for America is uniquely concerned about the idea that its existence has some sort of transcendent purpose. The jeremiad was a public acknowledgement of America’s special place as God’s chosen people, but also a way of reorienting the community so that it could fulfill its promise. God punishes those he loves, especially when they stray, and uses punishment as a way of reminding them of their dependence on divine favor. As a result, the communities can reorganize themselves according to the dictates of divine command.

The divine punishment can manifest itself in many ways: natural disasters, disease, or through the violence of a scourge. The latter, a cat o’ nine tails, could also be metaphorically any agent which expresses divine ends through evil means. Not of God, they serve God’s purposes. Attila the Hun was so considered, the whip by which God punished and called his people to repentance.

Lincoln explicitly referred to the war as a scourge by which God was punishing the nation for the sin of slavery, and also by which it was being called to fulfill the vision of being an “almost chosen people.” The jeremiad, as Bercovitch points out, is an affirmation of the “ultimate success” of the political community. “The purpose of their jeremiads,” he wrote, “was to direct an imperiled people of God toward the fulfillment of their destiny, to guide them individually toward salvation, and collectively toward the American city of God.”

In a secular age, thinking of the events of 9/11 in the context of the Jeremiad is not an unacceptable option. Responses range from self-loathing to self-congratulation (“They hate us for our freedom”). Inadmissible are serious attempts to understand bin Laden’s claims, or to think about the events in terms of America’s self-understanding as a convenantal people. For, admit it or not, America, like all nations, stands under the authority of divine law, and its history unfolds under the watchful eye of Divine Providence. So believed many of our religious and political leaders in the past.

When studying American history one has to resist the temptation to treat the Puritans or thinkers such as Lincoln as if they were delusional, or simply victims of the “universal neurosis” that is religion. We are likely to say “They thought they were God’s chosen people” not realizing that they may have, in fact, been God’s chosen people. If we accept the claims that there is a God, that this God is powerful, that this God can enter time and present himself in human form, that this God has an interest in human affairs, and that this God is both judging and merciful, then we are brought to the point of thinking about how God works in time, and through what agents, and that the events of 9/11 or Hurricane Katrina may have been recondite punishment for collective sins.

What sins might we have committed? Here we are brought face to face with the unpleasant realities of America’s imperial reach and ambitions. We consider the unraveling of American democracy at home as we increasingly inhabit a culture that takes libidinous satisfaction to be the summum bonum. We consider the exporting of the meanest and basest expressions of our collective creativity in film and television. We consider our consumption of other nation’s resources, and the military establishment required to sustain this standard of living. We consider the complications our reflexive support of Israel creates throughout the Middle East.

Within the immediate shock of the terrorist attacks such considerations were rightly inadmissible. Nine years on, we ought to be able to face these questions squarely, and to consider why plots continue to have to be foiled every day. I’m not naïve enough to believe that if we just left others alone they’d leave us alone. I also believe that our well-intentioned philanthropy can create resentment and anger. Nor do I believe that the world would be better off without American military power in it. But such power can only be intelligently defended if it is related directly to a proper and well-judged sense of purpose.

The theologian Stanley Hauerwas once said that dying for the United States of America was like dying for the phone company. If America is little more than an administrative state, then there can be no compelling reason to continue to risk our lives and fortunes, and that of our children, in the face of continued plotting. I remain convinced that we haven’t seen the last attack.

So the question of 9/11 remains: what does it mean to be an American? What makes it worthy of the sorts of sacrifices now expected of us (for, despite the rhetoric of our political parties, sacrifices there will surely be). Where is our Lincoln, who with soaring rhetoric can articulate this sense of collective identity and purpose? We know that neither George W. Bush nor Barack Obama’s are the chosen ones in this regard.

Nor am I. Maintaining my citizenship in America is only tacit acknowledgment that it’s worth the risk. The articulation of a healthy patriotism that takes seriously the sense of limits and place seems to me one of the most important functions of the Porch. It is a patriotism grounded in the virtue of gratitude, which recognizes the efforts of those who risked their lives and fortunes so their posterity might enjoy the bounties of freedom. This gratitude extends to the remarkable durability of the American Constitutional system which has provided for high levels of political stability, freedom, and material abundance.

At the same time, taking seriously the unity of the virtues, this patriotism must combine gratitude with temperance, justice, humility, and modesty. It must acknowledge that a God who blesses is also a God who judges and chastises. If the events of 9/11 are to be meaningful, they will be so if they move us as a political community to a greater recognition of our dependence on and subordination to the laws of a God whose very being transcends the comings and goings of empire. Osama bin Laden with his religious language seems to get that. I’m not sure a secular state has the resources or the stomach to fight the battles that lie ahead. Only if it draws our attention back to the spiritual resources which ground our politics and creates a virtuous patriotism will 9/11 achieve its purpose.