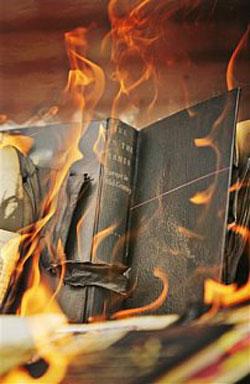 The Rev. Terry Jones has caused quite a stir. For the past week he and his tiny Pentecostal church in Florida have broadcast plans to burn copies of the Qur’an on the ninth anniversary of 9-11. Copies of the Qur’an have been mailed to the church by sympathizers around the country. According to Jones, he and his church are simply doing what God has instructed them to do. A direct message from God is, to be sure, a compelling reason to obey. Yet, Jones is open to God changing His mind, and as matters stand now, the reverend appears willing to call off the bonfire if he can meet with the people pushing for the so-called “Ground-Zero Mosque” in New York City.

U.S. leaders including President Obama, Secretary of State Clinton, and Secretary of Defense Gates have all weighed in warning that proceeding with the event could bring grave harm to Americans in Muslim countries. Indeed, while not one Qur’an has been burned there have already been street demonstrations in Afghanistan and dire warnings from Muslims elsewhere. Says one Muslim leader in Indonesia, this act would be a declaration of war. Another remarked that the U.S. government would be culpable if the event was allowed to take place. Clearly he doesn’t appreciate the nuances of the First Amendment.

On one hand, Jones might be construed as a throwback to an earlier time, a sort of Old Testament prophet, moved by the voice of Jehovah, brandishing the sword of righteousness, and destroying idols of Ba’al and any other affront to God. A good number of Muslims should at the very least sympathize with such a figure. After all, the violent protests over the Danish newspaper that published Kurt Westergaard’s cartoons depicting Mohammed were motivated by the same religious zeal. So too, the death threats and murder attempts suffered by Westergaard in the wake of his blasphemy. Fear of violent reprisals prompted Yale University Press to refuse to reproduce Westergaard’s cartoons in a book on the topic (leaving an obvious gap in the story). The Taliban expressed the same impulse when in 2001 they summarily destroyed ancient Buddhist statues ignoring cries of protest from the international community.

So the zealous piety of Jones might be born of the same impulse that motivates Muslims to protest, defend, and revenge desecrations of their holy book and its prophet. There is, of course, one obvious difference, a difference that is too important to ignore: Jones is threatening to burn a book. Those begging him to reconsider are not afraid that angry Muslims will burn a pile of Bibles in retaliation. Rather, they warn (and Muslims themselves validate the warnings) that violence will ensue. That people will be killed.

There is, of course, another possibility. Jones may be attempting to make a point or even seeking his own fifteen minutes of fame. In sponsoring a “Burn a Qur’an Day” he has surely found the latter. It is less clear what point he is trying to make; although, there are important questions raised by his plan and the responses that plan has elicited.

In the wake of the attacks of 9-11, George W. Bush told the country that Islam means peace. He was wrong. Islam means submission. But setting aside that gross bit of misinformation posing as a civics lesson, there is an obvious question: is Islam a peaceful religion? Much turns on the answer to this question. For if Islam is in its essence a religion of peace, we should expect to see Muslims around the world expressing their disdain for violence even as they express reverence for their holy book and the prophet. On the other hand, if the vast majority of Muslims condone the violence or even fail to object to it, we are justified in concluding that Islam is only a religion of peace when it enjoys exclusivity, which is to say, when there are no infidels to terrify or kill.

It might be objected that Christians have, in the name of Christianity, committed their share of atrocities. This cannot be denied. However, the great majority of Christians today would argue that such acts were committed in violation of the commands of Christ and therefore represent a perversion of the teachings of Christianity rather than a logical outgrowth of it. Would a majority of Muslims make the same claim about Muslim-induced violence?

There are, no doubt, Christians who are quietly cheering the actions of Rev. Jones and who hope he follows through with his bonfire. Yet few if any churches are making moves to imitate Jones and his church. Why? We must conclude that either 1) there are Christians who would like to hold their own Qur’an burning event but are afraid, or 2) the vast number of American Christians are apathetic about truth and just want to get along, or 3) that the vast number of Christians embrace principles that forbid them from imitating Rev. Jones even though they agree that Islam is not the true religion. The first is the product of cowardice and the second of unseriousness. The third option, however, suggests that strong religious disagreement is possible without aggressively seeking to offend or insult those with whom one disagrees. It suggests that loving one’s neighbor includes treating him with respect and seeking to persuade rather than humiliate or enrage.

Let’s reverse the situation for a minute. Imagine that an obscure Imam in Kuwait decided to burn a pile of Bibles to commemorate the end of Ramadan. What would happen? If—and this is a big if—the story was even considered newsworthy by the western press, a couple of religious leaders might be interviewed. They would express their disagreement with the Imam and shake their heads sadly. Some commentor might remark on the freedom of all people to express their beliefs even if they are unpopular. Nothing more would be done. No protests. No rioting. No death or even the threat thereof.

It’s not difficult to imagine how this tepid, even pathetic, response might be construed as weakness by those who were not raised to believe that the freedom of expression is somehow a right enjoyed by all human beings by simple virtue of their humanity. It’s not difficult to imagine observers who conclude that what appears to be apathy indicates a vacuum at the core of western religious belief.

It may be true that much of the west is currently mired in a slough of religious indifference that manifests itself in frenzied consumerism, hedonism, and patent irreverence. To the extent this is true, the zealous Muslim observer scores a valid point against the west. I recall walking down Bourbon Street in New Orleans two weeks after September 11, 2001. It was nearing midnight on a Saturday evening. Despite the recent national trauma, things were cooking in the French Quarter. An atmosphere of unrestrained hedonism permeated the crowd, loud jazz music provided the ubiquitous score, and neon signs advertising live sex acts flashed above dim entryways standing like portals to another world. As I walked down the street it occurred to me that if Muslims in the Middle East think this is an accurate depiction of America, well, no wonder they want to bring us down.

On the other hand, the American response to a Muslim cleric burning Bibles might indicate an important fact about Christianity and about the American Constitutional order. Christ taught his disciples to turn the other cheek. To love their enemies. To pray for those who persecute them. Christianity at its best is a religion dedicated to loving God and loving one’s neighbor. Thus, the proper Christian response to the Bible burning Imam is to pray for him. To pray as Christ did while on the cross: “Father forgive them.” Peaceful persuasion rooted in prayer and characterized by love is the Christian ideal. Protests and violence (or the threat thereof) is not in keeping with the Christian faith; although, plenty of Christians have veered down that road to the detriment of the very faith they claim.

The American Constitutional order is one historically rooted in the Christian faith but separated from any established national church. In that sense, the American Constitutional order is secular in form but an outgrowth of a culture permeated by assumptions about human nature and moral truths born of Christianity. As a result, we enjoy a political sphere that can be influenced by the religious sphere while at the same time citizens are free to worship as they please and the state has no say over the content of religious beliefs. This distinction helps to foster the possibility of religious pluralism whereby individuals of differing faiths learn to co-exist while remaining steadfast in their religious commitments.

There are no Muslim states that effect the separation of the state and the church save Turkey, an experiment imposed in the early twentieth-century by a strong ruler who was attempting to help Turkey become a modern nation. While Turkey certainly provides some evidence in support of the hope that Muslim nations can establish political institutions that are formally separated from the dominant religious institutions, the jury is still out and recent trends suggest a resurgence of Islamicist control. So the question remains: can Islam exist as a majority religion in a nation committed to religious pluralism and freedom of expression? This is one of the great questions of our time.

On this anniversary of the 9-11 attacks—attacks that killed not only Christians but Jews and Muslims as well—men and women of good will and of every faith can recommit themselves to peace. To prayer. To good works born of love. And to using the gift of language to champion truth. For the ability to communicate with language, to reason, to reflect, and debate (and the freedom to change one’s mind) is part of what binds us together as human beings and reflects what is best about us. Attempting to persuade by force or fear is not persuasion at all and merely highlights the worst part of our natures.