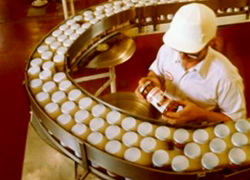 Davis, California. “Technique” is the totality of methods rationally arrived at and having absolute efficiency in every field of human activity. As Jacques Ellul argues in The Technological Society, in such a society the multiplicity of means is reduced to one: the most efficient. The individual participates in society only to the degree that he becomes subordinate to the search for efficiency. Although our civilization sets the highest value on relations, the structures of our world and its real norms favor the antithesis of relationships.

Two recent articles about food in our hometown newspaper caught my attention.  Before I describe them and the relationship I see between them and Ellul’s writing on technique, I want to take you on a short bike ride in the area around my town.

My town runs about 6 miles, east to west, straddles a major interstate, a long-haul, and a commuter train line.  It runs about 3 miles north to south, bisected by another (smaller) “freeway.”  Cycling around town is fun, but the real treat lies in reaching the outskirts and suddenly finding oneself surrounded by fields, and, a bit farther away, orchards and vineyards.  The fields change with the seasons, but here in the valley there is almost always something growing.  Head east this time of year, and you will run into safflower and rice; to the south, corn, tomatoes and sunflowers; on the west side, more tomatoes, peppers and then plums along with all manner of tree nuts; north, still more corn, more tomatoes and various clovers and grasses. Further on, you will reach vineyards on the edge of the coastal hills.  Later in the year we will have more clover and other grasses, and the time will come for the harvesting of all those nuts. We will crush the wine grapes as the leaves of their vines turn bright red.

With a little water (which we borrow from the coastal hills, and draw from the ground and the river) things shoot up quickly around here, an occurrence that never seems to stop.

Right next to these fields is one of the world’s largest and most prestigious public universities, which specializes in crop, soil, and food sciences, agricultural economics and nutrition. Major food companies have research sites around town (we rode by a few).  A well-educated populace lives on these tree-lined streets, comprising a very participatory form of local government.

Now that our bike ride is over, let’s return to the newspaper articles. The first, “From Farm to Table,” discusses a new USDA study showing that farmers keep a greater share of the money spent on their products when they sell what they grow directly to consumers via farmers’ markets and community supported agriculture (CSA) groups. The article also shares that farmers benefit more from selling directly to supermarkets than from selling to wholesalers. (I will acknowledge that I am surprised that it took a study to demonstrate any of this.)

The same study, however, shows that it costs less in terms of “fuel consumed per pound of produce” to ship food longer distances on larger trucks—the kind wholesalers use—from larger monoculture farms. Here we make our first encounter with the “efficiency” criterion that Ellul understood so well.  Just as it is more efficient to ship food long distances in large quantities to markets where people are eager to pay more to get it because they can’t grow the same foods nearby, so local stores also find it less efficient to buy directly from local farmers instead of from wholesalers. The article quotes the manager of a local food co-op who wants to buy from local farms. He says, “It’s harder to buy locally. . . . Instead of one invoice and one bill from a single wholesaler, the co-op wheels and deals with 50 little farms all over the area.”

Thankfully, this co-op is committed to “buying local,” and does so because its owners (of which I am one) place a high level of importance on buying locally. This co-op, however, is only one of 6 or 7 “supermarkets” in town, and the only one with these commitments.  Though the manager doesn’t say it directly, it is simply not efficient for him to purchase from all those small suppliers.  Still, the fact that the co-op is doing so shows that Ellul’s efficiency imperative is not an inevitable condition. We can choose to live differently.

Unfortunately, food sold through the co-op, our local farmers’ market, and the CSAs seem to be a very small drop in a huge local food bucket. The second article, “Farmers Ask for Support,” makes this clear. The article is not about local farmers asking for some kind of government handout.  Rather, it is a cry for help in a world in which they are smothered from all sides. The article starts with these words: “Local agriculture must connect the dots between farmers who grow tomatoes, walnuts and peaches and the people who eat them. Trouble is: There aren’t enough dots.”

It continues to make the sad and startling data point that, “Local residents eat 2.2 million tons of food each year. However, less than 2 percent of that comes from local growers.”

To call this crazy—as one of the farmers in the article does—is clearly an understatement.  Connecting the dots—or, perhaps, putting a puzzle together, is difficult. For example, tomato-processing operations have largely moved out of the county because it is more efficient to consolidate operations and truck tomatoes from long distances for processing than to process them closer to the fields in which they are grown.

Crazier still, while all these fruits and vegetables sit nearby in our fields and orchards, up to 25% of our population register as obese. Only 16% of us are eating the recommended 2 or more servings of fruit and 3 or more servings of vegetables per day.[1] In other words, we are eating highly processed “food” that starts in our fields, gets shipped away, is processed elsewhere and is then sent back loaded with lots of non-food products(to prolong its shelf life), fat, and sugar.

Our farmers are under great pressure to sell their land to developers who want to build homes for the growing numbers of people who want to move to this valley.  Because it is harder for farmers to survive on their land, they are sorely tempted to sell it to these newcomers and to developers.  This forces local government to raise money from private sources to preserve the farmland (as farmland) because the people farming it can no longer afford to farm it.

This is a crazy and puzzling system indeed.  Clearly “individual” decisions about efficiency have led us down this path.  As Ellul warned, the “système technicien” is made up of highly specialized technicians who know their work very well. They know the “one best way” in their area of specialization. They know their piece of the puzzle, but they do not concern themselves with the puzzle as a whole or whether the puzzle contributes to community development.  As Joyce Hanks, interpreting Ellul’s The Technological Society observed:

“True development leads to consequences that are not predetermined but that stem from value judgments hammered out by a group working together.  Growth based on Technique and efficiency, however, tends to produce something like puzzle pieces that no longer fit together, at least not in the way we intended them to.”[2]

Ellul would say that our faith in Technique and efficiency created the puzzle pieces.  Our highly specialized data-driven, empirically correct, and narrow decision-making processes built the system that, arguably, serves no one’s human needs. As Ellul argued, this occurs because Technique does not evolve with the end of human good in mind.  It pursues no end, in fact, and is only concerned with the “best” means. Hanks points to a solution, wherein the farmers, elected officials, agricultural economists, soil scientists, consumers, and store owners sit down together and “judge the values” that should drive our food system. This means, essentially, that we must discuss the proper ends of our food system.

First, we need some old-fashioned confession and repentance. I use overtly religious language because our faith in Technique is religious.  We need to confess that our allegiance to “efficiency” has brought us here. We need to acknowledge that Technique has not liberated or helped us to better development, but has given us a scattered system of puzzle pieces that we cannot piece together in a way that serves human needs.  Confession will free us to discuss what we all really want, and what we, as humans, really need.  It will be akin to an A.A. meeting for the addicts of efficiency, where we can stand up and say, “Hi, I’m Robb and I’m addicted to the narrow quest for efficiency–the “one best way,” and then we can move on and put our collective lives in order.

I know that I have much to learn and to understand. In the meantime, I am going out to the fields around my house. I will work with some farmers and find out what I am missing and begin my apprenticeship in the fields. Then, I am going to sit with some friends and neighbors to talk about growing and consuming food, and what it is we all really need. Hopefully, I can help bring folks together to begin piecing the puzzle together.

Robb Davis has worked in the field of maternal and child health, nutrition and food security, mostly in West Africa and the Indian Subcontinent, for nearly 25 years.