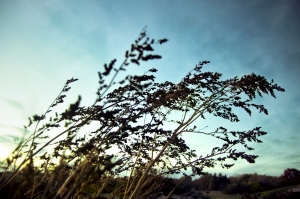 Louisville, Kentucky. Wes Jackson has a new book just out—Consulting the Genius of the Place: An Ecological Approach to a New Agriculture—and it is a reminder that there are radicals and then there are radicals.  Dr. Jackson is radical to the very tip of his twenty-foot prairie root.  His research organization, The Land Institute, is hybridizing and testing major grain crops so that someday—maybe as soon as 2019—we who have lived all our lives on annual grains will have the option of farming perennial ones.  We could find ourselves with an orchard of wheat.

We are not there yet.  But if the Institute can develop hybrids with the necessary resilience and yields, perennial grain crops could be a green revolution far more extensive than the Haber-Bosch process to turn natural gas into fertilizer, or the one credited to Norman Borlaug.  And unlike both of those enormous changes in farming, perennial crops would be sustainable, particularly with regard to soil loss, fertilizer, and water use and quality.  (What perennial grains may need to stave off disease is harder to know.)

In all the many centuries humans have farmed, our most essential staples have always come from annual crops.  Unless we were nomadic herdsmen or Long Hunters, our caloric base came from annuals; the staff of life is not olive oil or hazelnuts or lamb, but the wheat and barley of our bread (or rice).  Dr. Jackson makes the case that from the very infancy of our agricultural culture in the Fertile Crescent, farming was extractive, and that this kind of agriculture requires the mining of our soil, which we have often done without any attempt to return nutrients to it.  Our civilization, with all its flowers and cankers, has fed itself upon these millennia of mining.

As our Earth sets itself to fed 7 billion people now, and then the 9 billion projected in the next few decades, the deficit we are running is going to catch us.  There will not be enough natural gas or water to coax the necessary calories out of our depleted soil.  Dr. Jackson’s hope and belief is that perennial crops will radically slow or reverse that deficit spending.

He thinks intermediate wheatgrass (a wheat relative) will be the first crop ready for wide planting, and the Institute has trademarked a variety called Kernza™ .  After that may come wheat itself, grain sorghum (a feed crop here in North America and a food crop in Africa and Asia), sunflowers, rice, and a soybean substitute called Illinois bundleflower.

And now that all environmentally conscious eaters are supposed to drop “food miles” as a standard and move on to the much more complicated Life Cycle Assessments (LCAs), Dr. Jackson’s observation of his associate’s attempt to do an LCA on their Sunshine Farm is telling.  (More about the Sunshine Farm study can be found here.)  Marty Bender’s LCA of that farm attempted to assign an energy cost to every single component in the production cycle of its food, to give a complete picture of how much energy it took to produce what people could then eat.

Assigning a portion of the cost of a piece of equipment was the easy part, but Dr. Bender went on to assign travel and manufacturing energy costs to parts, and even to the extraction of the ore used to make machinery or tools.  Dr. Jackson says they knew the process would be hard, but “[w]hat we failed to appreciate is how quickly the ‘scaffolding’ of civilization becomes so elaborate and energy intensive and so unknowable.”

They completed the study and assigned all the costs they could, but in the end a certain amount of energy use was not discoverable.  Which means that we, just like our government, are knowingly living beyond our means, but without any way of understanding just how much.  That fact will send most of us straight for the nearest distraction, as an ethical and ecological nut too hard to crack.  It has sent Wes Jackson and his colleagues out to the field, to dig.

Eating for Another Fifty (Centuries)