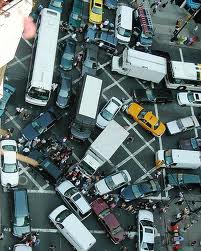 Kearneysville, WV. With the mid-term elections looming, the Tea-Party surging, and the Democrats worrying, it might be worthwhile to consider what’s at stake. After two years of undivided Democratic government, even the party faithful are significantly less optimistic than they were during those heady days when “change” and “hope” were still abstractions and therefore capable of eliciting wide-spread faith. The faith has dimmed for many. The hope has faded, and (to make a trifecta) the love has cooled. The talking heads have all declared that the Republicans stand to make significant gains.

If the predictions are correct and the Republicans assume control of the House of Representatives, the nation will face the prospect of gridlock—the one condition that, given current political conditions, seems to offer the possibility of restraint. The word, itself, suggests a traffic jam so intractable that motion, either forward or back, is impossible. Such immobility might at least serve to halt, or at least slow down, the frantic rate of spending that has rocketed the national debt into the stratosphere and dashed any hope that fiscal sanity can be achieved in the near term.

So gridlock is good. Or it might be said that gridlock is the least bad given our current political culture. But surely this suggests that something is amiss. Let me suggest three factors contributing to our current state of affairs.

1. Loss of common good. The language of common good has fallen on hard times. Thinkers from earlier ages employed the concept with assurance, for they rooted their political philosophy in a theory of human nature that affirmed that a) humans share a robust array of common ends and that b) the realm of politics provides a necessary venue for the common pursuit of those ends. To the extent that modern conceptions of human nature have lost any sense of the “commonness” of our ends, the language of the common good has been pushed aside. If human beings are seen primarily as creatures that, by an act of will, create their own individual realities, then the language of common good will invariably be eclipsed by the demand that individual freedom (characterized merely by my free-floating desires) be continually expanded. On the other hand, a polity oriented to the common good will be populated by citizens willing to sacrifice short term individual goods for long term common goods. This will create a context within which the flourishing of all can best occur. Bereft of the concept of the common good, all that is left is the politics of sheer power, which is merely the aggregate of the politics of sheer desire. Ironically, over the long run a politics of power reduces individual freedom, for as power expands, the space required for freedom necessarily contracts.

2. Special interest politics. The loss of any conception of the common good will manifest itself practically in the politics of special interests, which, by definition is contrary to the politics of the common good. Today every particular interest has a vocal advocate championing the continual expansion of public funding. Elected officials have powerful incentives to accede to the demands, for they have a special interest of their own: re-election. Thus, the multitude of special interest groups find a willing partner in elected officials. Both need each other to best accomplish their desired aims: continually expanded funding increases the relative power of the special interest and by pleasing enough special interest groups, a legislator can facilitate his own re-election. Again, politics becomes merely an assortment of power plays for personal gain rather than a corporate attempt to pursue a common future.

3. Loss of robust debate. Christopher Lasch understood that democracy will fail if citizens do not share a common life, which is to say, a common culture. Healthy democratic life requires robust discussion about the means to achieve the goods commonly agreed upon as fitting for human beings. If no common life exists, if there is no common culture that unifies a people, discussion becomes far more difficult and naturally tends to erode into power grabs suited to benefit the private good of some at the expense of the (now forgotten) common good. Lasch is adamant that robust debate requires a) public places that foster conversation between citizens who meet as equals, and b) a sense that individual citizens have not only a stake in the democratic process but the on-going ability to effect political outcomes. Only when these conditions are met will citizens seek to be well-informed about the issues of the day, for information is only sought when it is deemed useful. Thus, the obvious decline in civic literacy is, according to Lasch, a consequence of a pervasive sense that individual opinions about important matters don’t really matter. The decline in public places suited to conversation (for example, the rise of the shopping mall and the decline of the public house) is merely an indicator of rational choices by citizens who have no real ongoing connection to the political process.

So what can be done? There are, of course, no easy answers and no quick solutions. But let me suggest three related concepts that need to be part of the discussion.

1. A revitalized understanding of citizenship. Citizenship requires more than faithfulness at the ballot box. Citizenship requires an on-going and active participation in political life. One obvious problem arises when politics is seen primarily in national terms. In such a context, active and meaningful political engagement is far more difficult than when politics is seen primarily in terms of human scale political institutions where individuals regularly discuss and decide their corporate future.

2. A revitalized vision of localism. Citizenship is best expressed in face-to-face interaction with fellow citizens. Such interaction, of course, makes possible the robust conversations necessary for a healthy democracy. According to Lasch, such conversations also have the effect of cultivating the virtue of common decency, which extends far beyond the narrow limits of politics proper and serves to make citizens good neighbors. It may, in fact, be the case that citizenship and neighborliness are flip sides of the same coin. It is also undeniably true that the idea of the common good is more imaginable when framed in the context of human scale communities instead of a national abstraction.

It may be that gridlock is the best hope for the near term. However, there are hopeful signs that Americans are tired of the cynical politics of special interests. The on-going economic trials along with the looming entitlement crunch may, in fact, provide a catalyst for a renewed conversation about the common good, the limits of power, and the conditions necessary for a healthy democracy. Until that happens, gridlock may be the best option. But that’s not a very hopeful slogan.