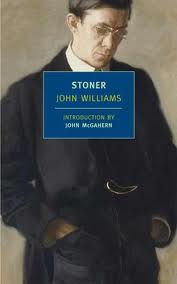 In a very fine revaluation that appeared in this summer’s edition of the Sewanee Review Mel Livatino, a professor of English retired from Truman College, admits he didn’t read John Williams’s novel Stoner (1965) until thirty-three years after it was published. He came to it “in a singular way—through the tears of a rigorous literary critic.

“In 1998,” he says, “I looked up at the man under whom I had studied romantic poetry a quarter-century earlier. I remembered him as an incisive and demanding literary critic. The second time we met over dinner he asked me if I had read Williams’s novel Stoner. I hadn’t, so he began laying out the story.”

I am not going to lay out the story here, or say anything more about the very moving episode in which Professor Livatino relates his being enjoined by his mentor to read this fine novel. Both the novel and the revaluation are available to anyone who cares to procure and read them. And as for the reading of them both I can only say that doing so merits my meager endorsement.

What I am going to do is add my voice to those who have recommended this novel and then say something about a scene in it that I haven’t been able to shake from my sight, a scene that bears upon the contemporary university if anything does.

So, briefly, the recommendation: Stoner is a serious and somewhat elegiac novel about an academic life that stretches between the two world wars. Its title character is one William Stoner, a poor farm boy who to his own great surprise discovers in college that he is called, as it were, to teach English literature—and to do so in circumstances that are neither glamorous nor distinctive.

But that Stoner should be so little known is utterly baffling. I myself did not read it until forty-five years after it was published, or about a week after I read Professor Livatino’s revaluation, which was only the second reference to the novel ever to penetrate the thick granite of my skull. And even then the first had occurred only a few months prior: a friend of mine, an editor, mentioned it to me in glowing terms, though he himself was only part-way through it.

So to conclude part one of what I am going to do here: Read Stoner.

Now to part two: there’s a scene in the novel that gets at this treating of the university as if it does in fact matter, about which I will now offer a few remarks that could get me in trouble. But then good university men rarely say anything that doesn’t get them in trouble, so here goes.

Stoner is an examiner at the orals of a graduate student, Walker, whose continuance toward a Ph.D. hangs upon his passing. Walker has already demonstrated himself to be a fraud—or, to be more precise, a bullshitter—in one of Stoner’s seminars. He also happens to be a cripple, as is his sponsoring professor in the orals, one Lomax.

Walker does a very impressive job of answering Lomax’s examination questions, in which, of course, Walker has been primed and prepped. Stoner himself is impressed and, it should be noted, pleased.

The second examiner is an untenured member of the department, and his first question leaves Walker uncomfortably speechless until Lomax reframes and enlarges the question, at which point Walker embarks upon a blustering answer that gets him through but that worries his second examiner and confirms in Stoner’s mind that Walker is the poser Stoner originally thought him to be.

By the time Stoner’s part of the examination begins, Stoner is reluctant to do what he knows he must do, which is, by questioning, expose Walker as a fraud and, in doing so, make the case against his continuance.

The dismantling of Walker is marvelously drawn. It begins with a question about Anglo-Saxon versification, which, of course, Walker cannot answer, and ends in the easy territory of Walker’s own professed specialty, which, like the Anglo-Saxon, Medieval, and Renaissance periods on which Stoner questions him, turns out to be a literary terrain with which Walker is entirely unfamiliar. He is a specialist—that is, an idiot—a fake of the first water. That he should be an heir to Stoner’s strict discipline clearly horrifies Stoner.

After the examination Walker is excused so that the examiners may deliberate. During the deliberations Lomax triumphantly announces that Walker has clearly passed; the second examiner timidly declares the performance unimpressive, and Stoner insists that Walker be failed. There’s an impasse, and the decision is deferred. But during the deferral Stoner learns that Lomax will soon be appointed the next department chairman, which means that his, Stoner’s, refusal to pass Walker will have lasting career implications, which, indeed, it does. (Read the novel to find out how and why.)

During the deferral period Stoner reminds a friend of his, then the acting department chairman caught uncomfortably in the middle of this departmental—but also moral—battle, of something a mutual friend of theirs, one Dave Masters (who died in the Great War), had said long ago:

“The three of us were together,” says Stoner, “and he [Dave Masters] said—something about the University being an asylum, a refuge from the world, for the dispossessed, the crippled. But he didn’t mean Walker. Dave would have thought of Walker as—as the world. And we can’t let him in. For if we do, we become like the world, just as unreal, just as … The only hope we have is to keep him out.”

In other words, Dave Masters was saying: guard the tower.

Stoner works here, as does his creator, John Williams, with an old literary archetype: physical deformity is a sign of moral deformity. Walker is not just a cripple. He is a moral and an intellectual cripple, and so is Lomax.

And what happens when the moral villains, who are necessarily intellectual frauds, are admitted to the asylum—that is, to the University?

I will not belabor the point. Nor will I suffer any obtuse reader to accuse me of saying that cripples are necessarily moral scoundrels. That is not the point.

At stake here, at this signal moment in the novel, is the soul of the university. Will it be handed over to those whose hands are withered and useless, or will it be given to those with the intellectual and moral dexterity to govern it?

Noting who knows what is tricky business, and there is great danger in supposing that everyone must know what you know. But Williams’s novel makes one thing clear. Bluster–intellectual sloth and dishonesty–won’t cut it.

And if there’s one thing we have in higher education today it’s a superfluity of bluster, a veritable surfeit of bullshit.

The temptation is to say that this applies more to the humanities than to the sciences. And maybe there is some truth in that. But then I found myself in the uncomfortable position once of having to explain to a pretty competent scientist that Roger Bacon and Francis Bacon were different men who lived in different centuries—and who, indeed, inhabited different worlds.

As William Stafford once put it: the darkness around us is deep.

From The Multiversity: Plato