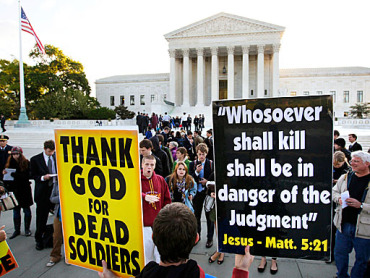 Here in Kansas, we are unfortunately very well acquainted with Topeka’s own Westboro Baptist “Church” (I put “church” in quotes because whatever their actual name or legal status, what they clearly are is a small, inbred, weirdly self-aware yet profoundly pathetic cult). State Democrats and Republicans alike have been active in trying to shut down or at least place limits upon the church’s ability to conduct ugly protests at and around military funerals and other public–and often personally solemn–occasions, and their actions were joined by national politicians on both sides as well yesterday, when Reverend Fred Phelps and his tiny, deluded flock came before the Supreme Court as part of the case Snyder v. Phelps. But of course, once a case reaches the highest levels of the nation’s judicial system, questions of police barriers and respectful distance and all the rest of the matters which have been subject of legislation, though still relevant, shrink in importance; what matters, ultimately, is the interpretation of fundamental constitutional principles: does the First Amendment protect protesters at a funeral from liability (Snyder won an award of nearly $11 million in punitive and compensatory damages after suing Phelps and Co. for picketing near the site of the funeral for Snyder’s son, who dies while serving in Iraq) for intentionally inflicting emotional distress on the family of the deceased? Or, in other words, does the First Amendment provide cover for pretty much any, perhaps even all, emotional harms?

It’s a given that nobody, I mean nobody, likes or agrees with what the WBC people choose to do. (Their appearance at the Supreme Court yesterday, complete with their ridiculously inflammatory signs and claims, was, by all accounts, a scary, perverse circus show.) But given the scholarly and institutional forces reluctantly lined-up on behalf of WBC–the American Civil Liberties Union, The Thomas Jefferson Center for the Protection of Free Expression, most major media companies and outlets, and more–and given that this (in many ways obviously “conservative,” whatever that may mean in this case) court nonetheless recently ruled 8-1 that prohibitions of graphic and offensive videos of animal cruelty are protected by the First Amendment, I think it rather unlikely that WBC will lose this case. Which frustrates me, because I’d like to see them–and the great majority of their First Amendment absolutist supporters–get seriously spanked.

Dahlia Lithwick, whether you love or hate her thoroughly opinionated reviews of Supreme Court arguments and decisions, is a tremendous judicial reporter. She notices things which so many others miss. But in her coverage of Snyder v. Phelps, she couldn’t see what the overwhelmingly majority of people of her class and profession and outlook also don’t see: that speech–and I mean here, specifically, the individual right to express themselves–is, frankly, only a second-order good, not a primary one. After insightfully detailing the oral arguments, she sums it up pretty simply: people are being caught up in the fact that what WBC does is hateful, and hate is not to be trusted; it gets in the way of the basics. “They are struggling here with the facts,” she concludes, “which they hate. Which we all hate. But looking at the parties through hate-colored glasses has never been the best way to think about the First Amendment. In fact, as I understand it, that’s why we needed a First Amendment in the first place.” This is not an unusual conclusion; it’s a standard liberal, individualist, pluralist one. Adam Cohen repeated it in Time Magazine: “it is important for the court to rule that this kind of expression lies within the First Amendment. We defend it not because these ideas are particularly worthy of being protected, but because all ideas, even the most loathsome, are.” Or forget today’s journalists; just go back to John Stuart Mill: “If all mankind minus one, were of one opinion, and only one person were of the contrary opinion, mankind would be no more justified in silencing that one person, than he, if he had the power, would be justified in silencing mankind” (On Liberty, chp 2). Start tossing around that kind of language, take it absolutely seriously, and the result will be…well, among other things, it will be Supreme Court decisions like Federal Elections Commission v. Wisconsin Right to Life, or the notorious Citizens United v. Federal Elections Commission, in which speech–your right to say it, your right to buy it, your right to hear it, your right to sell it–is considered essentially sacrosanct, irregardless of the emotions–or the inequities in power and access–involved. Comfortably liberal commentators like Lithwick may not see the connection between defending a fundamental right to speak offensively and defending a fundamental right to all the advertising anyone with deep pockets can possibly buy, but the connection is there. Which is another reason why this court will be unlikely to side with Snyder against WBC’s hate. Too bad.

I’m not attacking the First Amendment here; I simply disagreeing with one particularly common, frustratingly extreme way to interpret it. Defenders of current law can, of course, come forward to point out the many exceptions and further considerations that might complicate my wish. It is true that we have a variety of precedents, restricting speech when a speech act poses a burden upon the necessary, ordinary business of others, or when it presents a threat to the preservation of public order through inciting violence or intimidation. But this case doesn’t involve any of that; it involves someone claiming emotional harm due to the speech (which, it must be said, he only learned about after the fact through television reports; local laws prohibited the Phelps from carrying their signs into the funeral home or along the funeral procession route). And the fact remains that the law, and very likely the Supreme Court, just won’t take “hate” or “emotional distress” seriously as a good worth defending, or at least worth balancing against the imperative of defending even loathsome opinions. But they should.

The basic argument is one of pluralism, and defending minorities. If someone can sue another person for ruining their day by claiming that they’re a fag, a slut, or whatever, then doesn’t that give those in possession of majoritarian understandings of those terms enormous financial power over those who are not? Possibly. Or, then again, possibly not. Wouldn’t it be reasonable to argue that the pluralistic world of opinions in which we inhabit isn’t, in fact, one single uniform undistinguished marketplace of ideas? That, perhaps, some arenas of action and expression, both spatial and temporal, aren’t actually quite part of the public square? The truth is, of course, that we already accept and acknowledge that fact; this is why church’s are allowed to own property from which they can ban certain acts of speech which they find offensive to the beliefs they promote and contrary to the peace of mind of those who attend that church. Why can’t funerals–and I don’t just mean the actual graveyard; I mean the whole mediated environment within which a funeral is conducted–be similarly seen as property isolated from the vigorous expression of individual opinion? Because, to do so, would be to invest public space with some sort of meaning…some definition of the good? As in something like this:

The process of burying one’s dead partakes of a space and activity that have a meaningful purpose, a purpose which includes the emotional wellness of the bereaved, but also the social benefit which comes through such respectful bereavement; this is exemplified by, among other things, the respectful treatment graveyards receive when city planning takes place, the fact that we countenance police involvement as escorts for select funeral processions, and indeed the respectful behavior of motorists in pulling over or slowing down as those processions go past. As those emotional and social purposes are undermined by those who would use the occasion of a funeral to attract attention to their particular ideas, it would be wise to limit the applicability of First Amendment protections to those would engage in such disruptive or even just demeaning actions in these kind of spaces. The claim that funerals, by being announced in news outlets, therefore involve “public figures” regarding whom different constitutional rules apply is silly argument–the whole point of the funeral is for the public body to make possible and thereby experience, even indirectly, the good which bereavement provides to the whole. Surely most public figures, and most public paces, should be open to diverse individuals’ exercising the full range of their protected First Amendment rights…but not all of them should be.

Could such language come from Chief Justice Roberts? I doubt it. Maybe from Scalia, but even there I don’t think so; he and Thomas may like playing around with natural law and originalist ideas which don’t hold with Millian liberalism, but in the end what I’m asking for here is something significantly more communitarian and Aristotelian than our current constitutional order is likely to be able to admit. And I don’t know: will that likely result make me despair, make me think that, once again, the primary of the individual, and the abuse and inequality and alienation which that frequently makes possible, has been wrongly defended. Perhaps a little bit…but overall, I’m a member of a liberal society, and being liberal–being respectful and careful when dealing with the many differences and points of potential conflict between individuals, and trying to treat them all as fairly as possible along the way–is a good things to be. I just don’t think it’s the best thing to be, not in all cases, not even in most cases…and at the very least, when it comes to funerals and the feelings of those who are putting loved ones into the ground, certainly not in this case. There are higher, better, more meaningful, more communal goods available in this case. Would giving priority to those goods in Snyder v. Phelps open up oppressive possibilities in the future? If we were talking about the heavy hand of the state, then I’d consider that a possibility (by no means an obvious one, but a potential one, I agree). But we aren’t actually talking about that; we’re talking about torts, and damages, and the rules allowing for such. Some people will not find their bereavement harmed by offensive lunatics making asses of themselves 50 yards away. But some might. And maybe bereavement is an important enough good that, in such cases, the community ought to let the laws serve the interests to those being targeted by ugly speech, rather than those doing the speaking. After all, in an attention-driven 24-hour media environment, they will likely always be able to speak more than enough.

Free Speech as a “A Delicately Manicured Garden”: A Review of...

Few v. Many: The Topsy-Turvy World of Judicial Demographics