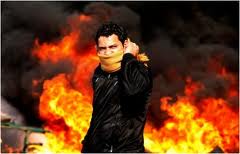 “Predictions,” saith The Philosopher (Yogi Berra) “are always dangerous, especially if they concern the future.” And I might add (not being nearly the philosopher that Yogi is) that the predictions we make about the future are dependent upon the stories we tell about the present. The stories will attempt to cover the facts, but the facts always bear different interpretations; the art of history is essentially the art of good story telling.

So here are two stories about current events which lead to entirely different predictions. In the first story, the people of the Middle East, fed up by decades of misrule and encouraged by Twitter, Facebook, and cell phones, have finally found the gumption to stand up to their corrupt rulers and install a true democracy, one that will actually count the votes and permit all sorts of parties. The bright sun of democracy will bring freedom and happiness, peace and prosperity to lands that haven’t seen much of this in recent history; its warmth will spread throughout the Middle East, stabilizing that troubled region which is so vital to our oil-dependent industrial economy.

This is a plausible and attractive story, and certainly one the protesters believe about themselves, judging from the placards. Once they get “Mubarak Out,” they will get freedom in, and all will be well. However, there is another possible version of the story. Rising bread and oil prices, along with reduction of government subsidies of food and fuel to meet IMF requirements have driven the poor to destitution and the middle class closer to poverty. The peoples of these nations have lived with dictators for a long time, but these rulers were able to provide at least a modicum of material security. With the rising prices comes political instability.

Dictators have long understood that bread and circuses could substitute for economic freedom. With the advent of television, the circuses have become a 24/7 affair, but food is becoming scarce. This has something to do with rising demand in the developing countries and the general disruption of weather patterns. But there are other forces in play. 50% of the grain traded in international markets goes to ethanol production or cattle feed. In the choice of whether to feed cows or people, we have chosen cows; it is as if we had a world-wide democracy of “one cow, one vote,” and “equal rights for Fords.” But for all that, the world is awash in food, and we might have been able to feed the cars, cows, and people, were it not for the speculation in the commodities markets. Goldman Sachs now plays the same games in the commodities markets that it did in the housing markets, even to the point of creating a “CCO,” the commodity version of the infamous CDOs, collateralized debt obligations, speculative trash which it markets to the same gullible audience it did just a few years ago. Indeed, commodity index funds jumped from $13B in 2003 to $260B in 2008. And it has grown since then.

The two stories lead to widely differing predictions. The United States has always feared democracy in the Middle East, believing that it would lead to “one man, one vote, one time.” After that, Sharia Law would reign supreme and war with Israel would be universal foreign policy. Hence, we have propped up a series of autocrats in the region with huge bribes and subsidies; Egypt is the second largest recipient of foreign aid, after Israel. Others believe that a civilization as old as the Nile and as cosmopolitan as the Egyptians would never allow themselves to be ruled by the Imams. But then, I seem to remember that they said the same thing about the Persians.

If the second story is closer to the truth, then dictatorship is not the problem and democracy is not the solution, as desirable as it might be for other reasons. The signs that say “Mubarak Out” should really say “ انه الاقتصاد، غبي“, “It’s the economy, stupid!” (Lest anyone overrate my erudition, that comes from Google Translate.) But for some reason, people are reluctant to frankly admit their own economic interests; it seems more respectable to say, “I want to vote” than to say, “I want to eat.”

We in the West have a mythical belief in the power of democracy to cure kleptocracy and to bring peace. These myths are held in the face of the facts. Far from being peaceful, the 20th century, the bloodiest in history, was characterized by a series of wars to make the world safe for democracy. Which we did, but we made democracy unsafe for the world. And it is true that we have very little criminal corruption in this country for the simple reason that we have legalized it. The backward politicians of the Middle East take bribes; our enlightened politicians take campaign contributions and plush jobs on retirement. Getting caught with your hand in the till is a sign of low imagination, since there are plenty of legal ways to accomplish the same thing.

Democracy legitimates the ruling class in a way that no other form of government can. But it is not necessarily “democratic” in the sense of expressing the “will of the people,” assuming they have a unified will. Rather, power tends to go to the best organized and financed, and in Egypt that is the Muslim Brotherhood. Even if the Brotherhood doesn’t rule directly, it will likely have a veto over who does. Even Mohamed el Baradei, the West’s favorite candidate, is making happy talk with them.

The economic problems will be beyond the abilities of the new rulers, democratic or not, to solve. But governments have another way of uniting their people, and that is to find an outside enemy. Two candidates for this high office present themselves: the United States and Israel. From the standpoint of many in the Middle East, that’s the same thing. Both are highly vulnerable. While the Middle East doesn’t control all of the oil, and Egypt controls none of it, the entire region is vulnerable to the same process, and the aging leadership of the House of Saud is ripe for the same kind of fall. It will not take much of a disruption to cause chaos in the West. Terrorism will not be a tenth of the problem that even a 10% reduction in oil supplies would be.

As for Israel, there may be many who would like to see Version 2.0 of the Holocaust. However, this time the Jews are not powerless; they have a strong army and nuclear weapons. But on the other hand, they have a small population and a narrow strip of land against the sea. Not to mention undying hatred on both sides; it does not bode well for peace.

So here are two scenarios: one leads through democratic enlightenment to peace and prosperity, and the other through intractable economic problems to war and disintegration. Choosing one will get you labeled an optimist, choosing the other a pessimist. It remains in the future to see which one will be labeled the realist.

A Sheeshah Pipe for the Porch?