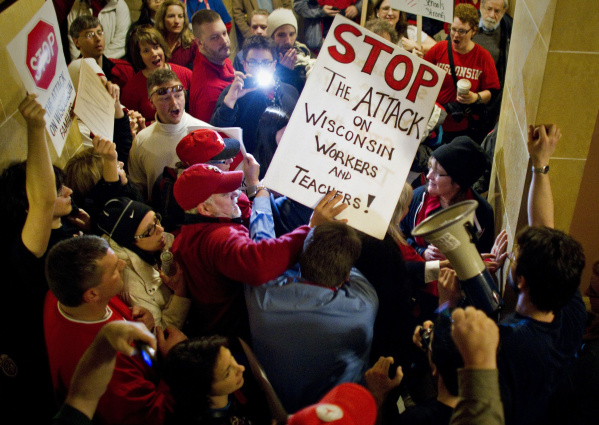 Wichita, KS
The battle may be distant from here, but considering that in the early hours of this morning, the Wisconsin Assembly passed the “Budget Repair Bill” which tens of thousands of protesters have spent the better part of two weeks demonstrating against, perhaps something needs to be said. It’s a bill that, should the Wisconsin Senate approve it (which it can’t under present rules so long as enough Democratic senators stay in hiding, robbing the Senate of the quorum needed to vote), and should Governor Scott Walker sign it (which he, of course, would in an instant; it’s his bill, after all) would, among other things, significantly cripple the power of most public employee unions in the state.

Given that the unions being targeted by this bill have long since signaled that they’d be willing to accept the cuts and budget reforms that the governor and Wisconsin Republican legislators are looking for, it has become fairly clear that this struggle is fundamentally about political power, not fiscal realities, however important they may be. It is a question about whose power over our economic landscape is to be respected, and to what degree. It places on one side the bondholders and bankers and CEOs who ultimately (and, perhaps, legitimately) demand a certain level of unregulated austerity if making investments and expenditures is to continue to appear appealing to them, or the workers and homeowners and citizens on whose behalf those programs and regulations–despite their admittedly often less-than-stellar track record–were designed:

The deal Wisconsin made with its state employees was simple: Accept lower wages than you could get in the private sector now in return for better pensions and health-care benefits when you retire. Now Walker wants to renege on that deal. Rather than stiff the banks, in other words, he wants to stiff the teachers–but the crucial twist he’s added, the one that’s sent tens of thousands of workers into the streets, is that he wants to make sure they can’t fight back once he does it.

The reason you can’t stiff bondholders is that they can make a state or country regret reneging on the deals they’ve made. They can increase borrowing costs far into the future, slowing economic growth and, through the resulting economic pain, throwing politicians out of office. That gives them power. An ordinary teacher does not have access to such artillery. Unless, of course, she’s part of a union.

There are, to be sure, plenty of reasons to be concerned about the power of public employee unions–they can, like all other large organizations, become self-interested and corrupt, and thus stifle the productive actions of individuals and communities concerned with achieving common goods. The same can be said, of course, about all unions, in the same way the same can be said about all business and corporations, all school boards and church committees, all bureaucracies and agencies. But some say that public employee unions are an especially troubling case; that because their ultimate employer is technically themselves, and all the rest of us–everyone who pays taxes, in other words–public employee unions face a unique moral hazard, a very specific incentive to capture votes rather than negotiate, and thus act like an institutionalized political party within the bureaucracy of the state, rather than a “countervailing power” within the open market. Trade unions are a classic example of just such a power, and at least potentially a highly democratic example as well: organizing individual workers into a force which corporations, who enjoy the benefits of capital (and thus also the political power which an electoral system open to massive donations, never more so than now), would have to reckon with.

Does that logic fall apart with public employee unions? Many prominent opponents of the power of large corporations, including the father of the New Deal himself, President Franklin Delano Roosevelt, thought so; the Wagner Act was about empowering the workers at private firms to demand respect from business owners, not enabling government employees to do the same. But perhaps all the changes in the American economy over the past three generations–some for good, many for worse–have changed this calculation as well. Manufacturing jobs have disappeared, as the country has grown wealthier and the technology making it possible for businesses to move their work to poorer (and thus, for them, more profitable) parts of the world has proliferated. Much of our country’s economic lifeblood is now tied up in service and information-related jobs, in health and education and sanitation and livability and public spaces and environmental resources. Many of those jobs have been, from the beginning, rightly considered a public–that is, a government–responsibility, rather than a private one; many others have been moved, over the decades, from corporate hands to public ones (and some, to be sure, have also been moved back again). And that presents the question of whether people who hold those jobs, whether at the local or state or federal level, ought to be able to organize, to bargain collectively, to strike if necessary–to act as their own “countervailing power” against the government (which arguably has long been dominated by corporate and Wall Street interests, whether the Democrats or the Republicans were in control, anyway) that employees them. (See more on this issue here.) 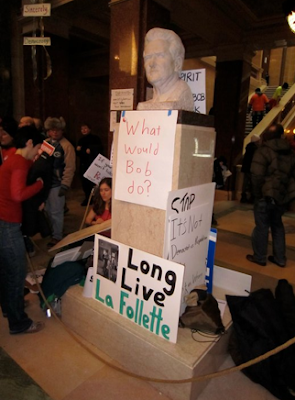 For folks like myself, folks attracted to the ideas of local power and economic democracy, the fact these demonstrations have erupted in Wisconsin is significant. Robert “Fighting Bob” La Follette led Wisconsin as a U.S. representative and senator, as its governor, and as a presidential candidate for years. He was very much a Progressive, and for perhaps most who identify themselves as localists or decentralists today, the Progressives were the worst kind of bureaucratic busybodies. But the fact remains that the causes which he fought for and against–against imperialism and powerful corporate trusts and child labor, for civil liberties and union protection and municipal independence–are very much part of the foundation upon which most of whatever real respect for “place” which has survived in the mostly urbanized, mostly interconnected America of today was originally built. (The union protesters and their sympathizers in Wisconsin absolutely recognize this fact; Governor Walker is, perhaps, trying to pass that historical reality over.) Intact neighborhoods, family-supporting wages, local authority: there were, of course, many components to all these–stronger churches and civic organizations being one, a less acquisitive and individualistic social and economic mentality in the first part of the last century being another–but one would have to engage in a great deal of historical revisionism to claim that the laws which protected and empowered unions, the laws which guaranteed the rights or workers or organize and make demands and negotiate with those in power, didn’t play a huge role as well.

One might hope that, in a different socio-economic world, local democracy and economic independence wouldn’t depend upon defending, as I believe at the present moment they must be, something as potentially troubling as public employee unions. Christopher Lasch noted years ago the inevitable difficulties for and the dangerous backlash against any truly authentic community populism which comes when the efforts to empower workers through trade unions result in the emergence of “Big Labor.” Libertarian-minded individuals, who presumably ought to favor the freedom of association which unions at least potentially represent, tend to the current argument (especially the argument involving public employee unions), as ambiguous at best: clearly unions are an important weapon in the arsenal of individuals and communities seeking to protect themselves as the powers of capital and corporations, but the strategies and structures of today’s unions leave much to be desired–among other things, they set aside any more radical (populist or distributist or socialist) critique of the contemporary capitalism, in favor of a never-ending (and, in a world where globalized neoliberalism is dominant, mostly losing) battle over wages and living conditions. Some smart observers suggest that unions have outlived whatever usefulness they may have once had in terms of making a more equal and more empowered America, and that other strategies are now called for.

For myself, I see a continuation of the same tension that has been, to my mind, front and center throughout this ongoing crisis in global finance capitalism, and all the ways in which most of us–as workers and homeowners and voters and farmers and teachers and citizens–are implicated in it: what kind of compromises with the system should we make? How far should those compromises go? What kind of economic or political tools should we employ in those compromises? Or the present system–a system of large and perhaps systematically polarized and paralyzed governments, of corporate powers which are perhaps constitutionally incapable of considering questions of democracy and community when tabulating their bottom lines, of resource depletion, of credit-and-debt-dependent economies, of globalization and dislocation and consumption on a massive scale–so worthless or so near collapse as to make any attempt to reform or work through or within it pointless? I’m not able to resolve that tension; perhaps none of us can, until the crisis of peak oil, or some other crisis, renders the issue moot. But until then, I know what I believe in: I believe that the capitalist market, for all the good it produces (and it produces a lot), makes inevitable a distribution of power between employers and employed which is unequal–and that inequality, invariably, will work against the long-term flourishing of families and neighborhoods and communities within which the employed, those without independent access to politically-empowering and protecting wealth, dwell. Unions are certainly not a perfect tool for addressing this imbalance of power; they are often a defective tool, in fact. But they remain a tool, and one worth defending. For all the caveats and concerns we may have about the proper way to consider relations between business and government and labor at the present time, I would hope no localist worth his or her salt would blithely agree with those who would wave “larger fiscal realities” to distract us while they take that tool away.