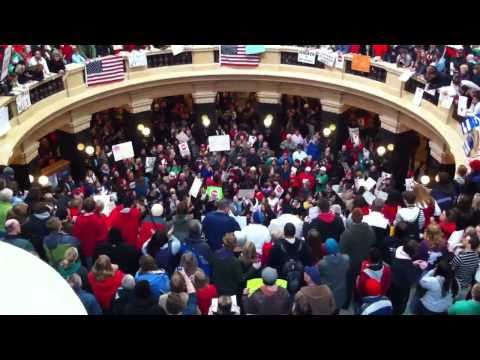 Tucson, AZ. Far from my native Midwest, which sometimes seems to be working out the details of its final collapse after decades of decline, and far from the equally depressing backroom corruption and social-democratic clientalism of Pennsylvania, I have appreciated Don Knauss’ ambivalent reflections posted here, which I came upon just after reading today’s edition of the Arizona Daily Star.  In that paper, I encountered Jason Smathers’ Associated Press report on the “Army of Volunteers” who have groped their way up to the frozen steppes of Wisconsin to join the heroic crusade of the public unions to defend their hard-won dignity and powers.

Our implausibly named reporter quotes Carol DeGrave, 53, “a middle-school media coordinator in Green Bay.”  DeGrave tells us, “she’s protested for the last three days because she’s afraid that without collective bargaining, her school district will cut her position.”  The overtly principled DeGrave explains: “We’re not going to shut up . . . because this is wrong.  It is such an injustice.”

I react to these lines, not in surprise that reporters apparently now use contractions, but because DeGrave’s comments so neatly indicate the great spectacle that modern politics and statescraft reveals to us.  If the protest is motivated by particular parties’ seeking to protect their particular interests, in this case the immense benefits and job security that inhere in a public employee’s position and union membership, that is one argument.  If the protest is motivated by a question of justice, that is another.  Either the protest is a defense of private interests, legitimate or otherwise, or it is a defense of the principle of justice as an ordination of the common good of society.

The history of labor unions, whether of public employees or those working in private enterprise, is of course fraught with ambiguity as to which of these possibilities is most sound.  Most of us would concede that the particular interests of this or that person necessarily bears some relation to justice and the common good, and that, therefore, the good of society as a whole may be advanced by the honest representation of workers’ interests unions can make possible.  On the other hand, most of us also have seen that advocates of unions frequently take a page from the Saul Alinsky play book by trying to pass off what is frankly personal or class interest as a question of the common good.  If DeGrave is protesting simply because she is worried that she may lose her job, then her activity has a very reasonable motivation, but is not in any evident sense a question of justice; in a word, she is speaking in defense of what she desires not necessarily in defense of something she deserves and may claim as hers by right of her intrinsic dignity as a person and citizen or by right of her having performed some service in the past that merits, in recompense, the guarantee of continuing employment unconditional of the State’s capacity to pay her.

Let us observe, with commonplace despair, that the kind of anti-logical elision found in DeGrave’s statement is typical of a time such as ours that has no idea what are the coordinating principles that make for social order.  But let us go a step beyond that.  Justice can only exist between persons who have the same common good; indeed, it is a principle that emenates, among persons, from a shared common good; the “common good” thus refers to that good all persons share in.  But most arguments in our political realm, such as it is, appeal to the “common good” speciously.  They suggest that, by privileging party X at the expense of party Z, the “common good” can be obtained.  In doing so, they refer by the term “common good” not to the good the members of a community actually hold in common, but to an abstract generalized society, the common, that stands distinct from and in opposition to the individual persons who constitute it.  In this usage, party X must suffer that the “whole” may realize itself.  Persons who speak thus generally conceal, in other words, that they do not believe in a common good; they believe only in the interests of particular bodies, usually in the supposedly intrinsic divisions of class.  As such, when they say “common good” or “good of the whole” they really speak of the projected outcome of sustained class struggle.  There is no common good in this Marxist analysis, but only the good of a class that is meant eventually to triumph over all others.

The modern political tradition in general sustains this Marxist conclusion.  Or rather, we have largely assumed since Machiavelli, that the common good can be no more than an appearance of order maintained by the playing-off-each-other of opposed forces, and so the modern tradition gave birth to various theories of capitalism, republican government, and class struggle.  I would ask, at this late date, can we imagine a politics founded on a principle other than the competition of irreconcilable forces or parties?  A politics founded on a shared conception of the good for the individual person and the common good of persons?

One point of entry into the imaginative exercise such questions invite is to ask, in light of the comments quoted above, whether we can see the incoherence of a union representing citizens-qua-employees against themselves as citizen-qua-citizens of the state of Wisconsin?  Could we put ourselves in DeGrave’s position and still believe that she might benefit from the passing of legislation that would put in doubt the existence of her own job?

As Knauss’s essay suggests, we may also ask, is Gov. Walker in earnest about the fiscal integrity of the State of Wisconsin, or is he, too, diverting attention from his throwing spoils to some plutocratic associates by making appeals to a fictitious common good?

I ask these last question sincerely, even as I am reasonably confident no middle school should need a “media coordinator,” and though I incline to believe that public employee unions by their very existence intimate that there can be no shared or common good amongst people in the modern State.  Does this mean that society exists only nominally, as a blanket term for a congeries of competing parties?  Or does it suggest that, at the very least, there is something perverse in modern statecraft, which dreams of private vices competing and negating each other to beget an ever-more-ellusive public virtue?

I conclude with what may appear a digression.  What I find so exhillerating about Walker’s actions, and those of his peers in Indiana and Ohio, is that the natural limitations of the individual states are forcing people and politicians to think politically, i.e. their finitude forces them to make choices about the good.  They cannot, after all, run endless deficits, as the Federal government can, on the mere strength of the dollar’s reserve-currency status and the (almost) perennial bully-power made possible by the astronomical size of the military.  Thus, the spectacle in Wisconsin may at once expose the limitations of the modern political tradition as a theory of mere competing class interests, and expose as well what politics looks like when people fulfill their natures as rational animals capable of asking questions about their good, and as political animals, who sense that such questions must be worked out in the public realm.  We see, that is, that politics appears more messy and more real; it makes for the most violent spectacle when it seeks to answer questions that would order society to its common good; and it suggests that politics and the good appear in the clearest focus when they are dramatized at the proper scale.  Here is hoping for the day when, by calamity or pure common sense, we work out all political questions at the level of local communities and states and leave the behmemoth technocrats no powers to exercise or problems to solve.