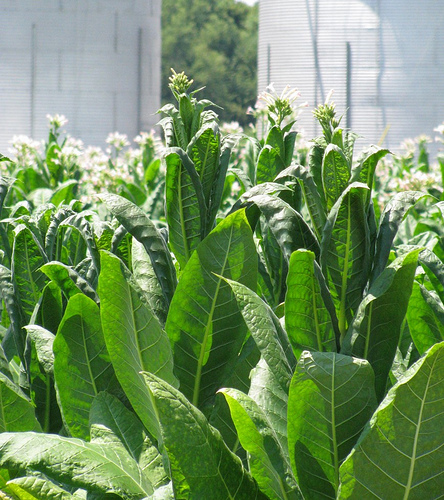 Henry County, Kentucky. In July of last summer I was a part of a farm tour in Western Kentucky. It has been years since I spent any real time in that part of our state. I was in the countryside around Kentucky Dam Village in Marshall and Benton Counties and it is beautiful. Even though the drought that would take hold of the rest of Kentucky was fully in place there, I could still see what a lush countryside it is.

Because Kentucky’s biggest farms are in the Western part of the state I was surprised to see how “underfarmed” the area is. I suspect this is true all over the country; overfarmed or underfarmed, there is very little well-farmed. My own county of Henry doesn’t feel as depopulated as this area does because of “string towns” all along our main roads, but there is less and less farming going on all the time.

The farm tour I attended was arranged for a five-person state committee that I serve on. We toured a huge granary, a dark-cured tobacco farm and a chicken and hog concentrated animal feed operation (CAFO). The visit to the tobacco farm and the granary were familiar to me. After a lifetime of tobacco tours I have never tired of hearing a farm family talk about their work. Usually, representatives from the local land grant university also speak, in addition to county extension agents.

Our visit to the dark-leaf tobacco farm was unusual in that the farm family did all the talking. The husband and wife who farm the place, their children and a hired man who had worked with the family for years were all there proudly showing off their place. Until eight years ago my husband, children and I raised burley tobacco, as had eight generations of both our families. Not only did I know very little about the dark-cured tobacco, I had never seen it in the field. It is a beautiful crop. Even on that large scale, 80 acres I believe, it can be irrigated and looked wonderful.

The farm was beautifully kept. The husband and wife spoke of generations of farmers who had grown the same crop on that farm. The young man, who had started working on the place as a hired hand in his teens and stayed on into his early 30s, spoke of the farmer’s father’s skill with the crop with the same amount of pride that the farmer himself had. The farm also had beef cattle and forage crops. The incredible amount of work and skill that it takes to finish dark-fired tobacco keeps the scale manageable. The handing down of knowledge from one generation to another was there and with it the hope and care that naturally occurs when people are thinking beyond themselves. These farmers are practicing agriculture, not agribusiness.

Our next visit was to a huge granary. The family who owns the granary is leasing thousands of acres to raise corn. They are also building additional expensive grain elevators. I, of course, have not see this farm’s books but I feel safe in saying that they will not withstand the end of farm subsidies and cheap fossil fuel. The fragility of their farm was clear during a drought. I visited that farm in July and their corn wasn’t making ears. Diversity decreases the risk for farmers and there was none here. This family is totally at the mercy of the vagaries of the “global economy.”

Then we went to the chicken and hog operation. I’ve known about CAFOs for a long time and have been horrified by the idea of them, but I had never seen one. This farm has four chicken barns and two hog barns. As I understand it from reading about operations like this, these were small barns compared to some CAFOs. But when you come from a background like mine, the sight of 3,600 chickens or 1,800 hogs in one place is startling, to say the least. I think those chickens and hogs were as well cared for as is possible in such a system, but inherent in that system is abuse and that can’t be changed by cleanliness or lack of smell.

The animals were separated from the source of their feed. On a diversified farm these animals would roam about in some freedom, foraging for their own food to a great extent; confined in the factory farm they are made dependent on grain grown in large monocultures at a great ecological (and taxpayer) cost. I saw very little livestock in the countryside that we drove through. As I said before, it is to some degree an underfarmed area. I couldn’t help but think how ridiculous an economic system is that has by policy discouraged small farming and encouraged this kind of concentrated stupidity. These animal factories are energy-wasting enterprises at a time when we know we must think about energy conservation.

I would guess that I don’t need to say much about the abuse of animals and nature that occurs on these factory farms. Readers are probably aware that the concentration and separation that occurs overwhelms the restraints inherent in the diversity and balance of healthy ecosystems and good farms.

I would like to say a few things about the abuse of the farmer in the system. In contrast to the first farms we visited, the CAFO was markedly different. Three generations of a farm family were there—grandfather, father and grandson—but they never spoke. Their banker spoke, an extension agent and a representative from the companies that process the farmers’ chickens and hogs spoke.

Most disturbing to me was that the extension agent spoke as if he were an apologist for a company that is taking advantage of a farmer in his community. The representative from the pork company was truly astonishing. He told us that the farmer was a million dollars in debt to his company, and that the farmer’s profit was in the manure he could spread on his cornfields to sell to other farmers. (The problem of that manure is for another time.) He also exhorted us to tell others that these are great places and not to worry about pollution or disease because science would take care of it.

He actually suggested to us all the things there are to worry about in this system and then told us that science—the word “magic” could be substituted here—would solve all problems. He, of course, made the cheap food argument and the feeding-the-world argument, which I have come to regard as pure fantasy. You cannot make a case for feeding people by destroying the source of food. And anyone with any imagination could see that the same amount of meat could be produced in that area by having more farms and farmers raising animals in a sustainable way.

I know from experience the economic pressures that this farmer in Western Kentucky has been under, and I can imagine something of his story and why he is doing what he is doing. I have sympathy and empathy for him. He is being abused as surely as the animals are and the farm is. It is easy to demonize people you don’t know who are doing things you don’t approve of. This is never all right. This farmer is being used as an expendable “resource” in the process of production just as his farm and the animals are.

Marketplace pressure has in large part caused the existence of places like this farm in Western Kentucky and none of us is free of responsibility in that. Thoughtlessness is not excusable. We must face the fact that the interest of farms and farmers is in conflict with the interests of agribusiness and get on one side or the other.

That said, I am on the side of the farmer, including the CAFO farmer in Western Kentucky. He has been lied to. When my family and I raised chickens on our farm in Henry County we realized a net profit of $6,000 on the sale of 2,000 chickens processed over the course of five months. A factory farm realizes a profit of $20,000 to $30,000 on the sale of 1,200,000 chickens. We had no large investment and the chickens improved our farm. They were part of our diversified farm plan. We were finally forced out of business by regulations that allow the CAFOs but not places like ours.

We all have a stake in this struggle. As my father, Wendell Berry, says, “eating is an agricultural act.” The best thing that people who can’t raise their own meat can do is find small producers and buy from them. It may mean you eat less meat, because it is often more expensive, but that is all right. The best way to fight CAFOs is not to support them while supporting small farmers, the closer to you the better. It is clear that to have sustainable agriculture you have got to make sustainable the lives and livelihoods of the people who do the work.

You will be participating in the attempt to understand and support a whole instead of settling for an abstraction. The grain farm and the hog and chicken farm are the result of a modern industrial mind, a mind that refuses to accept any context. Not humanity, not nature, not community; nothing but profit and efficiency. And I believe we now know that it has failed at that. This is not acceptable and we can refuse it. This is our duty and our hope.

Wendell Berry Opts Out of the ‘Culture of Violence’