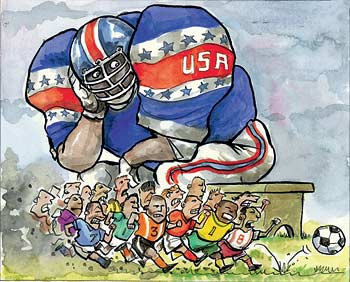 Conservatives are awfully fond of referring to America as a “city upon a hill;” it would be a wonderful thing if they actually made some attempt to understand what that image is supposed to signify.  When it is used by contemporary conservatives, it is invariably intended to invoke notions of “American exceptionalism.”  The preeminence of a city built on a hilltop is interpreted as a kind of superiority, as though it were nation set above other nations, and even above the ordinary historical forces that beset other nations.  A city on a hill thus becomes an apt symbol for a country which enjoys an indisputable superiority in wealth and military power, implying a sort of vaguely providential sanction upon that wealth and power.  The reference to this image by conservatives almost always carries connotations of national self-congratulation, and almost always serves to enhance that most distinctively liberal attitude – complacency.

But this is not at all what John Winthrop meant when he first applied that image to the Pilgrim settlers, in his famous sermon of 1630.  What he wrote was as follows:  “Consider that we shall be as a city upon a hill; the eyes of all people are upon us, so that if we shall deal falsely with our God in this work we have undertaken and so cause him to withdraw his present help from us, we shall be made a story and byword through the world.”  Winthrop intended the preeminence of a city on a hill to signify not the inherent superiority of the Plymouth settlement, but its notoriety. His point was that the whole world would be aware of the outcome of the Pilgrim’s expedition, so that a failure to establish a just community in the new world would inevitably become known throughout the old world, and become an occasion for the Puritan’s enemies to deride their faith.  And that it was quite possible – even probable – that the Pilgrim’s could fail in their endeavor, Winthrop was at pains to emphasize: “But if our hearts shall turn away so that we will not obey, but shall be seduced and worship other Gods our pleasures and profits, and serve them, it is propounded unto us this day, we shall surely perish out of the good land we pass over this vast sea to possess it.”  He did not wish to soothe the Pilgrims’ complacency by extolling their virtues, but rather to awaken their moral vigilance by reminding them of the iniquity towards which the human soul is always inclined, and what would be its catastrophic consequences in their perilous situation.  The image of a city upon a hill is, for Winthrop, the image of preeminent responsibility.

So it is a disgrace of the first order that modern conservatives have so perverted the words of the good preacher to make him seem to mean very nearly the opposite of what he in fact did mean.  Particularly since Winthrop explicitly warns his followers to avoid as a pitfall precisely the thing which conservatives are now in the habit of regarding as the highest of civic virtues – a desire for material affluence.  He implored the Pilgrims not to be “seduced” by “pleasures and profits,” and told them that they must “be willing to abridge (themselves) of superfluities, for the supply of other necessities.”  Moreover, Winthrop dilates upon the necessarily communal nature of the Plymouth project, in a manner which would inevitably be dismissed as “collectivist” by the typical modern conservative: “we must delight in each other, make other conditions our own, rejoice together, mourn together, labor and suffer together, always having before our eyes our commission and community in the work, our community as members of the same body, so we shall keep the unity of the spirit in the bond of peace.”  The profiteering individualism at the heart of contemporary conservatism would have been anathema to Winthrop, and to all the Pilgrim settlers.

That political gravity and urgency which suffused Winthrop’s sermon  – and indeed, his entire vision of things – once belonged to conservatism, but no more.  Modern conservatism has largely undertaken the duties of therapy, bolstering the patriotic self-esteem of the American people, even as they watch their culture become increasingly depraved, their economy increasingly unsustainable, and their liberties increasingly tenuous.  By belligerently asserting “American exceptionalism” at every opportunity, the modern conservative engenders an invincible self-satisfaction in his adherents, who come to believe that such “exceptionalism” entails an exception from the consequences of general imbecility, moral flaccidity, and national financial malfeasance.  Such an ardent promotion of complacency would constitute dangerous nonsense in the best of times, but at this moment in our history, it is likely to prove positively disastrous.

No one can doubt any longer that we are entering into one of the most supremely trying phases in our national history; civil transformation, deprivation, and sacrifice lie before us all, in frighteningly uncertain form.  When these things do come, the American people are sure to react as all peoples historically have reacted to such social convulsions – by looking for scapegoats.  Those who are now repeatedly assuring the American public of their unparalleled virtue are only preparing to make that reaction more volatile than it otherwise would be.  People who are convinced of their own goodness, when they suffer, assume that they suffer undeservedly, and instantly begin searching about for the true culprit in their misfortunes.  A country which has come to regard itself as uniquely excellent will never find anything the least bit expected or merited in some dramatic decline in its welfare.  The citizens of such a country will inevitably interpret their downfall as the work of some powerful and nefarious segment of the population, towards which they will direct a resentment that will be all the more ferocious, for being perfectly ungrounded.  Those conservatives who relentlessly assert the unique excellence of the American people are, knowingly or unknowingly, sowing the seeds of violence to come.

What is necessary at this time is a general acknowledgment that we Americans, having been placed in a situation of unprecedented felicity, have utterly failed to order our society in such a way as to perpetuate and improve our happiness.  We need to admit that there is nothing the least bit unexpected or undeserved about our present trials, but rather that they are the wholly predictable effects of behavior which has been prevalent for several generations now, that these are the sorts of things that happen when a people gives itself over to latitudinarianism, unrestrained acquisitiveness, cynicism, ignorance, disrespect for tradition, selfishness, and pride.  Above all things, we need to confess that we have been woefully negligent of the first duty of a civil society, the proper rearing of the young, and that the incompetent schools and corrosive culture which have successively debased three generations of American minds are criminal atrocities which no decent people would endure for a day.  We cannot pretend any longer to act surprised that generations raised in habits of self-indulgence and irresponsibility prove unable to perform the duties of social life.  We need to confess that even those institutions which are uniquely culpable for the despondent condition of our country – Hollywood and the universities, for instance – are patronized and admired by the population at large, a population which thus becomes similarly culpable.

Similarly, we need to stop pretending that the corruption of our political establishment is an external imposition upon us, rather than the outgrowth and adequate reflection of our own civic deficiencies. Every one of us needs to reflect on the various ways our own lives have become implicated in the grotesquely unjust order which is about to crumble before our eyes.  Every one of us needs to be willing to accept full responsibility for the evils we will experience in the times to come.  Such austere self-criticism is the thing most needful now, and those voices should be most welcomed, and most approved, who urge us most strenuously towards that spiritual discipline.

The failure of modern conservatism is the failure to provide those voices.  Its sin is the sin of unrepentance.  But it is only repentance – the willingness to “think again” – that can save us now.  We must turn therefore to the wisdom of the past, to the guidance of minds impressed with such fundamental humility, to find our way now.  We must learn from such sources how all appearances of security and stability in a world such as ours are inherently deceptive, that even in the finest season, the maintenance of a civil social order is a work as doubtful and as dangerous as a journey into a dark, untrammeled wilderness.  We must be reminded that, at all times, “there is set before us life, and good, death and evil,” and that our abiding prosperity hinges desperately, at every stage of our national existence, upon how firmly and consistently we choose the former, and reject the latter.  And we must never, ever forget, that the only hopeful and dignified course available to such creatures as we are is in “obeying His voice, and cleaving to Him, for He is our life, and our prosperity.”

Principles Over Power: Lessons from Bush and Nixon

Theonomist Doesn’t Even Rhyme with Terrorist