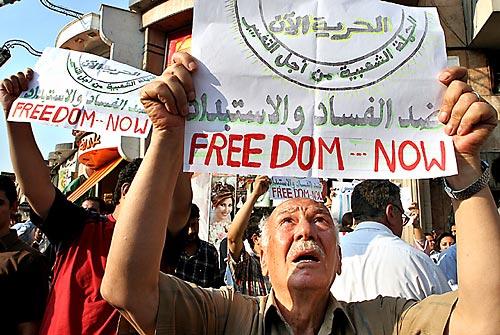 The regime changes in Egypt and Tunisia have been hailed as victories for democracy, as proof of the liberalizing power of social networking media, as testimony to the power of nonviolent political action. All of that they may indeed be; but the events in Egypt and Tunisia also illustrate a major defect in our economic thinking, one from which we should draw a very different and much more cautionary conclusion.

The flaw in neoclassical economic theory that’s behind the Middle East’s winter of discontent is the acceptance of gross domestic product (GDP) as an indicator of citizen well-being. A recent poll by the Gallup organization, reported in early February, found that despite significant gains in per capita GDP in both Egypt and Tunisia, the level of well-being of their citizens has been falling over the past decade. This decline in well-being certainly played a role in the unrest that put citizens in the streets, challenging their governments.

In Egypt, between 2005 and 2010 per capita GDP rose from $4,762 per year to $6,367. In Tunisia it rose from $7,182 to $9,489. But both countries saw a significant decline in the percentage of the population that is classified as thriving according to a standard, well established measure.

To rank as “thriving,” respondents have to have positive views of their current place on the ladder (seven or higher) and positive expectations about the future (eight or higher). Below that, respondents are ranked as “struggling”—their “ladder-future” expectation is lower than the present, or both values fall below the thriving range. Below struggling is “suffering,” people who report their place on the ladder at four or below.

The Cantril Scale correlates with objective markers of well-being. Thrivers have fewer health problems and fewer sick days, while reporting less worry, stress, and anxiety and more enjoyment, happiness, and respect. Those in the struggling category report more daily stress and worry about money than the “thriving” respondents, and more than double the amount of sick days. Those in the “suffering” category are more likely to report that they lack basics like food and shelter, more likely to report physical pain, and more likely to experience higher levels of stress, worry, sadness, and anger. They have more than double the rate of diseases compared to “thriving” respondents—and a lower life expectancy.

In both countries, as GDP rose steadily, the number of citizens categorized as “thriving” fell. In Egypt, 29% of people reported themselves as thriving in 2005, but that number fell to just 11% in 2010. In Tunisia, Cantril Scale data are unavailable prior to 2008, when 24% of the population could be classified as thriving; that number fell to 14% in 2010, a 40% decline.

The nonviolent revolutions in both countries may have been motivated less by abstract commitment to democratic freedom than by widespread experience of a declining standard of living and increased economic insecurity, even in the face of rising GDP. This result is paradoxical within neoclassical theory:  a rising GDP is supposed to signal rising levels of well-being.

But there are several sources of disconnect between GDP and well-being.  One possible disconnect is grounded in the methodology of the Cantril Scale:  it measures expectation, and as incomes rise, expectations may rise more rapidly, leading to a decrease in subjectively reported well being.  To this there are two avenues of response.  First, the Cantril Scale correlates with objective measures of well-being, like health (physical and mental), as measured objectively by doctor visits, sick days, earlier mortality.  Second, well being or its absence, like poverty and wealth, are experienced as relative, not objective, values.  You are happier with what you’ve got if no one else in the system has got significantly more.  It does no good to tell someone who is below the poverty line in the U.S. that they are better off than the impoverished of an underdeveloped country—we experience our well-being in relation to the norms and averages we see around us, not in comparison to distant others.  Well-being belongs to that class of phenomena for which the perception is the reality.

Two other factors are more relevant to explaining this result that seems paradoxical within the standard model of economic thinking: (1) increasing inequality in income and (2) increasing food prices.

Thanks in part to the Soviet-built Aswan Dam, which interrupted the regular cycle by which Nile delta farmlands were re-nourished by annual flooding, Egypt has been in recent decades the single largest importer of grain in the world. When Russia announced an embargo on grain exports (the result of unprecedented, climate-change-driven weather that scorched into ruin nearly half of Russia’s usual annual harvest), the price of food shot up.  Even before the embargo, the average Egyptian family spent 38% of its income on food (compared to 7% in the U.S.). Most simply couldn’t afford the higher prices, and hunger and food insecurity spread through the middle class. Higher food prices registered as an increase in the monetary value of all goods and services bought and sold in the economy; thus, perversely, GDP counted higher food prices as a positive contribution to well-being.

Because of that basic flaw, a rising GDP did not mean a rising standard of living. And even if GDP were a more accurate measure of material well-being, it would still be mathematically possible for a majority of people to become worse off economically as per capita GDP rises. This happens when increasing income inequality denies gains to the majority—when the increased material well-being accrues to those at the top.  In Egypt and Tunisia, that mathematical possibility became an economic fact—and a politically charged social condition.

Declining standards of well-being are politically destabilizing, and lead naturally enough to sweeping support for regime change. In Egypt and Tunisia the regimes happened to be despotic, and the call for change came as a commitment to democracy, an end to corruption, and demands for civil liberties. But within democracies, declining standards of living can have the opposite effect. Open and institutionalized systems of regime change—voting—will absorb the discontent for a time, but if the decline lasts too long, or  can’t successfully be blamed on a particular party in power, pressure grows for stepping outside established parties for new, radical, revolutionary approaches.

History shows that democratic forms are no proof against a slide into repressive forms. In Germany in the 1930’s, a declining standard of living contributed to the rise of the Nazi party; Hitler was democratically elected to the office of Chancellor (and then proceeded to establish himself as Fuehrer).

As America’s perpetual-growth economy faces the reality of ecological limits, as climate change imposes costs and decreased well-being on us, as food and energy and other resource prices increase because of the inexorable logic of a declining Energy Return on Energy Invested at the physical foundation of our economy, we face the prospect of a widespread decline in our standard of living. This dynamic lies at the root of this fact:  Americans coming of age today are among the first generation who can’t be confident that they will be better off than their parents.  By one widely used measure of well-being (the genuine progress indicator, which deducts loss of ecosystem services and other “disamenities” from the national accounts), the American standard of living has flatlined since the 1970s, despite continued strong growth in GDP.

Thus the cautionary lessons from Egypt and Tunisia. GDP is a measure of the commotion of money in an economy, not a measure of delivered well-being. If sustained or rising well-being is what is economically and politically desirable, we should measure it directly, instead of counting on GDP to do the job. And if we accept the idea of popular sovereignty—that governments rule with “the just consent of the governed,” as Jefferson put it in our Declaration of Independence—we must recognize that as the middle class goes, so goes the legitimacy of the regime in power. No system of government—despotic or democratic—fares well when the majority of its citizens experiences a declining standard of living.

This thought must trouble anyone who values civil liberties and democratic freedoms:  when increasing the standard of living depends on continual expansion of the economy’s ecological footprint, that increase must at some point come to an end. The examples of Egypt and Tunisia invite us to ask: what then?

The Gain is Gloss: Thanks to FPR and Its Readers