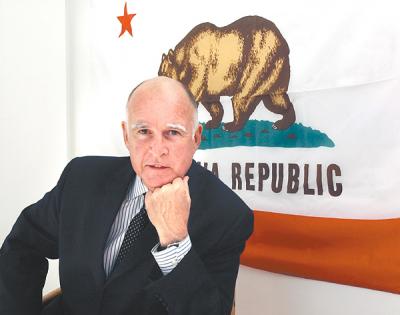 These days I care more about the results of local sporting events than I do national or out-of-state elections, but I was pleased that Golden Staters put Jerry Brown back in the governor’s chair.

Brown’s austere unhipness has always appealed to me, despite the soporiferous Linda Ronstadt, despite his “explore the universe” vapors, despite his failure as attorney general to defend his state’s electorate in the Proposition 8 case, even despite the Dead Kennedys’ hilarious “California Uber Alles,” in which President Brown unleashes the Terror:

Knock knock at your front door

They have come for your uncool niece!

Jello Biafra, who yawped that lyric, changed his mind about Brown, as did the great Chicago columnist Mike Royko, who dubbed Brown “Governor Moonbeam” but later realized that the Californian’s eccentricities masked—or maybe revealed—a curious, undogmatic, and bold politician.

To me, the California governor is redolent of those politically halcyon mid-1970s, when Democratic primaries were dominated by pious peanut farmers, pro-Second Amendment exposers of CIA skullduggery (Frank Church), and the quicksilver Brown, while neocon dreadnoughts like the SS Scoop Jackson sunk blessedly of their own terrible weight.

Jerry Brown was the last populist to make himself heard in a Democratic presidential primary, when in 1992, advised by the wise old republican Gore Vidal, he thumped the tub for a flat tax and peace and against NAFTA. Later, as mayor of Oakland, Brown encouraged local poets and painters and dancers to render their city in all its peculiar glory.

He was ridiculed for such pronouncements as this: “I want to emphasize place. Re-inhabit, going back, learning what was before, what is, what isn’t, what could be because of its physical location, its place in the economy, its fauna, its flora, its racial, ethnic, and cultural diversity.” A syntactic smashup, perhaps, but what’s so funny about Brown’s meaning?

Jerry’s dad Pat Brown was a boring New Deal Democrat whose lone service to the republic was the temporary sidelining of Whittier Dick Nixon in the 1962 California gubernatorial race, but we might hope that father taught son a lesson in division.

Disgusted by the Orange County troglodytes whom he blamed for electing Ronald Reagan governor over his incumbent self in 1966, Pat Brown unloaded on Southern California in his querulous book Reagan and Reality. Brown confessed that as governor he had been “inclined to support a bill in the legislature to split California into two” but held off in the interests of “conciliation.” His tongue loosened by forced retirement, ex-Governor Brown declared, “I have reluctantly concluded that California should be divided legally into two states, north and south.” Division was “at least ten years off,” he wrote in 1970, but he foresaw the “ultimate establishment of two states.”

He was not the first such visionary. No sooner was California dragged into the Union in 1850, over the protests of the Spanish-speaking agriculturalists of its southern region, than hoppers were filled with bills to carve the massive state into more easily governable pieces bearing names such as Shasta, Columbia, El Dorado, and Alta California.

Assemblyman Andres Pico’s 1859 proposal for a referendum on fissioning the state at the Tehachapi Mountains was passed by both houses of the state legislature and signed by the governor. The referendum was overwhelmingly approved by the citizens of the would-be Territory of Colorado, as southern California was to be denominated, but the terrible swift sword of the Civil War intervened, and California, unlike so many young men of the day, was not severed.

By the early twentieth century, northern Californians didn’t need a demographer to know which way the population boomed. The largest city in the south, teeming with prohibitionist newcomers hostile to the mining industry and its seamy overbelly, was reviled by San Franciscans as “Puritangeles.”  Bills to halve the state kept coming, and the bills kept dying, though they achieved highwater marks that are the envy of other split-state movements. As recently as 1992, voters in 27 of 31 mostly northern California counties affirmed an advisory ballot question asking if they wished California to beget two states. (I go into all this in mind-numbing detail in my opuscule Bye Bye, Miss American Empire. Buy it for Arbor Day, won’t you?)

During last fall’s campaign, Jerry Brown mused about a “design change” in California government. The state is inhumanly large, its bureaucracy inscrutably dense. The steroidal Austrian who preceded Brown could no more imagine a radical alternative to Big California than he could plausibly imitate an American. Pat Brown’s notional son, on the other hand, just might avenge the old man’s defeat. C’mon, Jerry: think small.

*This column first appeared in the April 2011 issue of The American Conservative (www.amconmag.com). Subscribe!