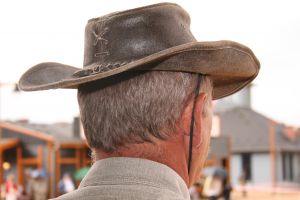 Rockford, IL. Winters in Northern Illinois can be brutal.  I’m sure Minnesotans would roll their eyes at that statement, but Floridians would nod in agreement.  Anyway, I’m a born-and-bred Illinoisan, and I’m still not used to our winters.  So during the tail end of last winter—February, to be precise—my good friend Emily and I began planning a summer road trip.  We needed something to get us through the icy month or so that remained.  A road trip through the American West had been a lifelong dream of hers, so we set a tentative departure date of August 1, 2010.

Our plan was to make Denver the first night, see the Rockies, and then head straight for the California coast.  From there, we wanted to spend a few days snaking up Route 101 before hitting Seattle and heading home through Montana.  One of the spots that I wanted to hit on the route back was Lewistown, Montana.

When my great-grandfather came to the States from the Netherlands in 1911 with his new bride, they traveled first to Lewistown, where his brother had said there was work to be found milking cows.  By 1919, my great-grandfather had established himself, and the banker recommended he buy his own farm.  He did, and for two years all went well enough.  The summer of 1921, however, saw very little rain, and the first snow arrived in September.  My great-grandfather was forced to buy hay from Minnesota.  His debt accumulated until, in 1923, he filed for bankruptcy and left town to find work in Kenosha, Wisconsin.  He sent for my great-grandmother and the children the following year, and so ended my family’s time in Montana.

My grandfather was born in Lewistown in 1920, and he can still remember enough of the ranch to tell stories about riding his new pony, or breaking the ice off the water bucket in the one-room schoolhouse.  I heard these stories many times during Sunday dinners.  Driving to Lewistown would take Emily and me a little out of the way on the route back to Illinois, but it was well worth it to see the place my family started out. While researching, I stumbled across a link on the  Lewistown Chamber’s website to the “25th Annual Cowboy Poetry Gathering,” which was being held the same weekend that Emily and I would be visiting.  I made a mental note.

August 1 rolled around.  Emily and I both drive clunkers and didn’t trust them for anything over a couple hundred miles, so we rented a Chevy HHR.  Not a pretty car, but it had plenty of room for a tent, food, and lanterns.  We loaded up the HHR and hit I-39 South to Davenport, Iowa.  Over the next 13 days, we traversed 15 states and covered some 6,000 miles.  We stayed with friends some nights, camped others, and found hotels when necessary.  After trailing up the Oregon and Washington coast, visiting Pikes Place Market and Spokane, and white-water rafting in Missoula, we landed in Great Falls, Montana, for the night.  We woke up early the next morning, grabbed some much-needed coffee, and took the HHR up Highway 87 West toward Lewistown.

Lewistown today is an agricultural center of some 6,500 nestled amongst the mountains of central Montana, a couple of hundred miles off of any Interstate highway.  When my great-grandfather first came there, the town was full of immigrants—Albanians, Germans, Croatians, a few Dutch—all trying to tear a living out of that wild land.  Emily and I turned onto Main Street around lunchtime and found our hotel.  The Calvert Hotel has only recently been reopened.  It had once been a lodging house for farm kids who would stay in town to attend school during the week, then take the train back to the family farm on the weekend.  My Great-Uncle John wrote in his family history that he had done just that.  I wondered if I was walking the very halls that he had wandered as a boy.

We arrived with plenty of time to look around town a bit before checking out the Cowboy Poetry Gathering, and I found a plot of land that my great-grandfather had once owned.  Around dinnertime, we headed for the Yogo Inn, where the event was being held.  We bought our dinner tickets from a girl wearing a cowboy hat at the front desk and headed in.

A table near the back of the room still had a few open seats, which we claimed before loading up on barbeque, cornbread, potatoes, and cobbler from the buffet.  A couple at our table introduced themselves as Rollie and Jim, longtime Lewistown residents.  Jim ran the Cowboy Church, held on Sunday mornings before the cowboys went their separate ways.  I explained why we had stopped in Lewistown.

“What was your grandpa’s name?” Rollie asked.

“Hmmm. Not familiar, but check with maybe that guy over there, in the black hat.  He’s been around forever.  He might have known your grandpa.”

I thanked her and we ate and chatted.  Emily and I were almost the youngest ones in the room, and, embarrassingly, among the few who were not wearing cowboy hats.  While we were finishing dinner, the poetry began.

What is cowboy poetry? I had wondered.  That night, cowboy after cowboy—interspersed with a cowgirl here and there, too—stood at the mic to read poetry or sing songs about life on the range.  Most of the work was their own.  Many of the poems dealt with the natural beauty of the state.  Montana is known as Big Sky Country.  Only after you’ve been there can you grasp what that means.  The sky really does look bigger out there, and it must have been awe-inspiring for a cowboy to lie under that star-filled sky on a cold Montana night.

The cowboys spoke of the work itself—calving, feeding, butchering, riding, sweating, laboring in wind and rain and cold.  One cowboy read a poem about meat, and how the rancher and ranch hands always ate the gristliest, toughest, nastiest stuff, so as to sell the good cuts.  Another read of the imaginary cowboy, the one who rode a white horse and whose gear was always clean, and compared that vision to the real life of dirt and muck.  An actual cowboy’s life was a far cry from a John Wayne Western.

They spoke also of the cowboy’s relationships—their friendships with each other, their respect for the boss, their love for the wives and mothers who waited for them.  They provided for each other.  They rode hard for a doctor when one of them had been thrown by a horse.  They helped those women whose men had been injured or killed.

The closing song was an old tune, one that cowboys of years gone by had sung during chilly evenings to lull their cattle to sleep.  I looked around while the man at the mic sang.  The older men were singing along, their faces solemn.

The evening concluded, and Emily and I took our leave.  Rollie and Jim hugged us.  “You ever come back to Montana, and you have a place to stay,” Rollie said.

We live in uncertain times.  I suppose that has always been the case, or man has always thought that to be the case of his particular age.  But I wonder if the world has ever known a people as thoroughly dependent as we are.  We don’t grow our own food.  Most of us lack the knowledge to do so.  We can’t raise our own cows, butcher our own meat.   We can’t build things.  A good many of us have no idea how to start a fire or how to get from point A to point B without GPS.

“America” as we know it may be failing.  The dollar may collapse, China may come calling to collect her bills, North Korea and Iran and Russia may get their acts together and manage to lob a nuke at us.  Our leaders are more and more dictatorial, and less and less concerned with leading.  Cyberterrorism, a full-scale attack on our nation’s poorly defended food supply, the complete failure of the economy—these may all happen, sooner than any of us would like to imagine.

But the cowboys of Lewistown, Montana?  They’re a model to follow.  They have a culture, a place all their own, and they are striving to preserve it.  To that end, they gather once a year to celebrate their shared past.  They visit with old friends, and they welcome new ones.  In their song, they remember what their lives used to be like.  They keep a record of roping cattle, and of looking at the skies for direction, and of comforting each other when a cowboy falls.

Come what may, those cowboys are going to be just fine.

Nicole Kooistra is currently pursuing graduate studies in English literature at Northern Illinois University.  She hopes to indoctrinate the youth one day on the beauty of a good story.