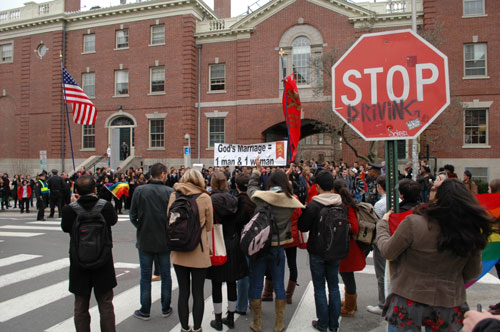 Devon, PA.  I just received a link to a video that records the encounter of members of the TFP (The American Society for the Defense of Tradition, Family, and Property) with the insouciant and zealous undergraduates of Brown University.  It has everything: the selfrighteous squeals of the “gay marriage” undergraduates, an evident meathead who destroys a TFP banner and then runs away.  Spitting.  The video is worth examining in its own right.  I link to the page where readers may view it at TFP at Brown University, because Youtube has apparently removed the video without explanation.  As I watched it, it stirred the following reflection:

In my most recent FPR essay, I discussed Tocqueville’s account of individualism, which he describes as a “calm and considered” philosophical belief that society is a meaningless and uncompelling term, in consequence of which one turns inward to one’s immediate family (nuclear family) and a few others toward whom one bears affection.  Tocqueville himself associates this condition with the hypermobility of the Americans of the 1830s–a condition that has approached orthodoxy (or pathology) in our own day.  Lacking the stability that a landed aristocracy and a widely distributed hierarchy of duty and fidelity provide, and consequently lacking enduring intergenerational communities, Tocqueville observed that Americans move about in their compact nuclear units, while those units themselves dissolve and reconstitute every generation, glued together not so much by “local habitation and a name,” but the unstable but real bonds of natural affection.  The loving but dissoluable family unit, he saw, served well to allow Americans to seek their fortunes in a society largely given over to the love of money and a deep sense of insecurity about the endurance of any shared institution.

What Tocqueville observed then has continued ever since.  In consequence, most persons have never lived in a place where real community exists.  They rather have moved through aggregations of individualist units called “communities” only in name.  They understand townships as nodes centered on highway exit ramps, areas where one may stop to work or consume or even to sleep, but which are essentially instrumental on the long drive to success.

One effect of being reared in an isolated nuclear family within a great mass of equal but indifferent fellow human beings is that one comes to doubt the relevance, authority, or authenticity of any claims upon oneself, save those that are based on personal affection.  Regardless of whether same-sex “marriage” ever becomes the legal fiction of our land, most persons have already assented to the principle on which it is based: the only thing requisite for a binding familial union between two persons is sincere affection (needless to say, the “binding” may be dissolved should that affection abate).  To speak of marriage’s broader social function, or the inadequacy of feeling as a basis for (rather than a complement of) the indisoluable tie of man and wife that makes possible the coming-into-being and the sustaining of households across generations is, at present, to speak a language that makes sense to almost nobody.  Most Americans bear a close resemblance to the Clark Griswolds, for whom the intelligibility of the immediate family provides a place to stand and mock the mysteriously connected but largely unintelligible cousins, grandparents, and great aunts who invade one’s home at Christmastime.  Who are these old, eccentric sacks of dust to whom, we are told, we are related?   We perist in the asking, because of the strange if slight affections for them that we can no longer explain away or justify as binding.

Despite Americans’ hypermobility, I am told that the majority of Americans still live out their lives within a narrow geographic area (about ten square miles).  The truly mobile are still a minority, and yet they are the “elite” minority, who are taken as the norm and exemplar of what our age deems a good human life.  The mobile are those who not only embrace but exploit an ethos that says upward mobility through measurable (quantifiable) merit is the only standard to which one may appeal in decisions of better-or-worse.  In order to be a good person, according to this standard (which most of us already accept even if we are the losers in it), one must disencumber oneself of all loyalties and obligations save that most ethereal one of affection, which itself entails no particular obligations.  Family serves great emotional needs, and therefore provides good therapy as one makes one’s solitary way from childhood to financial independence.  Like everything outside money, for the modern American, family is a kind of therapeutic technique — to be used so long as one feels the need, but no more (Welcome, Krustians!).

In brief, the present American standard for what makes a successful human being (I use the word “successful” pointedly) is one that views what used to be called community — one’s particular people in a particular place with a particular set of beliefs and a particular conception of obligations and goods — as a mere contingent bit of circumstance.  Requiring some sensation of belonging to a community, that person is permitted strong affections for a nuclear family — a nuclear family that is supposed to encourage him, in the words of Walker Percy, to follow his “hopes and dreams” wherever they may take him.  All that last phrase really entails is that the young person should rise through a “meritocracy” in order, at last, to attend an elite university (failing that, a business school) — a place specifically designed to reward those who already assent to a morality of merit and mobility.  Such places are, of course, the source of those who make public policy for our vast technocratic state.  So, it is precisely those who have risen through the absence of attachment to the citadels of achievement who will, in the future, be best positioned to affect the cultural forms and public policies of communities in which they do not really believe.

I find it unsurprising, then, that those campaigning to defend the nuclear family as the social form par excellence (that is, the being that gives form to society) should meet, not only with incomprehension, but intimidation and vitriol, when they enter the citadels of deracinated meritocrats.  For this latter group, the nuclear family is not a social form but a precious expression of one’s elective affections.  For the TFP and those like them, the family is sacred — it is something that cannot be created, but only submitted to and, if mismanaged, destroyed.  For the Brown students, the family is something like an epiphenomenon that simply puts a stamp of formality on consenual, precious, but easily dissolved feelings of affection.

Presumably, for the Brown students, as for most undergraduate students I know, the only real, binding institution is neither family nor country, but the corporate/welfare State.  The centralized technocracy that promises to order and regulate our lives, and indeed to keep us alive, is the only binding institution for them.  The State is distinct from country, because it does not ask of us either personal affection or patriotism, but only that we be docile, while it encourages some few of us to be ambitious.  And, of course, for the deracinated meritocrats, the State offers two great incentives: a) because it is not based on human affection, it will never abandon them in the fashion that they believe all human relations ultimately do; and b) as the tutelaries of merit, they have reason to hope they may one day enter and manipulate that technocracy in their own interests.

They make for a curious character, these deracinated meritocrats.  They become excellent servants of the state but lousy citizens of their communities.  They are positioned to be our “future leaders” (as the nauseating phrase echoes) but they are a more significant practical threat to American communities, such as they are, than any foreign legion of terrorists.  The meritocrat objects, of course, that he has every intention of helping those he has left behind with new social programs recommended by the highest standards of quantitative assessment.  Surely, he says, this is a service far greater than that offered by the poor slouches who remain in their natural communities and pump gas or run the daycare.  What he calls service, and plumes himself by thinking a “gift,” is in fact a force destructive of the communities it pretends to help.

You do not think so?  Look at those Brown students (not their faces, of course: because they are scrambled, but because they do not matter, either: in their book, everyone is the same, alone with his desires).

Their mockery is not directed only against those who defend marriage as a reality unalterable by human choice because determined by the dual-grip of natural law and divine sacrament.  They are counter-protesting against anyone who proclaims anything in this world beyond the power and genius of State administration.  They are dismissing as “bigots” anyone who thinks anything outside the individual is governed by laws beyond those of consensual affection.  They are laughing cynically and in secreted misery against those who cling to the superstitions of family and community, for they believe that nothing in social life endures, and that human life is a story of isolated wills seeking pleasant feelings and the satisfaction of their arbitrary and ever-shifting goods.  They are elite “angels,” who believe a continuous freedom for geographic mobility is one with a complete spiritual freedom.  Those who acknowledge the limitations of flesh and nature are, in their eyes, the unenlightened rural idiots who have simply failed to adjust to the order of “rational flightiness.”  And so, they mock the TFP today like purile sociopaths, though tomorrow, they will be well positioned to counter them will quantitatively tested programs in sexual “health” education.

As a professor, I say to the Brown students: “We get it.  You have been rewarded for learning many things without believing in much of anything, and here is another consequence-free opportunity to parade your emptiness and moral selfrighteousness.  Perhaps you will someday realize that ‘marriage equality’ sounds palatable only because it conforms neatly with your sense of marriage as mere therapy.”

As a father, let me conclude with a paternalistic admonition likely to irritate everybody in an age of relativistic utilitarians: the father who encourages his children to acquire “marketable” skills in order to leave home and “succeed” in the meritocratic system is probably doing the internal organs of those children a favor — oh, they will likely live long! — but he is a lousy father.

Rather than raising children to “succeed” in a future you cannot even imagine, raise them in the forms of piety to the most profound things you can know: to the generations of family who made them possible; to the natural community that may, if not ignored by the placeless, give form to their lives; and to the God who creates and governs all things, and in the thought of Whom alone can we find that which is most sweet and enduring.

What Was High School For Anyway?